Paul Hagen: What's even worse for Phillies than losing to the Marlins? 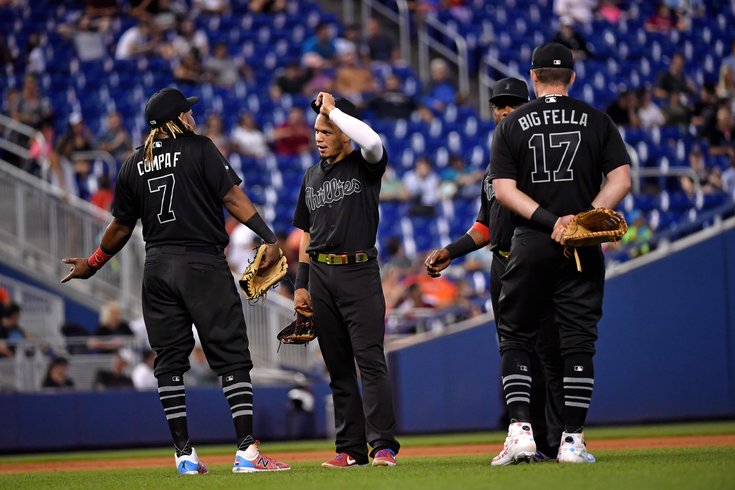 It was an embarrassing weekend for the Phillies in Miami.

Between the first pitch at Marlins Park on Friday evening and the last out late Sunday afternoon, the Phillies painted a vivid picture of what the rest of this season may look like.

You don’t need your Ancestry.com results to show a direct link to Abner Doubleday to know that it was much closer to a preschooler’s finger painting than a Cezanne or a Van Gogh.

And what’s even more troubling is that the problems so neatly illustrated go far beyond losing twice to the team with the National League’s worst record. As unsightly as that was – and there aren’t enough words in a thesaurus to fully describe the ugliness – it ultimately was just three games.

So while the Phillies took another bite out of their rapidly-dwindling margin for error, they’re still just 1 ½ games out in the wild card race with five weeks remaining. On Sunday the Mets, Cubs and Brewers all lost, too.

No, what’s more ominous is that these 72 hours once again put four members of the rotation that opened the season front and center. And it wasn’t a pretty sight. (The fifth, Jake Arrieta, has already been sidelined for the rest of the season with a bone spur in his elbow.)

To recap: Vince Velasquez and Zach Eflin started the first two games. Both had pitched themselves into the bullpen earlier in the season.

Velasquez was gifted with a quick 7-0 cushion. By the end of the third, the lead was gone and so was he. Nick Pivetta, who had also been sent to the bullpen, subsequently gave up five runs (one earned) in 2 1/3 innings. The next day he was optioned to Triple-A Lehigh Valley for the second time this season.

Eflin and ace Aaron Nola, who started the last two games, both pitched well. But even those performances come with an asterisk.

Eflin gave up two runs in six innings. That shows how good he can be. It also highlights how inconsistent he’s been. After 14 starts this year his ERA was 2.83. In his next 11 appearances, going into Saturday, it was 8.75.

The Phillies felt confident going into the finale with Nola on the mound. He pitched well enough to win. But the offense produced just four hits and, incredibly, not a single at bat with a runner in scoring position. Which is a useful reminder that the pitcher can control only so much. As good as Nola is, the Phillies have lost 10 times this year when he’s started.

Heck, in 1968, Bob Gibson had a 1.12 earned run average, one of the most dominant seasons a pitcher has ever had. And, amazingly, a Cardinals team that went to the World Series still managed to lose 10 of his starts.

The offense has been spotty enough all season to cost hitting coach John Mallee his job. The bullpen, which currently is missing eight pitchers who are on the injured list, has been up-and-down.

But if the Phillies players scatter for the winter on September 29 after playing the Marlins in the last game of the regular season at Citizens Bank Park, the 'Big Second Guess' will center on why the front office didn’t do more to strengthen the starting pitching last offseason.

Now, that conveniently ignores the fact owner John Middleton had already committed a half billion-with-a-b dollars to totally revamp the lineup by adding Andrew McCutchen, J.T. Realmuto, Jean Segura and, of course, Bryce Harper. Even for a team that admitted it might be willing to spend stupid money, that’s a lot.

It’s also revisionist history to suggest that, well, the Phillies should have known this was going to become a problem. Velasquez, Eflin and Pivetta had each given them reason to believe this might be the season they put it together. They all have the stuff to succeed at the big league level. And Jerad Eickhoff, reported to be healthy again, seemed like a solid insurance policy.

Pivetta’s struggles have been particularly disappointing. The Phillies tipped their hand by making him the No. 2 starter, ahead of Arrieta, out of the gate.

They didn’t say that at the time, of course. They said it had to do with match-ups and allowing Arrieta to make his first start of the season on the big stage of ESPN Sunday Night Baseball. My guess is that it was intended to demonstrate how much confidence the team had in his ability. Sort of the way Dodgers manager Tommy Lasorda boosted a quiet young righthander named Orel Hershiser by constantly referring him as Bulldog.

Hershiser went 19-3 with a 2.01 earned run average in 1985. Three years later, he won the Cy Young Award. Let’s just say that Pivetta, to this point, hasn’t reacted exactly the same way to his vote of confidence.

So here we are. This is a team that raised hopes by sweeping the Cubs at home and the Red Sox on the road, only to once again be ambushed once again by a Marlins team that’s been a punching bag for every other team in the division.

The next three games, beginning Monday night, are at home against the Pirates. Pittsburgh has the second-worst record in the league. Jason Vargas and Drew Smyly, acquired before the deadline to patch the rotation’s leaks, will start the first two games.

After that, the schedule turns unforgiving. Starting this weekend with a visit from the Mets, the Phillies have 29 games remaining. Seventeen are on the road. Only four are against a teams with a losing record until the Marlins come to Citizens Bank Park to end the season.

That would be a daunting assignment even under the best of circumstances. The degree of difficulty is raised by the starting pitching concerns that were laid bare over the weekend.

At least the Phillies won’t have to spend too much time trying to figure out what their priority is going into next season.