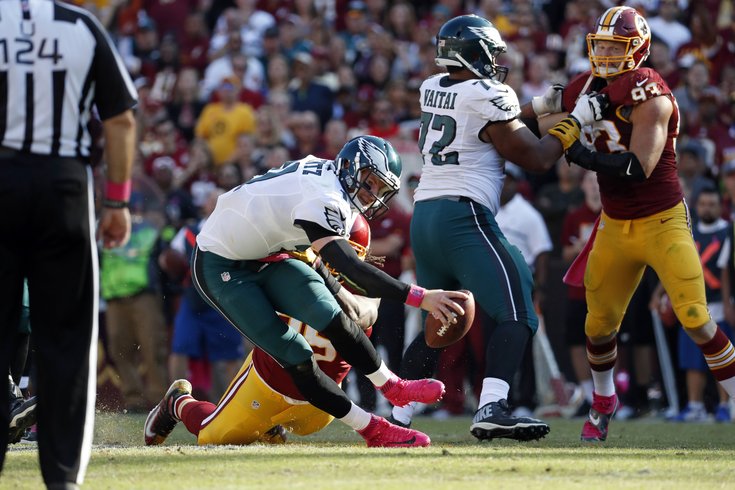 See, not every sack on Sunday was Big V's fault...

Things didn't get off to a great start for Philadelphia Eagles rookie tackle Halapoulivaati Vaitai, who made his NFL debut in place of suspended starter Lane Johnson. But with Johnson still sidelined for the next nine weeks after a second positive PED test, first year head coach Doug Pederson still believes the fifth-round pick out of TCU gives the Birds the best chance to win going forward.

That's why, despite his struggles against Ryan Kerrigan and the rest of the Washington Redskins defensive line, Big V is going to start again on Sunday when the Eagles return home to face the undefeated Minnesota Vikings, who, by the way, are second in the NFL in sacks (19) and first in sacks per game (3.8).

"You look at it from a certain perspective, and then you get a chance to come in and watch it again today, and you get a different perspective. I felt like he -- slow start, but really settled in nicely throughout the game. And listen, was it perfect, was it pretty? No. Were there assignment errors? Yes.

"But I'm not going to stand here and point the finger at Big V because that's not what happened. There's enough mistakes all around in this football game that cost us this game. But I thought as the game progressed, he settled in nicely and did some good things."

A big reason why Vaitai improved throughout the game is because of the help he was getting from right guard Brandon Brooks. But every time you slide another body over to help in one area, you're leaving another even more vulnerable. That's part* of the reason why Wentz was sacked five times and hit on 11 of his 22 pass attempts*.

*There were a few times where Wentz simply held on to the ball too long when he could have easily thrown it away.

Given the price they paid to acquire Wentz, his safety should be second only to winning (and, in some cases, it should probably be top priority).

"There's a risk every time they take the field. Plain and simple," Pederson said. "Every time we take the field, there's a risk, regardless of whether there's a rookie or a veteran out there playing. I can't get caught up in that. I'm not going to necessarily worry about that too much. My focus is to get V ready to go. And, listen, he'll be a lot better this week. He's now got a full game under his belt and that's valuable experience that he can learn from going forward."

Another question Pederson has to answer is why he feels that the rookie is a better option at tackle than Allen Barbre, the team's starting right guard. During camp, Pederson hinted at the idea of moving Barbre from left guard to right tackle and allowing veteran offseason acquisition Steven Wisniewski in Barbre's place.

Instead, the rookie head coach decided to opt for his rookie.

"Barbre, right now, he's been playing really well at left guard. It's a whole new position going from left guard to right tackle. You're out there on an island and it's just, making a double switch like that is tough, even though it is two veteran players, that's a tough switch. We did things in this football game to help, whether it be slide protections or chips or whatever we needed to do to help [Vaitai] and we'll continue to monitor that as we go, as we put gameplans together in these next couple of weeks."

Eventually, Jason Peters is going to retire. And when that happens, Lane Johnson is expected to move into his spot on the left side, creating a vacancy at right tackle. Big V is clearly the top candidate to fill that void, but the team would probably like to know for sure whether or not the 23-year-old can start in this league.

So is this a case of Pederson and the front office seeing what they have in the rookie (and beginning to develop him in to their starting tackle of the future)? Or, is this simply what the coaches see as the best current option to protect their quarterback and ultimately win football games?

"[Vaitai] gives us the best opportunity to win right now," Pederson added. "And he is our backup right tackle right now. Therefore, he's going to play and he's going to gain valuable experience week in and week out."

But Vaitai wasn't the only lineman who struggled against the Redskins on Sunday, something Pederson was quick to point out when asked about the rest of the unit's difficulty protecting their rookie quarterback.

"How much time do we have?"