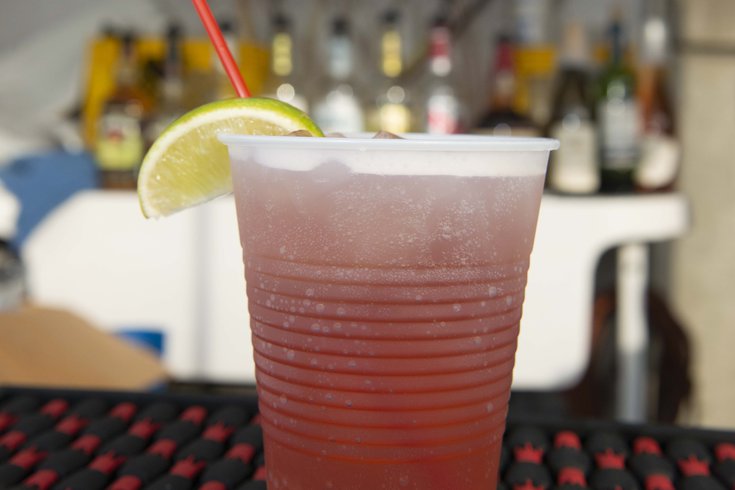 The sale of to-go cocktails, like the one shown in the file photo above, was approved in Pennsylvania last May as part of an effort to help out bars, restaurants and hotels with liquor licenses that were struggling at the height of the COVID-19 pandemic.

A bill that would legalize takeout mixed drinks in Pennsylvania took another step forward Wednesday, but don't get your hopes up that cocktails-to-go will be back soon.

Legislation that would permanently allow for restaurants, bars and hotels to serve alcoholic beverages for takeout passed the Pennsylvania Senate. But an 11th-hour amendment added to the bill by Senate Republicans in committee on Tuesday pushed Senate Democrats and Gov. Tom Wolf to withdraw their support for the measure.

The sale of cocktails-to-go was approved in Pennsylvania last May as part of an effort to help out bars, restaurants and hotels with liquor licenses that were struggling at the height of the COVID-19 pandemic.

Any establishment that had experienced a 25% decline in average monthly sales during the public health crisis could sell takeout mixed drinks. Beverages had to be sold before 11 p.m. in containers with a secure lid. Drink quantities had to fall between 4-64 ounces.

The measure would expire whenever Pennsylvania's COVID-19 disaster emergency was lifted. It was the first time that the state had permitted cocktails-to-go.

A bill to make the practice permanent in Pennsylvania was introduced in the General Assembly in April. The measure passed the House with overwhelmingly bipartisan support in May and was sent to the Senate for consideration.

But the future of cocktails-to-go in Pennsylvania became uncertain after voters backed a GOP-led ballot measure to restrict Wolf's emergency powers in last month's primary election. Both houses of the Republican-controlled General Assembly then quickly voted on a measure to end the governor's COVID-19 disaster declaration.

The certification of Pennsylvania's primary election results officially brought the sale of cocktails-to-go and expanded outdoor dining service to a close Tuesday after the PLCB informed licensees that the pandemic practice had to end effective immediately.

The PLCB confirming they are notifying licensees that to go cocktails and outdoor seating must end now that election results are certified and @GovernorTomWolf ‘s disaster declaration has expired. pic.twitter.com/H5SeYU5pW3

Meanwhile, legislation to reimplement cocktails-to-go and expanded outdoor service appeared on its way to passage in the Senate when Republicans on the Law and Justice Committee added an amendment on Tuesday that would allow grocery stores, beer distributors, convenience stores and bars to sell pre-canned alcoholic beverages.

The amendment would also allow businesses with liquor licenses to sell up to 192 ounces of ready-to-drink products for off-premise consumption while implementing no limits on distributors selling these drinks, according to PennLive.com.

These types of drinks are only available currently in Pennsylvania through the Fine Wine and Good Spirits stores that are operated by the state.

The amended bill was approved narrowly in committee on Tuesday and sent back to the full Senate chamber for a third consideration. The Law and Justice Committee is the starting point for all liquor bills in the Senate.

Wolf said Tuesday he would sign the bill in its original form and called on the Senate to pass the legislation cleanly without any amendments.

Cocktails-to-go were a lifeline to bars and restaurants during the pandemic.

Pennsylvanians have embraced this service as an amenity in our commonwealth, and I support making it permanent. https://t.co/0Co4ZFnpxv

The bill was referred Wednesday to the Senate Appropriations Committee, where it was approved along party lines and re-reported back to the full chamber for a final vote.

During a lengthy debate over the bill on Wednesday, Democrats signaled their opposition to the amendment. Democratic legislators argued that it would lead towards the privatization of wine and spirits in Pennsylvania and weaken the PLCB's ability to fund the state's budget.

Republican senators expressed their support for the amended legislation, citing the tax revenue benefits that it would bring to the state.

After narrowly passing the Senate, largely along party lines, the amended bill will head to the GOP-controlled House for a final vote before going to Wolf's desk, where a veto is expected. It is unknown when the House will take up the amended measure.

The bill would need support from two-thirds of both legislative bodies to override a veto. However, an override appears unlikely after the measure passed by a two-vote margin in the Senate.