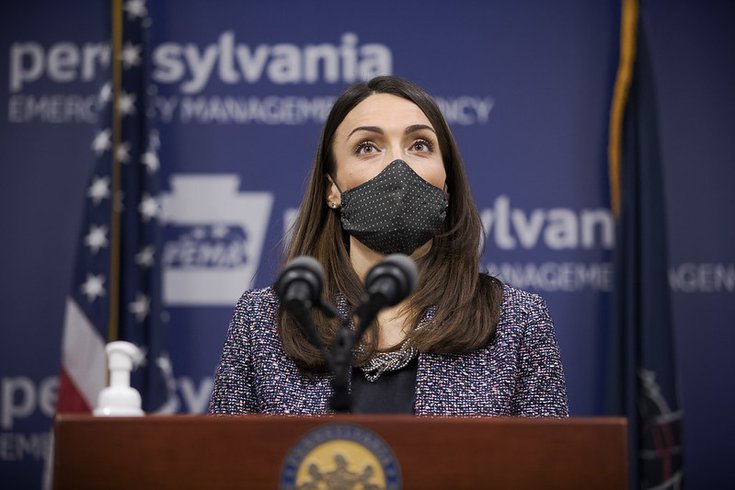 Alison Beam was named Pennsylvania's acting secretary of health in January after Dr. Rachel Levine was appointed to serve in the Biden administration.

Alison Beam is stepping down as Pennsylvania's acting health secretary, a role she described as "the most humbling honor" of her career.

Beam took the position in January after Dr. Rachel Levine was nominated to join the U.S. Department of Health and Human Services. Over the past year, she has overseen Pennsylvania's COVID-19 response, including its vaccine rollout.

Beam is departing the Wolf administration to spend more time with her family, according to multiple media reports. She will leave her post at the end of the year.

"Under the governor's leadership, the administration has made critical strides in ensuring access to health care for all Pennsylvanians and in turn created a healthier, more equitable commonwealth for generations to come," Beam said. "I could not be prouder to have worked alongside such devoted public servants during my tenure with the Wolf administration.”

Under Beam, Pennsylvania has administered over 19 million COVID-19 vaccine doses, the fifth-most of any state, according to the U.S. Centers for Disease Control. About 60% of the state's eligible population is fully vaccinated and 84% of eligible residents have received at least one dose.

But the COVID-19 response has not been exempt from hiccups. In February, thousands of Moderna doses that were to be used as second shots were mistakenly used as first doses. It forced thousands of residents to reschedule or delay their vaccine appointments.

Beam's resignation comes just days after the Pennsylvania Supreme Court struck down the state's COVID-19 mask requirement in K-12 schools and child care centers. The court agreed with a previous Commonwealth Court ruling saying Beam had no legal authority to enact the mandate.

Keara Klinepeter, the Department of Health's executive deputy secretary, will take over for Beam in January. Klinepeter previously served as senior adviser to the secretary of health, a role in which she was responsible for helping develop COVID-19 guidance for health care facilities and providers.

"I look forward to continuing to work closely with the tremendous employees at the Department of Health and ensuring public health remains a top priority throughout the commonwealth," Klinepeter said. "I am honored for the opportunity to lead public health efforts during this critical time and to serve my fellow Pennsylvanians."

Before taking over the state health department, Beam had served as deputy chief of staff to Gov. Tom Wolf.

"I am proud to have worked with acting Secretary Beam over the past several years, and the commonwealth has been fortunate to have had the benefit of her leadership during the COVID-19 pandemic – especially as the Department of Health oversaw a massive vaccine rollout over the course of the past year," Wolf said.