Pennsylvania’s infrastructure gets a C- grade, just like it did four years ago 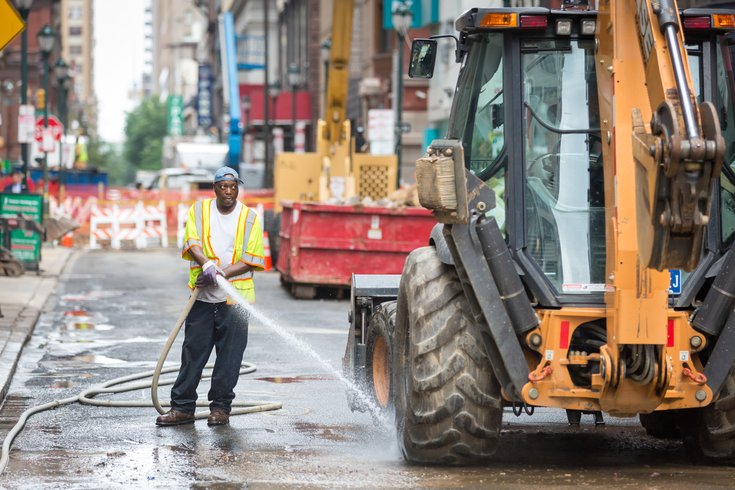 A worker from the Philadelphia Water Department works on Sansom Street in Center City following a huge water main break.

Pennsylvania received a C- grade for its infrastructure from the American Society of Civil Engineers on Wednesday, the same grade it received in 2014.

Of the 18 individual grades the report hands out for specific categories, only three — hazardous waste, parks and recreation, and freight rail — received grades of B- or better. Not one of the 18 categories received an A.

Since a C- is still technically a passing grade (although some parents out there might disagree), there were a few positives from the report card.

The construction of two new levee systems as a result of increased funding bumped the state’s levees grade up to a C; advancement of more than 2,500 transportation projects saw the Pennsylvania's roads grade jump (kind of) to a D+ grade; and the replacement of more than 550 bridges in poor condition showed “great effort” towards addressing the state’s numerous bridges in disrepair.

But then we have the bad news, including 11 of the 18 categories where Pennsylvania remained stagnant during the past four years.

The report said Pennsylvania has earned the ignominious title of “the state with the most combined sewer overflows." The state also saw a surprisingly high, 40-percent increase in water main breaks, and severe deterioration of inland waterways.

The state's overall grade of C-, the report said, indicates that "Pennsylvania has some of the oldest infrastructure in the country, and improvements continue to be needed.”

Perhaps the next Infrastructure Week can help the Keystone State start to raise the bar.