In week leading up to Super Bowl 50 matchup between Panthers and Broncos, a pair of fans show appreciation for superstar quarterback 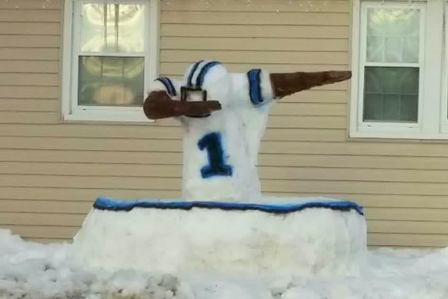 As we prepare to enter the full spectrum coverage of Media Week surrounding Super Bowl 50, much has been made of the celebratory antics of Panthers quarterback Cam Newton, who led his team to a 15-1 regular season record and appears to be the consensus pick for league MVP.

When asked last week about mounting criticism of his on-field persona, Newton talked about race as a possible factor in his public perception, but also added that his true fans have his back.

"I’m an African-American quarterback that may scare a lot of people because they haven’t seen nothing that they can compare me to,” Newton said. "Whether you win, lose or draw, people are going to talk. Now the true fans – they know what’s up. They’re going to be supportive whatever happens. But people are going to judge and have their own opinion."

Newton can count on at least two big fans in Enola, Pennsylvania, who recently sculpted a Cam Newton snowman performing the signature "dab" that has taken the nation by storm. Even former Eagles coach Andy Reid got in on the act a few weeks ago. (Note: The tweet below says this took place in Harrisburg, but Twitter users have pointed out that Enola residents Harrison and Dylan Laman were behind "Snow Cam").

Not even 3 feet of snow can stop the dab. 2 kids in Harrisburg, PA built Cam Newton snowman @Panthers @CameronNewton pic.twitter.com/uGgecsvzJR

Twitter users applauded the creativity behind the snowman, which may turn out to be a good omen for the Panthers when they face Peyton Manning and the Broncos next Sunday.

Newton, who has been active in the Charlotte community through his Cam Newton Foundation, recently welcomed his son into the world with his longtime girlfriend.

The Carolina Panthers and Denver Broncos will kick off Super Bowl 50 in San Francisco next Sunday at 6:30 p.m.