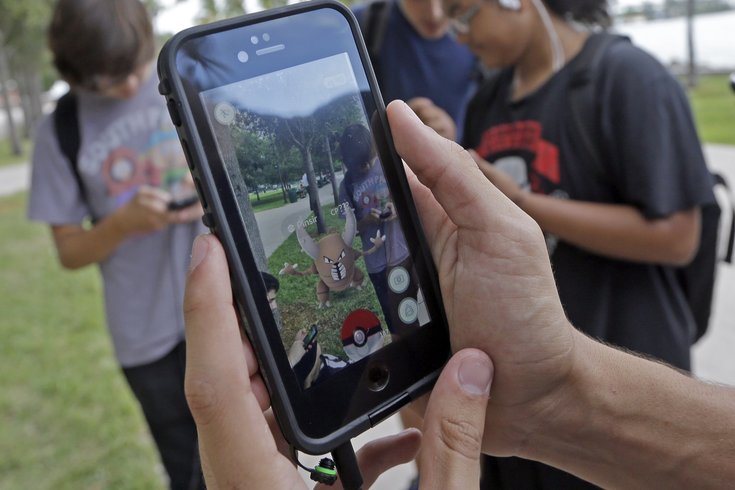 Pinsir, a Pokemon, is found by a group of "Pokemon Go" players, Tuesday, July 12, 2016, at Bayfront Park in downtown Miami.

All right, let out that collective groan everybody: Here's another story about how "Pokemon Go" is taking over the world.

The augmented reality smartphone game has become so popular that The Associated Press has issued official guidelines for how to properly write the name of it:

Unsurprisingly, people are beginning to find ways to make money off the game. For example, an entrepreneur from our neighbors in the western part of the state has launched an Uber-style service for players.

T.J. Harris, of Pittsburgh, told ABC News his new service has been fully booked for two straight days at a rate of $25 an hour. Harris and his team drive "Pokemon Go" players to spots that are good for the game. Per ABC:

"We take people to popular Pokestops in our area that we know have had the harder-to-find Pokemon. We can also take you to [Pokemon] gyms, you can drop your Pokemon off and they can level off."

Harris said the service started with his friend Tom Larkin, an Uber driver, who put up a Facebook post offering to give people rides to go catch Pokemon. He told ABC that there is a rigorous screening process for potential drivers, at least in terms of their "Pokemon Go" abilities: They have to be at least a level 10.

The service was originally called Pogogh, short for "Pokemon Go," with the pgh as shorthand for Pittsburgh. But as of Wednesday morning, the business name had changed to "GoGetters" out of what appears to be an attempt to avoid a lawsuit. Per the company's Facebook page:

Out of respect to Nintendo, Niantic, and everyone who brought Pokemon Go to us, we have amicably decided to change our name to GoGetters. Still the exact same business, just a different name. Please check out our new page, and happy hunting!

Currently, GoGetters makes no explicit mention of the game on its page. You can steal the idea and bring it to Philly learn more about GoGetters here and here.