Phil Martelli's love of Bruce Springsteen goes beyond the music 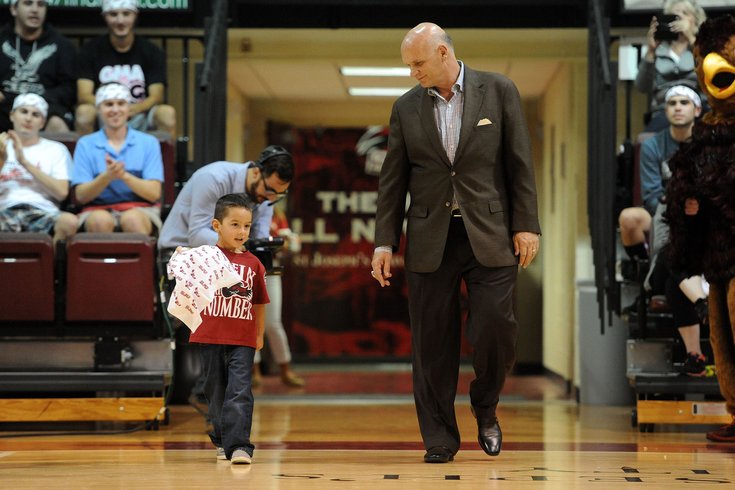 Phil Martelli takes to the Hagan Arena court with his grandson, Philip Stephen.

Phil Martelli was a freshman at Widener University when he was told about an upcoming concert at the field house. The year was 1973. His friends knew about the legendary bar band. But Martelli, 19, had never heard of Bruce Springsteen.

"There were 100, maybe 200 people," Martelli said, sitting in a chair in the conference room in the Saint Joseph’s University basketball office, where he's been the head coach since 1995. “The work that this guy put into it, it mesmerized me.

"Now, you have to understand -- I’d never bought an album; I’d never bought a record; I never owned a stereo; I didn’t have a record player or an 8-track. None of that. I really didn’t have an interest in music. People would say, ‘The English Invasion.’ I’d be, ‘Yeah, so?' I was the oldest of seven kids. I don’t remember watching the Ed Sullivan show or what was happening on American Bandstand. Music wasn’t really my thing."

Young Phil was into sports growing up in Landsdowne, especially basketball. And by his freshman year at St. Joseph’s Prep, Martelli knew he wanted to be a basketball coach. He didn’t get a driver’s license until he was almost 21 -- “I hitch-hiked everywhere," he said -- so he didn’t have AM or FM radio tunes in his head every day.

He did attend a concert in high school when Rod Stewart appeared at the old Spectrum, but he was far from impressed.

“There’s something about the way [Springsteen] ticks, that I know, even by osmosis, I could pull away and I could be better at what I do."

"But when I saw [Springsteen], I just remember the amount of work he put in. I would read about him, but I wasn’t ready to make the pilgrimage to Asbury Park."

He would see Springsteen in concert again, including in New York, Pittsburgh and a few times in Philadelphia. In one show at the Linc, Martelli and some friends had a view of the side stage. He can still see the Boss walking off after a three-and-a-half-hour show.

"He was completely spent," the long-time coach said. "I wasn’t that close to him but I could see in his body language that he’d given everything he had, and that’s the thing I saw again in his other shows. Even listening to him on [Sirius] radio. Every song is a story and he gives maximum effort. He drives himself to exhaustion. He’s just driven by that passion and that belief."

They have never met -- “I know in my bones I’m going to meet him" -- and doing so tops Martelli’s bucket list, right there with taking the Hawks to the Final Four. 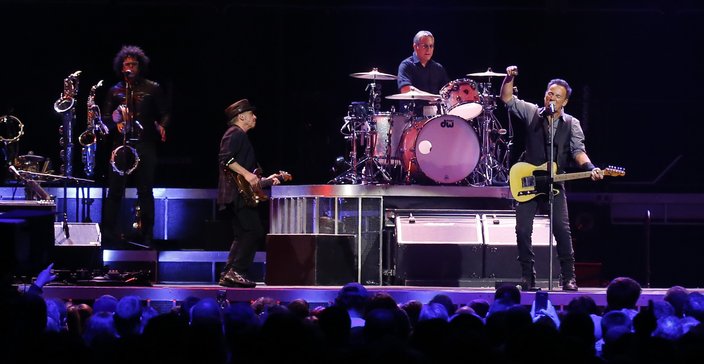 Bruce Springsteen, right, performs with the East Street Band in the first stop of his River Tour 16 concert earlier this month.

Martelli has all Springsteen’s albums now -- and several books written about him.

His favorite, however, has rarely encountered the eject button in the last 21 years. That’s how long Martelli has played the same five tunes over and over -- but only on the 15-minute drive to Hagan Arena for home games and to other games in Philly.

The name of those five songs? Or the album, for that matter?

“I don’t know," he said incredulously, not even remembering who gave it to him. “On game days I’m blanked out, my brain is racing. I don’t sing the words. It’s almost comical. I get in the car, turn off the radio, turn off the phone and listen on the drive here. I actually know where I am on City Line based on what song is on.

“Some people say it’s superstition. It’s not. It’s my routine."

A routine that was born out of necessity.

"It all started because I didn’t know how to change the CD in my car," he said with a laugh. "I’ve never told anybody that."

On drives home he listens to the radio. Sometimes news channels, but mostly Sirius stations that play music from the 60’s. Or love songs. Or a channel called Soul Town. Or sometimes even Broadway tunes.

And, of course, Springsteen.

Among his favorite tracks are "Outlaw Pete," "Waiting on a Sunny Day" and "Born to Run." He also loves "Land of Hopes and Dreams," of which Martelli said, “I think he is speaking to all of us."

"He is the epitome to me, up there on the mountain top, and I think he would go just as hard and give just as much of himself had he never left the bar scene," he continued. "I don’t think it’s the fact that he’s a world-wide phenomenon or mega-super star. I think that’s who he is."

So what if Martelli does meet Springsteen? What would he say? The 61-year-old pauses 10 seconds.

“I’m just a Philadelphia neighborhood guy who’s had this chance. But at the end of the day, I just wanna be a good guy."

“I’d probably ask him about his passion," he finally said. "Like, ‘Tonight is Philadelphia, in two days it’s Madison Square Garden, and four days later it’s Akron. Where’s the consistency come from, where does the passion come from?'

"And then I would probably ask him about his day, when, you know, you’re gonna turn it on for three hours in front of 30 or 50,000 people? I wonder if that would relate to my day. Like I know on game day I’ll get a reasonable amount of sleep the night before, then when I get up it starts churning and it goes all day until that first ball goes in the air. I don’t think he could give everything he does and say, at noon, ‘I’m having lunch.’ There’s a tempo to his day. It’s not stale.

And like Martelli, after the adrenaline of a game, chances are he doesn’t get to sleep until the next day.

So who is this guy who so admires the rock star? Thirty-five seconds pass as he taps his left fingers on the long oval desk.

The room goes silent again, this time for 23 seconds.

“Without ego. I want to think that I’m just a good guy. That’s all. I don’t need for someone to tell me I’m a great coach, or a lousy coach. But I want those who come in contact with me to know that I care. I’m fortunate that I can make my family comfortable, and to have some impact -- whether it’s charitable endeavors or the school kid who wants to be the college coach.

“I’m just a Philadelphia neighborhood guy who’s had this chance. But at the end of the day, I just wanna be a good guy."

Humming the E Street Shuffle along the way.