At a covert meeting at a Wegmans cafe, group gathers to talk about ending life before health declines 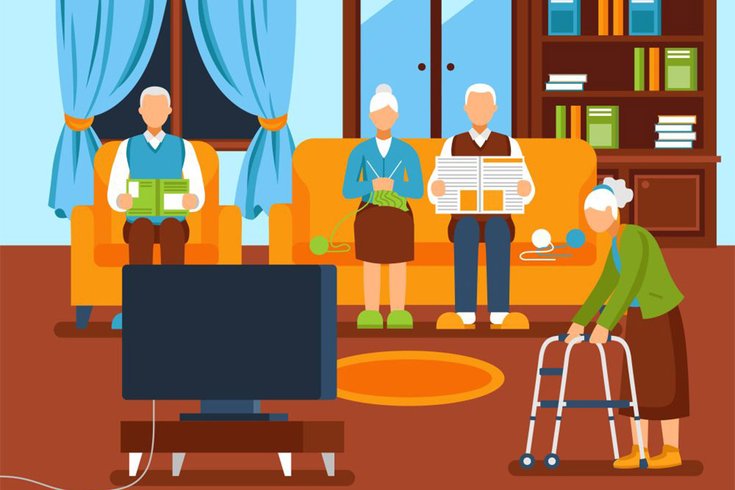 Ten residents slipped away from their retirement community one Sunday afternoon for a covert meeting in a grocery store cafe. They aimed to answer a taboo question: When they feel they have lived long enough, how can they carry out their own swift and peaceful death?

The seniors, who live in independent apartments at a high-end senior community near Philadelphia, showed no obvious signs of depression. They’re in their 70s and 80s and say they don’t intend to end their lives soon. But they say they want the option to take “preemptive action” before their health declines in their later years, particularly due to dementia.

More seniors are weighing the possibility of suicide, experts say, as the baby boomer generation — known for valuing autonomy and self-determination — reaches older age at a time when modern medicine can keep human bodies alive far longer than ever before.

MORE HEALTH: These are the jobs with the highest suicide rates

The group gathered a few months ago to meet with Dena Davis, a bioethics professor at Lehigh University who defends “rational suicide” — the idea that suicide can be a well-reasoned decision, not a result of emotional or psychological problems. Davis, 72, has been vocal about her desire to end her life rather than experience a slow decline due to dementia, as her mother did.

The concept of rational suicide is highly controversial; it runs counter to many societal norms, religious and moral convictions and the efforts of suicide prevention workers who contend that every life is worth saving.

“The concern that I have at a social level is if we all agree that killing yourself is an acceptable, appropriate way to go, then there becomes a social norm around that, and it becomes easier to do, more common,” said Dr. Yeates Conwell, a psychiatrist specializing in geriatrics at the University of Rochester and a leading expert in elderly suicide. That’s particularly dangerous with older adults because of widespread ageist attitudes, he said.

As a society, we have a responsibility to care for people as they age, Conwell argued. Promoting rational suicide “creates the risk of a sense of obligation for older people to use that method rather than advocate for better care that addresses their concerns in other ways.”

AT PHILLY-AREA WEGMANS, A COVERT MEETING

A Kaiser Health News investigation in April found that older Americans — a few hundred per year, at least — are killing themselves while living in or transitioning to long-term care. Many cases KHN reviewed involved depression or mental illness. What’s not clear is how many of these suicides involve clear-minded people exercising what Davis would call a rational choice.

Suicide prevention experts contend that while it’s normal to think about death as we age, suicidal ideation is a sign that people need help. They argue that all suicides should be avoided by addressing mental health and helping seniors live a rich and fulfilling life.

But to Lois, the 86-year-old woman who organized the meeting outside Philadelphia, suicides by older Americans are not all tragedies. Lois, a widow with no children, said she would rather end her own life than deteriorate slowly over seven years, as her mother did after she broke a hip at age 90. (Lois asked to be referred to by only her middle name so she would not be identified, given the sensitive topic.) In her eight years at her retirement community, Lois has encountered other residents who feel similarly about suicide. But because of stigma, she said, the conversations are usually kept quiet.

“We are sabotaging that. We are saying, thank you very much, but that’s not what we’re looking for.” – Lois, 86, meeting organizer, on a life spent aging in a retirement.nursing home

Lois insisted her group meet off-campus at Wegmans because of the “subversive” nature of the discussion. Supporting rational suicide, she said, clashes with the ethos of their continuing care retirement community, where seniors transition from independent apartments to assisted living to a nursing home as they age.

Seniors pay six figures to move into the bucolic campus, which includes an indoor heated pool, a concert hall and many acres of wooded trails. They are guaranteed housing, medical care, companionship and comfort for the rest of their lives.

“We are sabotaging that,” Lois said of her group. “We are saying, thank you very much, but that’s not what we’re looking for.”

Carolyn, a 72-year-old member of the group who asked that her last name be withheld, said they live in a “fabulous place” where residents enjoy “a lot of agency.” But she and her 88-year-old husband also want the freedom to determine how they die.

A retired nurse, Carolyn said her views have been shaped in part by her experience in the HIV/AIDS epidemic. In the 1990s, she created a program that sent hospice volunteers to work with people dying of AIDS, which at the time was a death sentence.

She said many of the men kept a stockpile of lethal drugs on a dresser or bedside table. They would tell her, “When I’m ready, that’s what I’m going to do.” But as their condition grew worse, she said, they became too confused to follow through.

“I just saw so many people who were planning to have that quiet, peaceful ending when it came, and it just never came. The pills just got scattered. They lost the moment” when they had the wherewithal to end their own lives, she said.

A PEACEFUL END – IN HAND

Carolyn emphasized that she and her husband do not feel suicidal, nor do they have a specific plan to die on a certain date. But she said that while she still has the ability, she wants to procure a lethal medication that would offer the option for a peaceful end in the future.

“Ideally, I would have in hand the pill, or the liquid or the injection,” she said. She said she’s embarrassed that, as a former nurse, she doesn’t know which medication to use or how to get it.

Maine recently became the ninth state to allow medical aid in dying, which permits some patients to get a doctor’s prescription for lethal drugs. That method is restricted, however, to people with a terminal condition who are mentally competent and expected to die within six months.

Patients who aren’t eligible for those laws would have to go to an “underground practice” to get lethal medication, said Dr. Timothy Quill, a palliative care physician at the University of Rochester School of Medicine. Quill became famous in the 1990s for publicly admitting that he gave a 45-year-old patient with leukemia sleeping pills so she could end her life. He said he has done so with only one other patient.

“The most wonderful thing about it was being around a table with people that I knew where we could talk about it, and realize that we’re not alone. To share our fears — like if we choose to use something, and it doesn’t quite do the job, and you’re comatose or impaired.” – Carolyn, 72, resident of assisted living facility outside Philadelphia

Quill said he considers suicide one option he may choose as he ages. “I would probably be a classic [case] — I’m used to being in charge of my life.” He said he might be able to adapt to a situation in which he became entirely dependent on the care of others, “but I’d like to be able to make that be a choice as opposed to a necessity.”

Suicide could be as rational a choice as a patient’s decision to end dialysis, after which the patient typically dies within two weeks, he said. But when patients bring up suicide, he said, it should launch a serious conversation about what would make their life feel meaningful and their preferences for medical care at the end of life.

Clinicians have little training on how to handle conversations about rational suicide, said Dr. Meera Balasubramaniam, a geriatric psychiatrist at the New York University School of Medicine who has written about the topic. She said her views are “evolving” on whether suicide by older adults who are not terminally ill can be a rational choice.

“One school of thought is that even mentioning the idea that this could be rational is an ageist concept,” she said. “It’s an important point to consider. But ignoring it and not talking about it also does not do our patients a favor, who are already talking about this or discussing this among themselves.”

In her discussions with patients, she said, she explores their fears about aging and dying and tries to offer hope and affirm the value of their lives.

These conversations matter because “the balance between the wish to die and the wish to live is a dynamic one that shifts frequently, moment to moment, week to week,” said Conwell, the suicide prevention expert.

Carolyn, who has three children and four grandchildren, said conversations about suicide are often kept quiet for fear that involving a family member would implicate them in a crime. The seniors also don’t want to get their retirement community in trouble.

'WE ONLY GET ONE CRACK AT IT'

In some of the cases KHN reviewed, nursing homes have faced federal fines of up to tens of thousands of dollars for failing to prevent suicides on-site.

There’s “also just this hush-hush atmosphere of our culture,” said Carolyn. “Not wanting to deal with judgment — of others, or offend someone because they have different beliefs. It makes it hard to have open conversations.”

Carolyn said when she and her neighbors met at the cafe, she felt comforted by breaking the taboo.

“The most wonderful thing about it was being around a table with people that I knew where we could talk about it, and realize that we’re not alone,” Carolyn said. “To share our fears — like if we choose to use something, and it doesn’t quite do the job, and you’re comatose or impaired.”

People who attempt suicide and survive may end up in a psychiatric hospital “with people watching you all the time — the complete opposite of what you’re trying to achieve,” Quill noted.

At the meeting, many questions were practical, Lois said.

“We only get one crack at it,” Lois said. “Everyone wants to know what to do.”

Davis said she did not have practical answers. Her expertise lies in ethics, not the means.

Public opinion research has shown shifting opinions among doctors and the general public about hastening death. Nationally, 72% of Americans believe doctors should be allowed by law to end a terminally ill patient’s life if the patient and his or her family request it, according to a 2018 Gallup poll.

Lois said she’s seeing societal attitudes begin to shift about rational suicide, which she sees as the outgrowth of a movement toward patient autonomy. Davis said she’d like to see polling on how many people share that opinion nationwide.

“It seems to me that there must be an awful lot of people in America who think the way I do,” Davis said. “Our beliefs are not respected. Nobody says, ‘OK, how do we respect and facilitate the beliefs of somebody who wants to commit suicide rather than having dementia?’”