Who gets the COVID-19 vaccine first in Philly? Eligibility based on three key factors

After health care workers, city school teachers and transportation workers will be next to get their shots 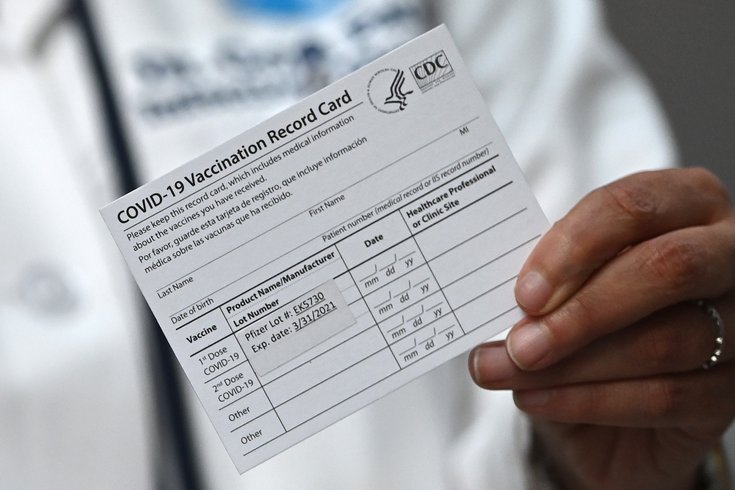 Philadelphia's COVID-19 vaccines are being administered based on three factors: risk of exposure to the coronavirus, the likelihood of developing severe COVID-19 and the risk of transmitting the virus to people who could have severe illnesses. Above, a medical professional displays a proof of vaccine card in New York.

Now that Philadelphia is receiving its first COVID-19 vaccines, many residents want to know when they'll be eligible to get their shots.

Specific time frames remain nebulous, though city officials expect the rollout to be a months-long process. But the order of immunizations is more defined.

City health officials also factored in the recommendations of the U.S. Centers for Disease Control and Prevention. The order in which residents will become eligible for the vaccine is listed below.

Even that order leaves a lot of questions that must be answered in the weeks ahead.

For instance, where do teachers fall among the critical infrastructure workers? They are likely to be exposed to the coronavirus at work, but less likely to pass it to people who will develop severe COVID-19.

"We're going to start vaccinating with those first two groups and then we will refine that list in the future based on more detailed recommendations," Health Commissioner Dr. Thomas Farley said on Tuesday.

Another major factor to consider: a person's race.

Farley stressed that the advisory groups drafting recommendations are "fully aware" that people of color have suffered a disproportionate amount of coronavirus infections, and there will be equitable access to the vaccine. People of color are more likely to hold jobs with increased exposure to COVID-19 and more prone to underlying medical conditions, a result of systemic injustices.

"As the groups have been prioritized, you're going to find that the racial groups that are more heavily hit are going to be more likely to get the vaccine by the nature of their occupation," Farley said, noting the city's hospital staffers and nursing home employees are more likely to be Black.

For now, the city is working to get front-line health care workers immunized. Farley said there's no established timeline for moving from one priority group to the next, but the process could speed up if the U.S. Food and Drug Administration authorizes additional COVID-19 vaccines.

The city has received 13,650 doses of Pfizer's COVID-19 vaccine. More are expected next week, though Farley did not know how many.

If the FDA authorizes Moderna's COVID-19 vaccine later this week, as expected, the city will receive 27,600 doses of its vaccine next week. Many of the Moderna vaccines will be given to nursing homes because they do not need to be stored at ultra-cold temperatures, unlike Pfizer's vaccine.

"We think we can distribute the vaccine as quickly as the manufacturers can produce it and ship it to us," Farley said. "It won't take long for this first batch of vaccines to be given to people in the city. But there are many, many – tens of thousands – of health care workers in this city. Many more than we have vaccines for right now."

The first vaccinations will be administered at hospitals and nursing homes. But as the rollout advances through the priority groups, a more expansive effort will become necessary.

"We ultimately will need many different organizations and sites to offer vaccines," Farley said. "The Black Doctors Consortium may be one of many community groups that will be setting up sites for vaccination. Employers will be doing it. Pharmacies will be doing. Ultimately, doctors offices will be offering this."

Additionally, the city eventually will launch a paid advertising campaign to encourage people to get vaccinated. But that won't occur until the demand does not dwarf the supply.

The COVID-19 restrictions implemented by Philadelphia prior to Thanksgiving appear to have prevented a slew of new infections.

The difference? Philadelphia had prohibited indoor dining and enacted several other tight restrictions. The state did not.

"It's evidence that we've limited that increase due to our restrictions," Farley said. "We know those restrictions are very hard for some businesses here in Philadelphia, but they clearly are important."

The city averaged 784 cases per day from Dec. 6 through Dec. 12, though Farley expects that number to increase due to delayed reporting. The test positivity rate was 10.8%.

Those numbers marked an improvement from the prior week, when the Philadelphia averaged 1,028 daily positive coronavirus test – its highest total of the pandemic – and recorded a 13% positivity rating.

The city reported 1,223 new cases confirmed through PCR tests Tuesday, bringing its total to 81,708 since the pandemic began. There also were another 111 probable positives detected by rapid antigen tests.