I auditioned to be an Eagles cheerleader – and failed miserably

In over my head, I put up a good front, dressed in a hot pink sports bra and black spandex shorts, and caked in enough makeup to be laid out at a wake 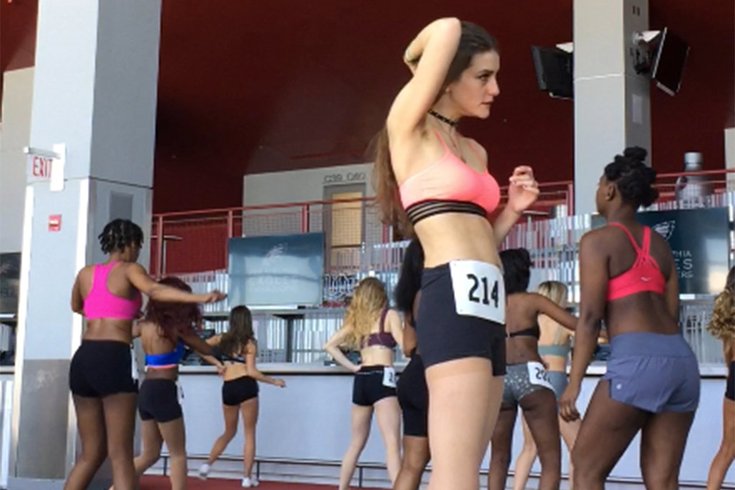 Jenny Holt of Philadelphia (No. 214) went to the Eagles cheerleading tryouts on Saturday with one mission: not to become a cheerleader, but to understand the allure of being one.

I made a pilgrimage to Lincoln Financial Field on Saturday in an ill-fated attempt to become an Eagles cheerleader.

By no means an athlete, I've been straight-up diagnosed with exercise asthma, which to me sounds like a fancy name for laziness. But either way, I can't run a block to save my life, nor would I deem it worth the effort.

Yet despite my apathy toward fitness, I love sports. I’m a Philly girl, born and raised, and my city's unparalleled devotion to its teams, our teams, lights a fire in me like nothing else. So, when I heard that the cheerleader tryouts begin with an open call, I knew I had to go, and since it was closed to the public, my only option was to experience it firsthand.

I didn’t actually want to be a cheerleader, just understand the allure of being one. NFL cheerleaders are notoriously underpaid, and their celebrity is nominal compared to that of the players, so I was curious to know: Who (else) goes to these things, what are they hoping to get out of it, and what would we be put through in an audition?

Given this past Eagles season, I expected the open audition to be rife with other nosy fans, each wanting to get closer to their Super Bowl champion team in some small way (I was most excited by the prospect of standing on the field), but it quickly became clear that I was the only jabroni there just for the sake of it. (Imagine my disappointment upon learning we wouldn’t be on the field at all, but cooped up in one of the corporate lounge areas.)

The open audition is the first step in a three-stage process spanning several weeks, each more pageant-y than the last, culminating with public speaking and swimwear modeling. Everyone is taught the same short dance routine, given time to practice, then judged based on a combination of skill, accuracy, enthusiasm and looks.

There are two optional workshops in the weeks leading up to the open audition, where for $80, you’re taught the choreography in advance and get tips on what to wear and how to present yourself in order to really stand out: remove jewelry and body piercings, cover tattoos, and make sure your boobs threaten to burst forth from their over-padded, rhinestone accentuated sports bras at all times. For anyone serious about making the cut, this seems to be the way to go. Needless to say, I did not attend the workshops.

The rest of the 200-plus hopeful, would-be cheerleaders milling about the practice space meant business. They were strong and toned and carried themselves with the confidence and poise of lifelong dancers and gymnasts, because most of them were. It would seem about a third of them had taken the workshops, and stood off to the sides, revising minor aspects of the routine they had already committed to muscle memory.

I knew I was in over my head but put up a good front, dressed in a hot pink sports bra (sans rhinestones) and black spandex shorts, and caked in enough makeup to be laid out at a wake, complete with fake, fluttery lashes glued to my eyelids. All that aesthetic effort fell by the wayside, however, when it came time to learn the routine. 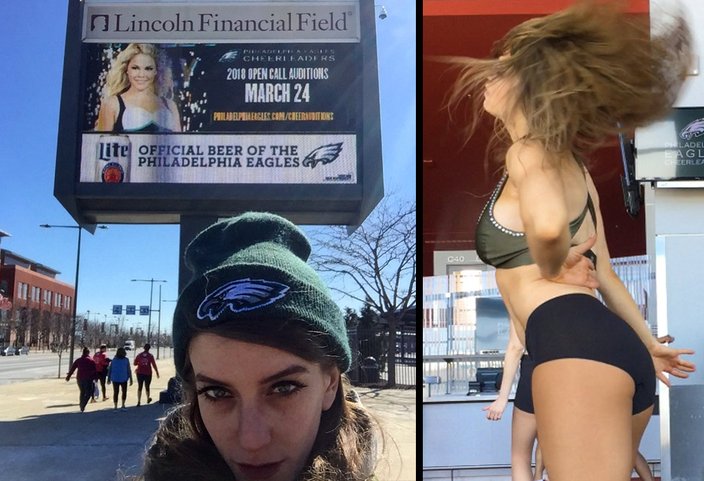 A Philly girl born and raised, Jenny Holt, left, says the city's unparalleled devotion to its sports teams lights a fire in her like nothing else. She took this selfie on her way into cheerleader tryouts at Lincoln Financial Stadium. At right, a fellow competitor tries out a few moves at the open audition.

The choreographer was a no-nonsense Kris Jenner-type who came bustling into the practice area and began running through the dance step-by-step at what felt like rapid-fire speed. She then very casually mentioned that when we performed it to the designated song (Bruno Mars’ “Finesse – Remix,” featuring Cardi B), everything would need to be done four times as fast.

I gasped, but everyone else appeared un-phased. She left for the other room, where over the course of the day we would be brought in – groups of six at a time – to strut our stuff before the panel and be judged by team executives, talent scouts, the choreographer and God alike.

On her way out, she reminded us to use our whole bodies while we danced, not forgetting such assets as our eyes, smiles, and of course, “hair-ography,” the willful, skillful whipping of one’s hair, back and forth. Scanning the room, I was awestruck by all the loose, flowing waves and perfectly layered coifs. Manes flipped with an effortless toss of the head, magically cascading back down and perfectly into place each time.

They were strong and toned and carried themselves with the confidence and poise of lifelong dancers and gymnasts, because most of them were.

When I jerked my head up in an attempt to realize my own shampoo commercial fantasy, my hair flopped briefly skyward in a giant clump, and just as instantly fell flatly back against my face, tangling with the fake lashes.

As much as I tried in earnest to mimic the mechanical movements of the finely-tuned athletes around me, I knew from the first eight-count it was a lost cause. The practice area had no mirrors, so I had no way to tell if my body was actually doing what I was telling it to do. Ultimately that was a blessing, because I had no clue what I was doing. Even so, just doing it – regardless of how well – felt good.

There’s something highly meditative about surrendering your autonomy and willing your body to follow the movements of the person in front of you, and it was inspiring to be surrounded by so many other bodies moving so many different ways, each with their own style and grace and seemingly impossible skill.

Instead of feeling insecure, I floated through the day uncharacteristically at ease, freed from any pressure to succeed. I was without a doubt, the worst-seeded pick there, and though more miraculous things have happened, this was not about to be my personal Super Bowl.

Yet, no matter how many times I tried to laughingly explain to those around me that I truly didn’t have a chance, I was met with a chorus of, “Don’t say that!” and “You never know!” and “There’s always next year!” Cheerleaders are abundantly positive. 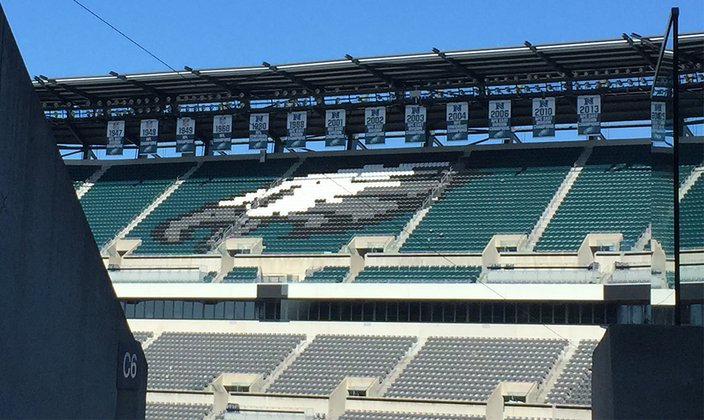 For Jenny Holt, part of the allure of attending Eagles cheerleading tryouts was the opportunity to step on the field where her Super Bowl champions play. Alas, it wasn't to be, though she did sneak this photo of the Eagles logo on the upper deck seats at the Linc.

I was in the last group to be called into the curtained-off judging quarters, around 4 p.m. I’d been steadily practicing for hours. I was semi-confident that even if I couldn’t do the moves correctly, I could at least maintain some semblance of uniformity, keeping my body in time, and facing the same way as everyone in my line for the duration of the dance.

But it was not to be. As soon as the music started, my mind went blank, I was immediately facing the wrong direction, and with no hope of regaining composure, proceeded to just let loose, doing what could only be described as an impression of a car-lot-wind-sock-blow-up-guy, limbs akimbo, fast and flailing, laughing the whole way through.

Unsurprisingly, I wasn’t called to continue on to the second round, but one woman in my group was, and while she likely would have been chosen whether I was there or not, I like to think my utter failure helped just a little, to spotlight her tremendous talent.

No matter how many times I tried to laughingly explain ... that I truly didn’t have a chance, I was met with a chorus of, “Don’t say that!” and “You never know!”

The overall vibe of the day was upbeat and communal; snacks and makeup and hairstyling tools were shared readily, and those who had the routine down pat, willingly spent their free time helping others learn the moves. Every single person I met was kind and warm and encouraging.

I was beginning to understand the upside of being a part of a team, or a squad, or a troupe. For these women, it was clear their main motivation for being an Eagles cheerleader had less to do with a love of the team (some had previously auditioned to cheer for other cities and sports), and everything to do with their love of performing.

That’s what they get out of it, that was the big secret: It’s a fun thing to do, if you’re into that kind of thing. It's just not for me.

They still deserve to be paid more, though.