What Philadelphia star athletes and coaches are the best golfers? 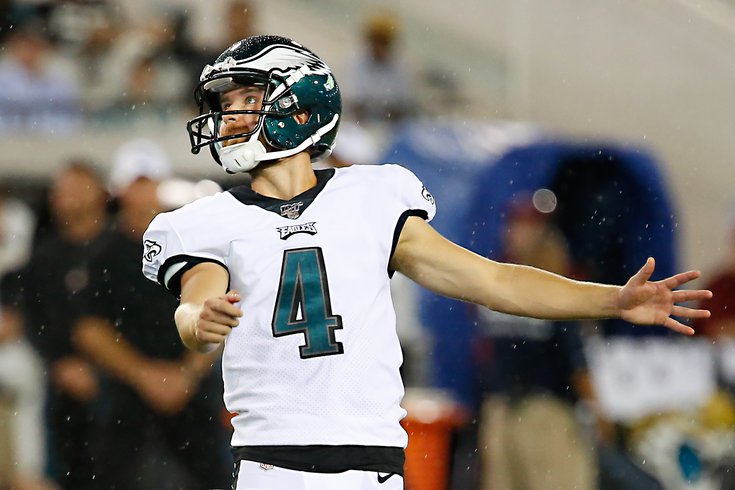 Philadelphia Eagles kicker Jake Elliott is quite the golfer.

If you love sports — and if you are reading this chances are you do — this Sunday's live golf match between Tiger Woods/Peyton Manning and Phil Mickelson/Tom Brady is surely a must-watch for you. Seeing Tiger and Phil duke it out is definitely a draw, but seeing former athletes play golf is also a very interesting spectacle.

We see them all the time, at Pebble Beach or in fundraising celebrity golf games, guys like Tony Romo and Michael Phelps impressing with the stick.

If you watched The Last Dance on ESPN over the past few weeks, you saw another example of a pro athlete (Michael Jordan) being pretty obsessed with golf. So what about in Philly? Do we have any current or former stars who are making birdies regularly in retirement or on their off days?

Who's the best former (or current) Philadelphia star athlete on the golf course? That's what we set out to learn. Just in case you are unfamiliar, we have ordered the pro athletes on this list by their reported USGA handicaps. We only included guys who have posted scores recently. Their handicap index is not exactly the average score they shoot over par — it's the average of the eight best of their last 20 scores. That number is then standardized, so a golfers handicap can be compared to another golfer. Brady is an 8.1, and Manning is a 6.4, for reference.

Could any of these guys make it on the pro tour? Probably not — a handicap in the plus-range range would be required. Still, several are surely making runs at their local club championships:

*Note: There are surely other talented golfers we could have included, but not all of them use the USGA's official GHIN database

Reese, the radio voice of the Eagles, hosts a charity tournament every year in Radnor. For 77 years old, he's pretty darn good.

Back in February, Girardi and Phillies owner John Middleton played a round of golf in Florida. The two were likely a pretty good match.

“I love it,” McKie said on a recent spring day when we had a chance to catch up. “If I am not watching college basketball, I am watching golf. I am drawn to it because it is such a difficult sport to learn, so difficult to master.”  [Jerseymanmagazine.com]

Middleton is worth $3.3 billion and is not surprisingly a member at the prestigious Merion Country Club, which hosted the U.S. Open back in 2013.

Lurie is a frequent participant in celebrity and charity golf games and at 68 years old, his game appears to be in pretty darn good shape.

The former Flyers' star is currently an assistant coach for the Penguins and a frequent golfer in charity tournaments.

Iggy is another frequent player on the charity and celebrity circuit. He's one of a handful of very talented golfers on the Golden State Warriors (Stephon Curry is a +1.9!). Here's Iguodala's swing:

The former standout receiver is a regular in local charity and celebrity tournaments.

In addition to hosting a celebrity tournament every summer, Jaws (the former Super Bowl quarterback for the Birds) is an entrepreneur who owns several local golf courses, so he better be good.

Pederson plays golf a lot and is apparently really good. Last year, he made a bet with his former offensive coordinator:

Pederson didn’t come close to winning the tournament, played at the Edgewood Tahoe South Golf Course along the banks of Lake Tahoe. But he accomplished his objective of beating his former offensive coordinator and current head coach of the Indianapolis Colts, Frank Reich, in a bet for charity. Just as he did a year earlier against New Orleans Saints coach Sean Payton, who had agreed to allow the Eagles to wear their home jerseys at New Orleans for their regular-season matchup if Pederson won.

This year Pederson bested Reich, who made a donation to the Eagles Autism Challenge. Had Reich won, Pederson would have had to donate to Reich’s selected charity, Ascent 121, which aids in the recovery of sex-trafficking victims.  [Morning Call]

Utley said he would play a lot of golf when he retired, and that's certainly held true as the former Phillies' All-Star has shown he can go low.

Kruk is a high-volume golfer when at home in Florida. He was asked by NBCSP about some of the forthcoming baseball rules regarding no spitting and he had this to say:

“I still do it on the golf course,” Kruk said. “I get to the first tee and I spit. Even the guys I play with do it and they weren’t ballplayers.”

Burrell, a former slugging outfielder for the Phils, is an extremely talented golfer who now lives in his home state of California and coaches in the Giants farm system.

Schmidt is really, really good at golf. About a decade ago, he was a +1.1 (meaning he averaged rounds under par). He is still a low single digit golfer at age 70.

Elliott's short game is on point. I'll let the video do the talking: