What they're saying about sports returning: NHL getting organized, MLB getting more complicated 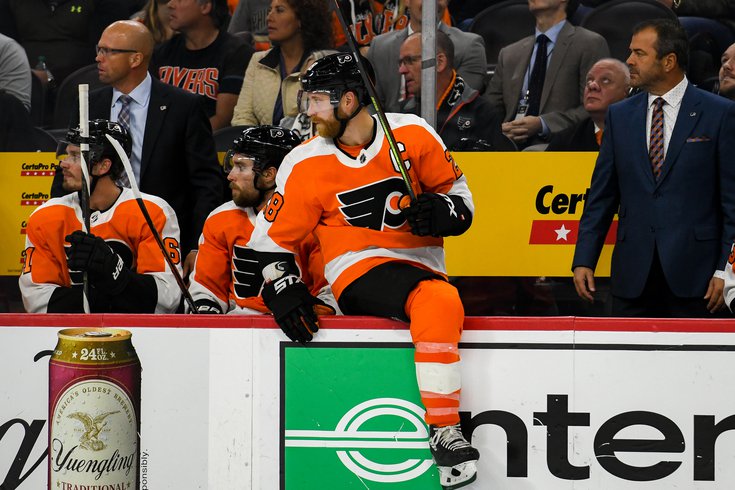 Flyers captain Claude Giroux prepares to hop the boards and get back on the ice.

Who would have thought it? Bringing back an entire industry built on hundreds of athletes, bolstered by thousands of support staff, in the middle of a global pandemic is very complicated.

The closer it sounds like leagues like the NHL or MLB get to making plans to commence athletic activity, the more infuriating issues seem to surface as players and owners try and work with health officials to create something workable.

Baseball is a good example of this. On the surface, the sport is non contact, it's played outside over vast spaces and it had the benefit of time, as it was able to delay its season to give it ample time to come up with a plan for some kind of altered and shortened season.

But the players, who have already taken a pay cut, are being asked to do so again. There are also major issues with service time. There are players with health concerns (or family members with concerns) everywhere, from Sean Doolittle to Mike Trout. The league would have to allow some players to sit out the year for their own personal or family reasons. Would they get paid? Would they get MLB service time?

Take the Phillies, for example. J.T. Realmuto's contract is expiring next year and he'll surely get a lucrative free agent deal. What if he becomes one of the concerned players and never plays again for the Phillies?

These issues are made even more complicated by the detailed and rigorous health protocols a new baseball season seems likely to demand. And that's where we'll start our latest edition of "what they're saying" about sports resuming:

Major League Baseball, late last week, apparently unveiled a 67-page manual meant to govern the conduct of players once the league starts up to try to protect health. It is a far-reaching list of rules and guidelines that almost threaten to make baseball a watered down version of itself (obviously for a good reason, but still). Here are a few cherry-picked rules from The Athletic's account of the document:

Individual and small group workouts consisting exclusively of pitchers and catchers. Divided into groups of five players or fewer and assigned different times and areas of the complex.

• Communal water and sports drink coolers/jugs are prohibited. Only personal water or individually prepared sports drink bottles or contactless water dispensers with disposable cups or should be used.

• No spitting, using smokeless tobacco and sunflower seeds in restricted areas. Any physical interactions such as high-fives, fist bumps and hugs must be avoided at club facilities....

• Lockers should be six feet apart. If not possible, clubs should erect temporary clubhouse or locker facilities in unused stadium space, preferably outdoors or in areas with increased ventilation.

• Showering will be discouraged at club facilities.

• Pitchers will use a personal set of baseballs during bullpen sessions and separate balls to demonstrate pitching grips or mechanics....

• When the ball is out of play or in between pitches, fielders are encouraged to retreat several steps away from the baserunner.

• Catchers are permitted to step on the grass toward the mound to give signs if he needs to stand to relay signs to infielders.

• Non-playing personnel must wear masks at all times in dugout.  [The Athletic]

You get the idea. It will be weird. Nothing major will change — it's still baseball — but the small subtle things that people kind of do naturally will need to be curbed to make it safer for players.

For an update on hockey we go to the source at NHL.com. Commissioner Gary Bettman talked to media members Monday sounding extremely optimistic that the league is inching ever closer to starting their proposed expanded 24-team playoff plan. The NHL seems to be the league that has it together the most in the face of resuming amid COVID-19, but the league does have one giant hurdle other sports don't need to contend with.

After things were paused in mid-March, dozens of players went back to their respective home countries. Coordinating travel from all over the globe to get the world's best hockey players back in one place may be a tough hurdle to clear. Still, the league is feeling good about its chances of succeeding in awarding the Stanley Cup sometime this summer:

The NHL is looking at "probably eight or nine different places" that can accommodate "a dozen or so teams in one location" as it explores options for resuming the season, Commissioner Gary Bettman said Monday.

The Commissioner participated in a digital keynote interview with Leaders Week, a sports business conference originally scheduled to be held in New York, to discuss the League's efforts since pausing the season due to concerns surrounding the coronavirus.

"I don't think anybody has a fixed timetable, particularly in North America right now," Commissioner Bettman said. "We have been working very hard since we took the pause on March 12 to make sure that whatever the timing is, whatever the sequencing is, whatever physical ability we have in terms of locations to play, that we're in a position to execute any or all of those options. There is still a great deal of uncertainty."  [NHL.com]

Hope for a full season

There seems to be a lot of buzz around the NBA not only crowning an eventual champion with playoffs to be held this summer, but also getting all 30 teams back into shape and into the gym to finish the regular season, which has 20 or so games remaining. It might not all get played, but according to Rockets owner Tilman Fertitta, the expectation is that something will come before the postseason.

“I think we would play some games to get it going again and create the interest,” Fertitta said, via the Washington Post, “then go right into the playoffs. I think it would be great for America. We’re all missing sports. Everyone wants to see these great NBA teams.”

It would, in theory, be easier to have fewer teams returning, even in an expanded playoff format, like the on the NHL is toiling with. But the players, not just the owners, sound like they want to have a regular season as well:

The Los Angeles Lakers star, speaking on the Uninterrupted platform's "WRTS: After Party" show that was released Monday, said it remains his wish that the season comes back "sooner than later." The NBA suspended the season on March 11 because of the coronavirus pandemic, and two unidentified members of the Lakers were among the league's players who subsequently tested positive for the virus.

"Definitely not giving up on the season," James said. "Not only myself and my teammates, the Lakers organization, we want to play. There's a lot of players that I know personally that want to play. And obviously, we don't ever want to jeopardize the health of any of our players or any of the players' families and so on and so on."

James was among a group of some of the league’s highest-paid players who met last week to talk about the season. National Basketball Players Association president Chris Paul of the Oklahoma City Thunder also part of the group. Those players affirmed to one another on that call that they would like to see the season resume. [Associated Press]

The report also says the NBA expects to make some kind of a decision on re-opening by June 5.

Yesterday, some particularly positive news for the NFL's hopes of having a regular, 16-game season emerged as California and New York announced their states would be permitted to host fan-less pro sports starting in June. Particularly in California, where tight restrictions put this in doubt, things are looking up. However, beyond the actual games being staged, there is a complicated dance of training camps scheduled to begin in July, and a great many of those actually are in doubt.

Many teams may have restrictions in their home states, keeping them from being able to have the required 100+ people together for team work outs and practices. Finding a new home where it is safe and legal to train may be a tough situation for teams this summer:

• And obviously, the first component to all of this will be whether or not teams in areas most affected can have training camp at home. This is where I think there is a chance teams could pull up stakes for a few weeks. The phased re-opening plans for states like Washington (Seahawks), New Jersey (Jets/Giants), and Massachusetts (Patriots) show that even if things go very well, it’ll be a close call on whether some will be permitted to have the level of gathering (150-plus people) necessary to stage camp on time. In this week’s MMQB, we explored the idea that college campuses could host camps, and University of Arizona AD Dave Heeke was another who got back to me today to say it’d be difficult to have an NFL team coming in, given the circumstances. “We haven’t had that conversation to any depth this year,” he said, while mentioning that Arizona had talked to the Raiders in the past about having camp in Tuscon. “It would be pretty challenging, especially at a time when we’re not completely ready to bring our own team back, and we don’t have procedures and protocols for the student body coming back yet either. … Logically, you think about it, how could we reintroduce 100 of our own players, and then on top of that all the other student-athletes, plus an NFL team? It’d be very tricky, a big challenge, so to be honest we wouldn’t even be ready to explore that yet.”   [Sports Illustrated]