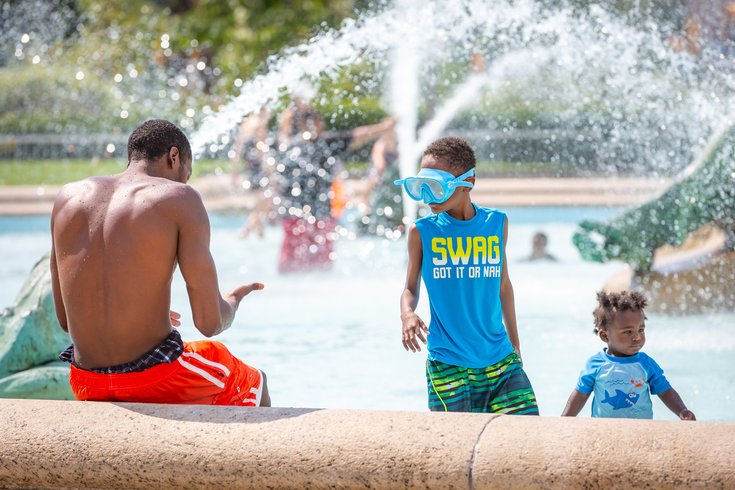 A family beats the summer heat in the Swann Memorial Fountain at Logan Square. The City of Philadelphia declared a Heat Health Emergency on Wednesday, as temperatures are expected to reach 100 degrees this weekend.

Philadelphia officially declared a Heat Health Emergency, starting Wednesday at noon and lasting until 11 p.m. on Sunday, as temperatures in the entire region soar.

The official declaration, issued by Health Commissioner Dr. Thomas Farley, means the city's Heatline, a special helpline number, will be open for calls. The Heatline offers health and safety tips, and connects people with medical professionals to ask about conditions and illnesses made worse from heat.

Extended hours at specific Free Library Cooling Center locations also will be in effect, as will enhanced daytime outreach for the city's homeless, according to a release from the Philadelphia's Office of Emergency Management.

"We strongly urge the public to visit older friends, relatives and neighbors to ensure that air conditioners or fans are working and homes are adequately ventilated," Farley said. "In a heat wave, the majority of the victims are older people and those with pre-existing medical conditions."

Due to extremely hot conditions, the City has declared a Heat Health Emergency.

Learn more about what services are available ➡️ https://t.co/kF9PSdWMPm pic.twitter.com/75UeHgXYHr

The high temperature on Saturday in Philadelphia is expected to reach, or eclipse, 100 degrees, according to Accuweather's models, and will feel even hotter. Around 2 p.m. Wednesday, when the actual measured temperature in the Philly was 95 degrees, Accuweather's Real Feel said the city actually felt like 105 degrees.

On Tuesday, the city released a Heat Vulnerability Index tool that allows residents to see the hottest parts of the city, compared with the city's average temperature. The tool also includes the locations of health centers and pools.