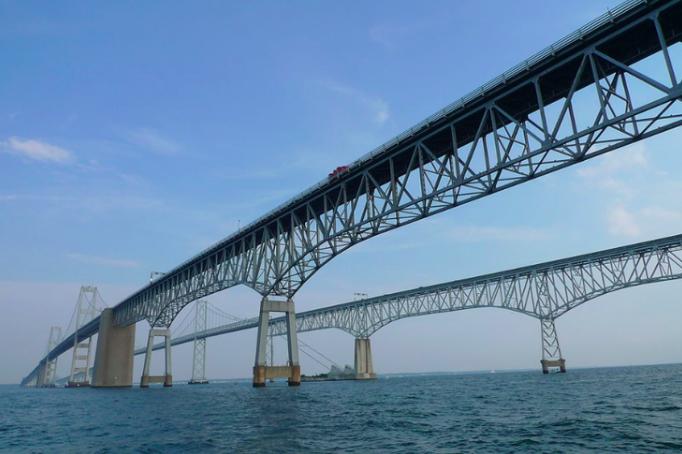 Maryland officials are becoming increasingly impatient with Pennsylvania's progress on efforts to clean up pollution in the Chesapeake Bay. Sediments including nitrogen and phosphorus are carried downstream to the bay through the Susquehanna River. The Chesapeake Bay Bridge, pictured above, is located near Annapolis, Maryland.

The editorial board of The Baltimore Sun is ready to throw down the gauntlet against Pennsylvania over the problem of pollution in the Chesapeake Bay.

The newspaper published a call on Monday for Maryland to sue Pennsylvania for failing to adequately uphold its cleanup responsibilities as part of the six-state Chesapeake Bay Program.

Maryland, Virginia and Pennsylvania have all agreed to contribute to cleanup efforts under the state-federal program, which is monitored by the Environmental Protection Agency. A recent EPA update noted Pennsylvania is "significantly off track" in meeting programmatic goals for reducing soil, nitrogen and phosphorus deposits in the watershed.

From The Baltimore Sun:

Pennsylvania isn’t holding up its end of the bargain. That much was made clear weeks ago when the EPA released its "Phase 3 Watershed Implementation Plans." Federal authorities recognize that Pennsylvania has fallen behind Maryland and Virginia in cleanup efforts. Frankly, it’s no surprise given the far greater incentive inherent to the two states that are home to the Chesapeake Bay and the bulk of its tributaries. The Susquehanna River provides most of the freshwater into the bay, however, and it’s a major source of pollution.

"To be blunt, we're literally drowning in Pennsylvania's trash, and I have a huge problem with that," Franchot said.

Part of the problem is that the Conowingo Dam, which was constructed on the Susquehanna River in 1929, has trapped more than 90 percent of its sediment capacity, according to the U.S. Geological Survey. Historic rainfall and flooding in Pennsylvania in recent years has only compounded the issue by carrying even more sediment over the dam and into the bay.

Pennsylvania's implementation goals for 2025 aim to mitigate pollution across more than 11,000 miles of in-state streams that eventually flow downstream to the Chesapeake Bay. One focus of the state's strategy is increased tracking of nitrogen reductions from sources not yet documented. Pennsylvania hopes to reduce its nitrogen runoff by 34 million pounds, but has faced challenges financing its initiatives.

The Baltimore Sun, noting the decline of the EPA's funding and regulatory enforcement under the Trump administration, argues that Maryland is left with one solid option — a lawsuit:

We don’t often root for lawsuits. But the old Pennsylvania tourism pitch line, "You’ve Got a Friend in Pennsylvania," doesn’t seem to be working anymore. We don’t need to return to the 289-year-old practice of border skirmishes with muskets and pitchforks, so siccing some attorneys on our recalcitrant neighbors appears to be the only reasonable choice left.

"Pennsylvania has been working diligently to be a good partner on Bay clean-up efforts and is working collaboratively with farmers and other stakeholders to implement best practices for sediment control in the watershed area," McDonnell said. "These efforts are bearing fruit, and while many challenges remain, the Wolf administration is committed to cleaning up the Susquehanna and Potomac watersheds."

The U.S. House of Representatives, defying the Trump administration's proposed 90 percent budget cut for the Chesapeake Bay Program in fiscal year 2020, approved $85 million in funding at the end of June. The ongoing federal support should help all states involved ramp up their compliance.

A spokesperson for Pennsylvania Gov. Tom Wolf dashed the idea of a lawsuit in a statement provided to PhillyVoice on Tuesday afternoon:

Pennsylvania has made great strides at improving local water quality in the watershed by investing in best practices and working collaboratively with our conservation and agriculture sectors. We’ve also stepped up our efforts. The Governor’s PA Farm Bill legislation, which was recently passed by the General Assembly, makes additional investments in local water quality improvements in the Chesapeake Bay Watershed and throughout the state. Unlike Maryland, Pennsylvania doesn’t benefit from the millions generated by tourism on the Chesapeake Bay. If any entity in Maryland is interested in diverting funds to Pennsylvania to bolster the Governor’s efforts, he would gladly accept them. A lawsuit would just take resources from efforts to solve the broader problem.

The EPA's Chesapeake Bay Program Office has been under new leadership since December 2018, when Penn State alumnus and chemical engineer Dana Aunkst took over as executive director. His familiarity and experience with Pennsylvania may help get the state on track in the years to come.

"As a problem solver, I am looking forward to the challenges in front of us in maintaining the momentum and getting to a restored Chesapeake Bay," Aunkst told Penn State News earlier this month.

The Chesapeake Bay is the largest estuary in North America, covering 64,000 square miles across New York, West Virginia, Pennsylvania, Delaware, Virginia, Maryland and the District of Columbia. The Chesapeake Bay Program, established under former President Ronald Reagan, has been around for 35 years.