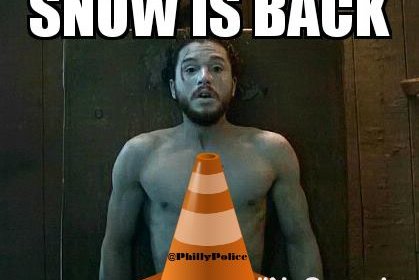 Philadelphia Police Department use a "Game of Thrones" parody to remind residents that saving a parking spot this winter could result in a citation.

Nothing says winter in Philadelphia like a bright, orange cone blocking the way of a perfectly open parking spot.

And with snowfall expected for the region Thursday, the Philadelphia Police Department put out a gentle reminder on its Facebook before those lawn chairs start popping up – #nosavesies.

Sgt. Eric Gripp said he created the "Game of Cones" meme himself accompanied with the hashtag that was started in 2014 to remind residents not to save the parking spots and to give the department a call to handle the situation if a chair or cone is spotted.

"I spent 12 years out on the street and dreaded [winter] because I knew when it snowed that this would happen," he said.

Gripp said that the move is illegal and though the department's first response is to just remove the cones or chairs themselves, offenders could perceived as "obstructing the highway" and face a $115 citation.

The Philadelphia region is expected to get anywhere from 1 to 3 inches of snow Thursday night that should start between 8 and 11 p.m.

"Saving spots could lead to fights, or terrible situations," Gripp said. "We'd rather be the bad guy."