Philadelphia ranks high in rates of five unhealthy behaviors, according to new data released by the Centers for Disease Control and Prevention.

The Pew Charitable Trusts sifted through the statistics from a 2014 telephone survey conducted as part of the CDC’s 500 Cities Project. The surveys were sponsored by the CDC but administered by state health departments.

RELATED: Why the Amish are uniquely qualified for a secondhand smoke study

Among the country's 30 largest cities, Philly had the second-highest rate of smoking, with 25.5 percent of adults reporting themselves as smokers. Only Detroit had a higher rate with 29.8 percent. 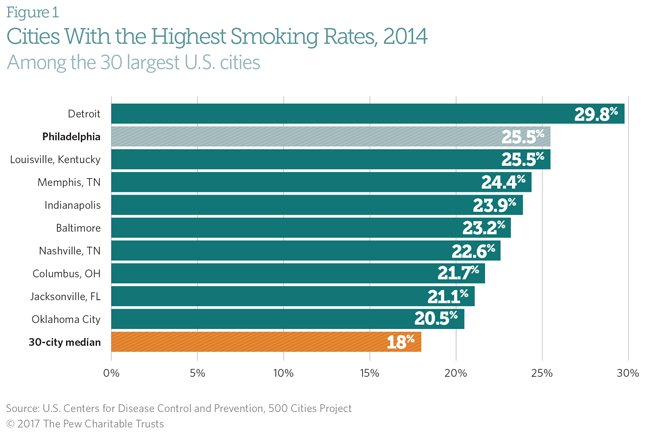 An infographic made by the Pew Charitable Trusts using data from a Centers for Disease Control and Prevention 2014 telephone survey on smoking rates in the 30 biggest cities in the United States.

Philly also ranked sixth-highest in adults who said they hadn't exercised outside of their regular job in the past month (29 percent). Detroit again had the highest rate, with 36.4 percent of respondents saying they hadn't. 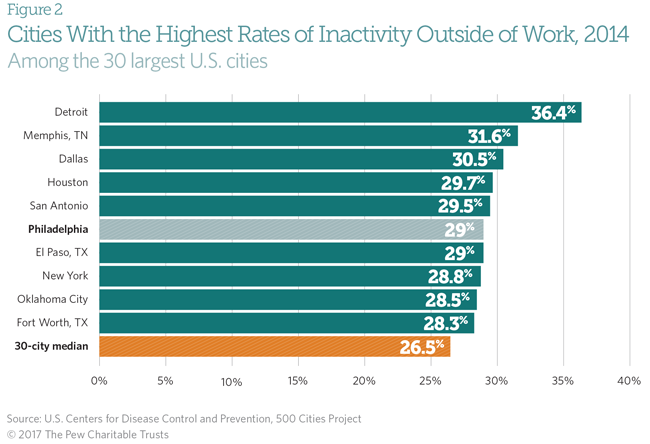 An infographic made by the Pew Charitable Trusts using data from a Centers for Disease Control and Prevention 2014 telephone survey on exercise rates in the 30 biggest cities in the United States.

Here's where Philly ranked in the three other categories of unhealthy behaviors:

• Binge drinking (In the past month, five or more drinks on one occasion for men, four or more for women) — eighth – 17.5 percent

• Sleep deprivation (Getting less than 7 hours of sleep a night on average) — third — 44.3 percent

Pew notes that all of the unhealthy behaviors except binge drinking tended to be more prevalent in cities that had poverty rates of 20 percent or higher, which was the case for Philadelphia.

But even when it comes to binge drinking, Philadelphia seemed to buck the trend. It was one of three cities with poverty rates above that mark that also made the top 10 for excessive alcohol consumption, with Boston and Chicago being the other two.

You can check out Pew's full breakdown of the CDC data here.