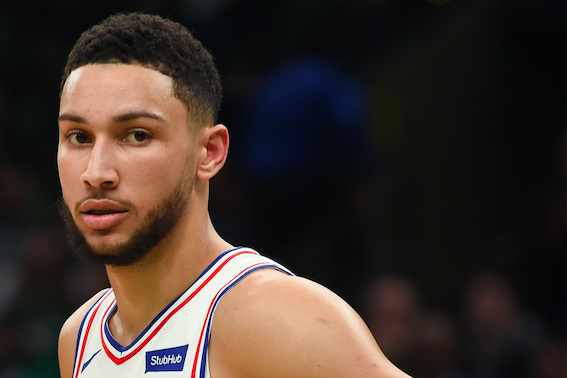 Dec 25, 2018; Boston, MA, USA; Philadelphia 76ers guard Ben Simmons (25) during the second half against the Boston Celtics at TD Garden.

The Philadelphia 76ers fell to the Boston Celtics 121-114 in an overtime loss on Christmas, providing more ammunition to critics who claim the team can't handle their rivals to the north, Toronto included.

There was a rare and beautiful bright spot that should serve as an encouraging sign to Sixers fans.

About half way through the fourth quarter, leading by two, Ben Simmons gathered a rebound off a Jimmy Butler miss. He paused for a beat and then tossed up a turnaround jumper from 22 feet. It went in the net.

This 22-foot jumper is the longest shot Ben Simmons has made in his NBA career. pic.twitter.com/xtJHLsaN5r

This is exactly what Sixers fans have been waiting to see — some willingness from Simmons to shoot the ball. Even if it had rimmed out, it would have been a welcome sign. Had the Sixers won the game, knowing this fan base, everyone would be boasting that Simmons' shot marks a turning point in a rivalry that's been titled in Boston's favor often because of how his shooting deficiency affects the game.

RELATED: The Sixers are a completely different team when Ben Simmons sets the tone

Does this mean Simmons can now reliably shoot the ball? Let alone a three-pointer? No, this wasn't magic.

What it does mean is that Simmons should be more confident about picking spots that are comfortable for him to shoot in meaningful game situations. Defenses now know there is a greater than zero percent chance that he will 1) take a shot and 2) make that shot. This is progress.

Twitter, as expected, was stunned by the appearance of Simmons' jumper.

santa gave him a jumper for christmas

Ben Simmons just hit a jumper outside the paint pic.twitter.com/BMWWTeOoFx

Regardless of what his critics say, Simmons is 22 years old and he is working on his shot. Sixers fans should be thrilled that they're starting to see it in games. They'll have to be patient when it looks bad.

Ben Simmons working on his jumper pregame (via @NBA) pic.twitter.com/jAomW8q23o

As GM Elton Brand said recently, putting the whole issue in perspective, Simmons' shot is a big part of his development plan.