What they're saying about the Union: The climb all the way back

The Union, after falling just short a year ago, came back to win the Eastern Conference and move on to their first-ever MLS Cup 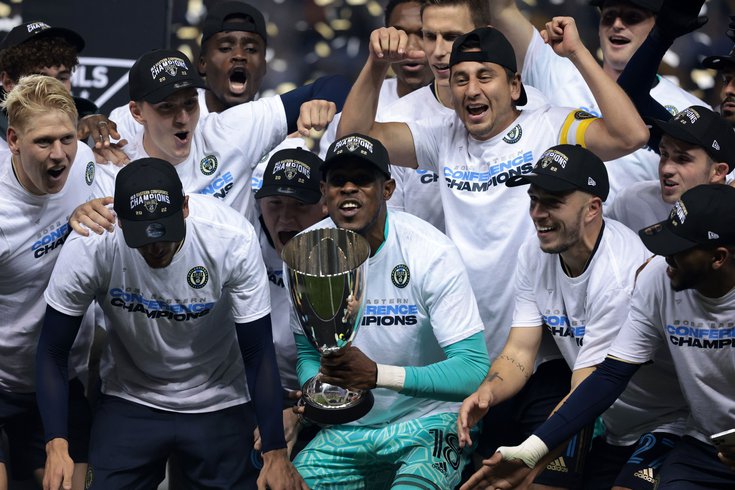 Goalkeeper Andre Blake and the Philadelphia Union celebrate after winning the Eastern Conference title at Subaru Park down in Chester on Sunday night.

A year ago, they were right there.

The Union, as one of the top teams in the East, were just a game away and looked fully ready to go to their first-ever MLS Cup.

Then, right before the Conference Final against New York City FC, COVID sidelined a chunk of the roster, putting 11 players and five regular starters into MLS' health and safety protocol.

They couldn't overcome it. The Union lost 2-1 and an incredible season stopped short on the doorstep because of circumstances completely out of their control.

But they climbed all the way back.

On Sunday night, in front of the home crowd at Subaru Park down in Chester, the Union, fully healthy as the East's top seed, weren't going to be denied again.

They scored three unanswered goals, got their revenge in the postseason rematch against New York City FC, and, finally, won the Eastern Conference to go on to the MLS Cup.

“What a team,” head coach Jim Curtin said postgame. “An incredible group of guys who have a belief and a fight that won’t be denied. It’s an amazing night, the biggest win in our club’s history. A real thank you to the fans who, even when we went down a goal, stayed loud, stayed with us, and never doubted us."

Founded in 2008 and beginning play in 2010, it's been a long, uphill battle to get here, both for the club and the growth of the game in Philadelphia.

But now the Union are just 90 minutes plus of soccer away from the North American summit, needing one more win against LAFC to reach it.

Here's what they're saying about the Eastern Conference Champion Philadelphia Union...

None of this was done overnight. The Union underwent a lot of growth through the years, and a lot of losing...a lot of it.

Coach Jim Curtin, a native of Oreland, and his longest-tenured players have seen the worst of it. On Sunday night, they finally got to experience the best, especially team captain Alejandro Bedoya.

Wrote The Inquirer's Jonathan Tannenwald, who has been covering the Union and soccer at large for a long, long time:

No one symbolizes the Union’s growth in mental fortitude more than their captain, Alejandro Bedoya. Since arriving in 2016, he has given countless pregame speeches and postgame reflections — with many of the latter being laments over blown leads.

“When I got here, there was a lot of a lot of things that weren’t really good enough,” he said. “And you see how much we’ve changed, in terms of the type of players we’re bringing in now, our academy improving, and just the mentality. It’s a change of culture.”

This time, even though he watched the second half from the bench while nursing a hip flexor strain, Bedoya got to celebrate a comeback win for the ages.

“A credit to Jim and his coaching staff,” he said. “And of course, I have a part to play in it, but I’m just proud of the effort. The resilience that the guys showed today is just incredible.” [The Inquirer]

Something that really stuck with me when I visited the Union a month ago for their media camp was Curtin's talk about the club's approach to talent and roster development.

They don't have star power, and they don't even necessarily want it. Instead, they aim to field a complete lineup, one that thrives in transition, and does all the little things well to wear opponents down.

Under Curtin’s reign, the Union have checked off a lot of “firsts”, the peak of which was their first-ever trophy in 2020 by winning the Supporters’ Shield. This year was their best-ever season by terms of goal difference (+46), the second best in league history.

Curtin’s press conference was cut short by fan favorite Jose Martinez. The Venezuelan midfielder came into the room with ski goggles on and a bottle of champagne in hand, beckoning his head coach to join the celebrations.

The camaraderie in the group is something easily evident when watching Philly play. Based around an ethos where the team is the star and everybody works hard in a cohesive high pressing system, the Union have punched above their weight for years and are recognized among the league’s very best teams over the last half-decade.

“I’m really proud of the guys,” Blake, a three-time Allstate MLS Goalkeeper of the Year award winner, said. “Philadelphia is all I know, I’m just so happy that we were able to celebrate in front of our fans." [MLSsoccer.com]

The center of the sports world

There really isn't any place else to be.

This place is off the charts loud tonight. WOW. Philadelphia Union at home against NYCFC… winner… heads to MLS Cup. @FS1 now pic.twitter.com/wTmHTrdlqA

Sprinkle in Flyers & Sixers too.

Los Angeles will host the MLS Cup this Saturday. Kickoff is set for 4 p.m. ET.