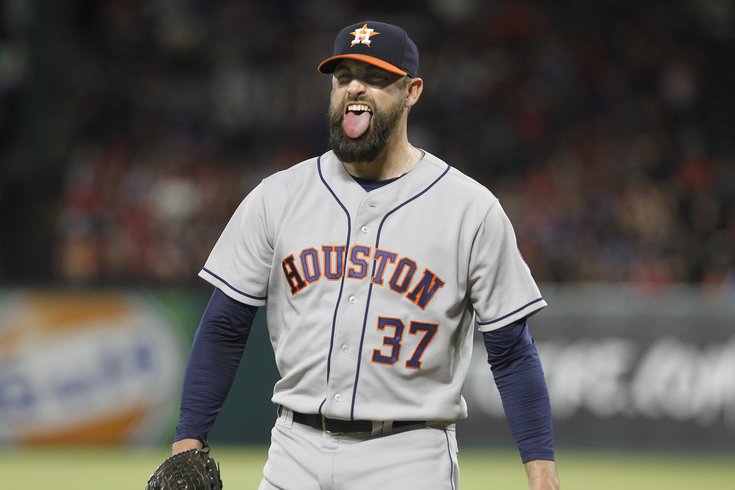 Relief pitcher (and former All-Star) Pat Neshek was acquired by the Phillies on Friday.

The Phillies bullpen, which finished the 2016 season with the third worst ERA in all of Major League Baseball (5.05), added some much-needed help on Friday when the team acquired right-handed reliever Pat Neshek from the Houston Astros in exchange for a player to be named later or, more likely, cash considerations.

"One of our goals for the offseason is going to be to give Pete [Mackanin] a bullpen that can really compete from one through seven," GM Matt Klentak said. "I think last year we saw for much of the season we were really competitive in save situations in the seventh, eighth and ninth with [Edubray] Ramos, [Hector] Neris and [Jeanmar] Gomez. It's a goal of ours this year to really try to be competitive with the entire bullpen.

"We really think Pat Neshek will help us in those efforts. Pat has a had a really strong three-year run. He controls the strike zone on the mound, which is something we talk about a lot. He is outstanding against righthanded hitters. We think he'll be a good fit."

The Phillies also exercised the one-year club option on Neshek, which will cost them $6.5 million, in order to keep him for the upcoming season. According to Klentak, part of the reason this deal came together when it did is because the Astros were going to be forced to make a decision on Neshek's option by Saturday.

So why are the Phillies, a team in the midst of a rebuild, spending that kind of money on a 36-year-old reliever?

"As far as his age is concerned, the relevance of that is tempered somewhat by the fact that it's a one-year commitment," Klentak said. "The recent track record of his performance has been pretty good. The core of our team is likely to be fairly young next year. This is not unlike what we did a year ago with Jeremy Hellickson or Charlie Morton -- acquiring a player via a trade on a shorter-term commitment. We'll hopeful that this one will work out as well as Hellickson did last year."

Or, perhaps, they'll wind up dealing him at the deadline in an effort to further their rebuild efforts.

Neshek went 2-2 with a 3.06 ERA and a 0.94 WHIP in 47 innings (60 appearances) last season with the Astros. He ranked 12th among all American League relievers against right-handed hitters, holding them to a .172 average in 2016. Neshek also had the eighth-most effective slider of any AL reliever this year (according to FanGraphs’ weighted pitch types), behind only Dellin Betances, Ken Giles, Andrew Miller, Alex Colome, Steve Cishek, Nate Jones and Robbie Ross Jr.

Here's a look at what he's done over his 10-year MLB career, one that's included stops in Minnesota, San Diego, Oakland, St. Louis, and Houston.

A former sixth-round pick (2002) out of Butler, Neshek was named to the 2014 National League All-Star team while pitching for the Cardinals.

The Phillies' 40-man roster now stands at 32 players. Klentak said that this signing won't have an immediate impact on any of the current members of the bullpen, but that may change as the roster fills out. Especially considering the young GM isn't ruling out adding more depth to his 'pen.

"We are open to exploring the best values in the market," Klentak added. "We know that we want to get better next year. We know there are a few areas where we can do so. Adding quality arms to our bullpen is one of those areas for sure."