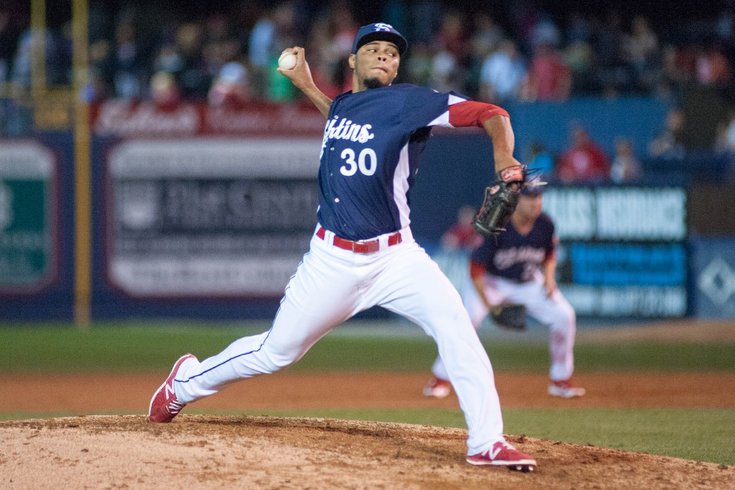 Jimmy Cordero, who battled health and consistency in his only full season in the Phillies organization, was traded to the Washington Nationals on Wednesday.

A year ago, he looked liked as good of a candidate as any from the farm system to be labeled the closer of the future.

“He’s got a special arm,” Joe Jordan, the Phillies director of player development said last winter. “We don’t have a better arm in our organization, anywhere.”

Now he’s a member of the Washington Nationals organization.

The Phillies traded right-handed pitcher Jimmy Cordero to the Washington Nationals for a player to be named later or cash considerations, the club announced on Wednesday. The 25-year-old Cordero, the owner of a fastball that’s reached 104-MPH, had been acquired by the Phillies just 16 months ago in the trade that sent Ben Revere to the Toronto Blue Jays.

“Obviously a year ago at this time we were pretty high on Jimmy,” general manager Matt Klentak said on Friday, after the promising reliever was removed from the roster. “So much so that we added him to the roster. And his year was not as productive as we had hoped or as he had hoped. It becomes a numbers game. That might sound cliche but truly that’s the reality. We like him a lot. We’d love to keep him in the organization if possible, but, in order to add the players that we felt we needed to add today, we had to make a couple of tough roster decisions.”

In his first full season in the Phillies organization, Cordero appeared in just 22 minor league games between four teams, with unimpressive numbers across the board (1.37 WHIP, 1.90 K/BB rate, 11 wild pitches in 27 innings). Cordero also battled health issues throughout the season, dating back to spring training, when a biceps injury kept him out of the entirety of the Grapefruit League schedule.

Alberto Tirado, the other pitcher the Phillies received in the Revere trade, was added to the 40-man roster on Friday.

David Buchanan, who like Cordero was designated for assignment and, thus, removed from the 40-man roster on Friday, was officially released on Wednesday. Buchanan had a 5.01 ERA in 35 starts with the Phillies in 2014 and 2015 but never earned a promotion to the big league club in 2016.