Phillies Minor League Notes: Alfaro could return as soon as next week 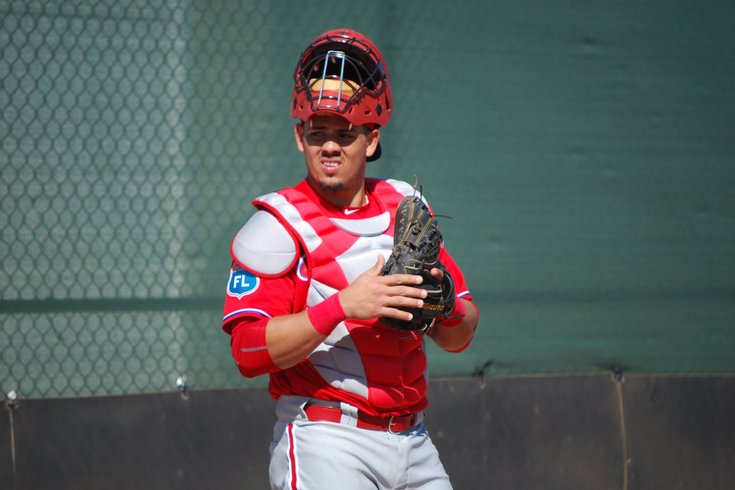 Jorge Alfaro has been cleared to resume baseball activities and could return as early as next week from the oblique injury that landed him on the disabled list last week.

Alfaro, the 22-year-old catching prospect acquired from Texas in the Cole Hamels trade, was off to a torrid start at the plate through the first two weeks of the minor league season. He was named the Eastern League’s Player of the Week last Monday.

But then an oblique injury landed him on the DL last Tuesday and it was feared he could miss as much as a month, as such rib cage injuries are generally troublesome and take time to heal. Phillies player development director Joe Jordan said on Monday that it “won’t take that long,” however.

“If we don’t have a reoccurrence he’ll get back into game action at some point at the beginning of (Reading’s) upcoming road trip,” Jordan said. “Maybe not this weekend but as early as the beginning of next week.”

Alfaro is hitting .500 (18-for-36) with a home run, a triple, and four doubles in eight games at Double-A Reading. Despite Alfaro missing the last week, only 15 players in the Eastern League have more total bases than Alfaro’s 27.

Two of those players are his Reading teammates, outfielder Dylan Cozens and Angelo Mora.

The 21-year-old Cozens, the Phillies second-round pick in 2012, entered Monday hitting .242 with four home runs, four doubles and an .814 OPS in 16 games. Mora, 23, was hitting .293 with two home runs, five doubles, a triple, and an .877 OPS. Mora has played both third base and all three outfield positions in 15 games this season for Reading.

With a rotation stacked with prospects at Triple-A Lehigh Valley for the first time in recent memory, the Phillies have more than a couple of options for filling the roster spot of right-hander starter Charlie Morton, who was placed on the 15-day disabled list on Sunday with a left hamstring strain.

But Adam Morgan would still seem to be the most obvious choice.

Morgan, 26, lost out on the fifth starter job to Vince Velasquez in the final week of spring training. He is 1-1 with a 4.58 ERA in three starts with the IronPigs. Morgan held Syracuse to two runs in seven innings while striking out six and walking one in seven innings in his most recent start on Thursday.

The IronPigs currently have Morgan on tap to start on Tuesday at Scranton. If he’s scratched or pulled after an inning or two, that would sound off the siren that he would be jumping into Morton’s spot in the Phillies rotation, which comes on Friday at Citizens Bank Park against the Cleveland Indians.

After more than two weeks into the season, top prospect J.P. Crawford is continuing to show more maturity at the plate than you would expect from a player that’s just three years removed from playing in high school.

Crawford, who turned 21 in January, entered play on Monday with more walks than strikeouts in 299 career minor league games since being selected by the Phillies with the 16th overall pick in the 2013 draft. After drawing eight walks in six games last week, Crawford has 173 walks and 172 strikeouts in his career through the Eastern League, the Florida State League, the Sally League and the Gulf Coast League.

Crawford, rated the sixth-best prospect in baseball by Baseball America over the winter, has plate discipline numbers that compare favorably to his fellow top prospects and Phillies prospects of the past, too. Jimmy Rollins finished with more walks than strikeouts in 1999; the then-20-year-old future National League MVP had 51 walks and 47 strikeouts in 133 games at Double-A Reading that summer.

If Crawford keeps it up, he could earn a quick promotion to Triple-A Lehigh Valley. The Phillies would still like to see more consistency in the field, however: Crawford, a shortstop, has been charged with four errors in his first 16 games at Reading this season (after making 27 errors in 106 games between Reading and Class A Clearwater last season).

Crawford is hitting .306 with an .846 OPS, a home run, four doubles, nine strikeouts and 13 walks at Reading through the season's first two-plus weeks.

Ben Lively was named the Eastern League's Pitcher of the week on Monday. Lively, 24, is 2-0 with a 1.50 ERA in four starts at Double-A Reading, racking up 27 strikeouts to just two walks in 24 innings. The right-hander didn’t allow a run in two starts (13 innings) last week.

Lively, acquired from the Cincinnati Reds for Marlon Byrd in December of 2014, will take a 16-inning scoreless streak into his next start, which is tentatively scheduled for Saturday at Portland.

The Phillies, who begin a three-game series at Washington on Tuesday, made a roster move on Monday. Outfielder Cedric Hunter, who started in left field on Opening Day, cleared waivers and was outrighted off the 40-man roster.

Hunter had been designated for assignment last week when the Phillies brought David Lough up from Triple-A Lehigh Valley.

The Phillies have outrighted Cedric Hunter off the 40-man roster.