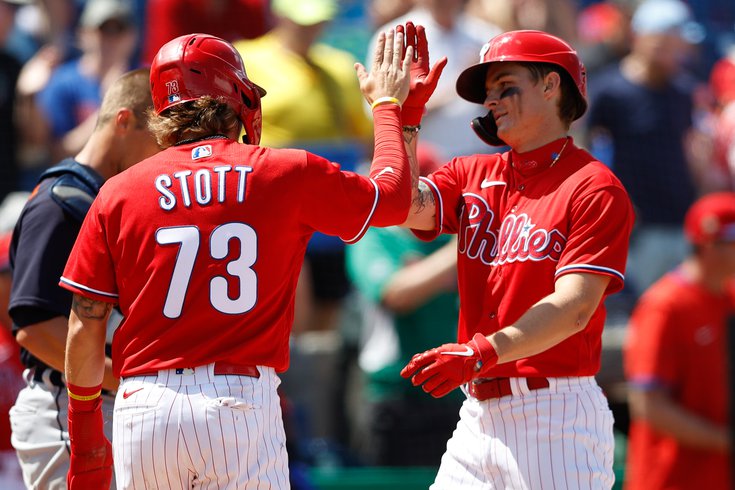 The Phillies have not gotten what they hoped they would from first-round picks Bryson Stott and Mickey Moniak.

If you're a big enough Phillies fan to be reading about the upcoming MLB Draft — kicking off Sunday as All-Star festivities begin in Los Angeles — you no doubt already know that drafting (and developing draft picks) has been the Achilles heel of a baseball franchise that has not competed since, well, Ryan Howard tore his Achilles heel in 2011.

There are a lot of reasons why the Phillies haven't reached the postseason since that gut-wrenching first round loss to the Cardinals, but one of the biggest ones has to be that the team has drafted poorly. Really poorly.

Here's an updated look at a table we built two years ago, discussing this very issue, comparing the Phillies' first-round pick hit rate over the last two decades to the MLB average, which sees 66% of first-rounders make it to the majors:

Look at all of those failed draft picks who would have been contributors to the post-2008 era of Phillies baseball had they panned out.

Not including the two most recent Phillies first-round picks, which we'll give more time to develop (and who are pitching rather well in the low minors), eight of 18 first-round draft choices have appeared in a game for the Phillies, or 44.4%, well short of the league average of 66%. Of those 18, 12 did actually make it to the majors, with a few of them getting chances with other teams after being traded. The quality is the issue here, not the quantity though.

Here is a look at drafted WAR by all organizations since 2010. Astros in the lead by quite a bit. The Angels, Tigers, and Yankees have accumulated the least amount of value through the draft. Angels are not last as I previously Tweeted, but they are pretty close to last https://t.co/ZzPwNj87IY pic.twitter.com/fDQg6djQKx

Aaron Nola was an All-Star and Cy Young contender a few years back and has pitched like a borderline ace in 2022. Alec Bohm has clicked as a starting infielder with a reliable bat while, Adam Haseley, Mickey Moniak and Cornelius Randolph all appear to have been busts. Bryson Stott is a rookie but has struggled mightily in the big leagues hitting .187 this season.

The Phillies have gotten one All-Star appearance from their last 18 first-round picks. And as a result, the team has had to spend, spend, spend to fill in the gaps.

You can't tell the whole story, though, without giving credit to the Phillies for trading away seven of the aforementioned first-round picks (signified with the asterisk). Here's what they got for them:

*Most of the trades worked out.

The team has another chance to make it right on Sunday when they pick 17th overall.

And all signs point to them going for a pitcher, as they try and replicate recent successes that have been Andrew Painter, Mick Abel, recent high pick Griff McGarry, and others performing well in the minors currently. Here's more from The Athletic's Matt Gelb:

The Phillies have become better at developing pitchers. Does that factor into draft decisions? “Yeah,” Barber said. “Oh, 100 percent.” There is improved communication with player development, through Preston Mattingly, the team’s first-year farm director, and it’s not just talk. It is a realistic assessment of the organization.

“You have to talk and discuss about what we think we do really well in player development and the things that everybody is really still struggling with,” Barber said. “And what you think (scouting) can help with. I’m not sure that there’s necessarily a magic formula that any of the 30 clubs have, but there are strengths within each one that you do a little bit better. So I think it gives us more comfort on the scouting side of things that I think that we do well and that Preston thinks that they do well to maybe take some potential picks.

“But you also don’t want to take anybody out of the mix that you just think is really a special player or just (so) talented that, even though that might not be your strengths, this player is just the right player to take.”

So, it’s no lock the Phillies pluck a prep pitcher again with the 17th pick. But it is probably better than a 50-50 chance, at least, that they draft a pitcher. The top of the draft will be hitter-heavy, Barber said. As more clubs resist drafting high schoolers, is there an advantage for teams like the Phillies that are willing to assume those projects? Abel and Painter were rated among the top prep pitchers in their classes and still fell to the middle of the first round. [The Athletic]

The Phillies don't have a second-round pick, so after 17 they won't select again until 93 overall. After that, they'll pick in that same slot in each round for Days 2 and 3 of the draft.

The first two rounds will be Sunday at 7 pm with the draft resuming at 2 p.m. on Monday and Tuesday respectively.

We'll have full coverage and analysis of the Phillies' picks here throughout the next few days.