Phillies' playoff position slipping away as contenders head to town 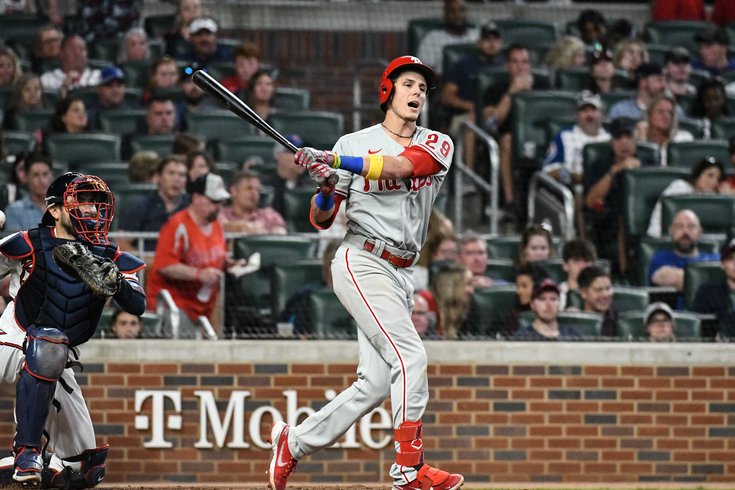 The Braves had the Phillies' number in Atlanta this past weekend.

The Phillies began the week looking like playoff locks.

After four straight losses and a sweep at the hands of potential Wild Card round opponent the Braves, it's nearing the time to sound the alarm.

We've documented prior playoff collapses — they have been September staples, like pumpkin flavored everything this time of year. We've also looked at which of the three potential NL foes (the Mets, Braves or Cardinals) they may have the best chance against in a three-game postseason series. Perhaps that was premature?

Philadelphia's playoff odds (according to baseball reference) went down more than 9 percent over the last week, with the trailing Padres odds improving by more than 26 percent. If the season ended today (it doesn't, there are still 16 games), the Phillies would narrowly make it in as the final Wild Card team and play the NL Central-leading Cardinals in St. Louis.

The Phillies have a really tough and really important stretch of five games ahead. Before we shift back to Citizens Bank Park for the final homestand of the season, let's acknowledge a few important points from the Phils' sweep in Atlanta:

• The Phillies were out-scored 16-7 in three games against the Braves. Their offense really looked stuck in the mud, particularly in key spots. Though they did generate 18 hits over the series, they stranded 20 runners on base. There's the formula right there — plate a few more runs and perhaps you can avoid a sweep to a division foe.

The team was also pretty futile with runners in scoring position, going 5-for-24 in such spots (.208 batting average). Failing to convert opportunities this often not only shoots an offense in the foot, it also gives momentum and confidence to the opposing pitcher which is never a helpful thing. On the year, the Phillies hit a respectable .274 with RISP.

• With Nick Castellanos still sidelined and Bryce Harper unable to play the outfield due to his elbow issue, the Phillies have kind of had a makeshift outfield down the stretch this season. A combination of Brandon Marsh, Matt Vierling, Nick Maton and Dalton Guthrie roamed the outfield alongside Kyle Schwarber this series and the results were mostly as you'd expect.

Aside from a pair of key RBI from Vierling, these outfielders did very little offensively, going 5-for-21 combined (.238 average). Castellanos' healthy return will have a very helpful trickle down effect on the offense. It can't come soon enough.

• Zack Wheeler is slated to return in Game 2 of Philly's quick two-game set against the Blue Jays this week, with Kyle Gibson on the mound in the series opener. Having Wheeler back could be huge for the team too, and he'll have two or three more starts to round into form before assumably pitching in a playoff game for the first time in October.

• Whilst the Phillies vie with the Blue Jays (83-84) and then the Braves again this weekend (91-55), the Padres will face the Cardinals (87-61) followed by the non-contending Rockies and then the NL best Dodgers (101-44). There is a chance for Philadelphia to get back into the second Wild Card spot.

The charging Brewers will need to make up two games and will have their hands full with three games against the Mets (93-55) before a four-game set against a mediocre Reds team and then the aforementioned Cardinals.

It might be a little early for intense scoreboard watching, but the Phillies have the toughest slate this week and there's a chance they're out of the playoff picture by their next off day next Monday.