Can Phillies avoid another September collapse? 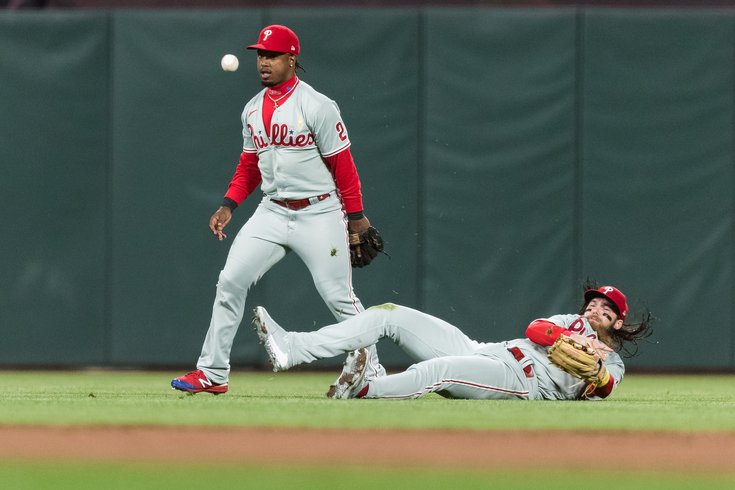 The Phillies have been out west and the Eagles have been ramping up to start their highly anticipated season — so the Phillies' putrid road trip this last week may not be the top thing on Philadelphia fans' minds right now.

But with a return to Citizens Bank Park and six-game homestead against the two worst teams in the division on the docket, starting Tuesday night as ace Aaron Nola takes the mound, it might not be an avoidable topic for much longer.

Things couldn't have gone much worse for the Phillies in Arizona and then San Francisco. When the month of September started, the Phils had a 93.4% chance of making the postseason and a 3.6% chance of winning the World Series, according to Baseball Reference. Those numbers were filed down to 87.6% and 1.3% respectively. They have lost six of their last seven dating back to a shutout loss to the lowly Pirates at home and were out-scored on the west coast 50-26, with 18 of those 26 runs coming in an anomaly of a win, 18-2 over the Diamondbacks.

But it's not just the offense letting the Phillies down. Their starting pitching — not long ago one of the biggest strengths and reasons for optimism for the team — has been awful. Setting aside for a second that Zack Wheeler is going to miss more time than expected, the results of late have not been encouraging.

For yet another season, the starting pitching depth is just not there, with Bailey Falter and Cristopher Sánchez the fill-ins for injured starters and barely holding steady at replacement level. They need Wheeler back, badly. But the failures obviously go across the board.

Nick Castellanos was an addition to the injury list during the Phils' recent road trip, making clear another glaring weakness depth-wise for this team: the outfield.

The Phils really only have three healthy outfielders, one of whom is really a DH (in Kyle Schwarber). Bryce Harper is still not able to play in left field, and it seems as though the team is really just another injured player away from being in deep trouble.

So what does it mean, with 28 games left, for the Phillies' playoff hopes?

Here's a look at the recent trend they're hoping to avoid:

The Phillies are about 9% worse in September, over the last four seasons. In each of them, they've been more or less in a playoff race (aside from 2019 where they were seven games out of the wild card on September 1). Combined, they went from 14 games back to 33.5 games back in one month of play per season. In each of the last four seasons, the Phils played awful in September — largely due to injuries and a lack of depth — and missed the playoffs (as they have for a decade now).

There are a few things going for them in 2022 that weren't in prior seasons.

• An expanded playoff field that has three Wild Cards from the NL.

• A two-game cushion over the Brewers, the third of three teams vying for two attainable Wild Card spots (the Padres are the other, with whom the Phils are currently tied).

• The Padres have the fourth toughest remaining schedule. The Phillies have the 18th toughest and have 16 of 28 games against the Marlins, Nationals and Cubs. (The Brewers have the 16th hardest.)

• A much better roster, top to bottom, than in previous seasons.

It is worth noting one schedule negative — that only 12 of their last 28 games are at home. Philadelphia is nine games above .500 at home but just three above .500 on the road.

The Phillies are in a weird predicament where they need to be cautious and get healthy (Castellanos and Wheeler will be extremely important in a playoff series), but also can't take their foot off the gas. They need to finish September with a winning record and take advantage of the scheduling gods giving them an edge on paper this month.

Will they become the fifth straight team with playoff aspirations to fall apart when the leaves turn brown? The pressure is on. Or maybe not. The Eagles will be happy to take (and keep) the spotlight come Sunday.