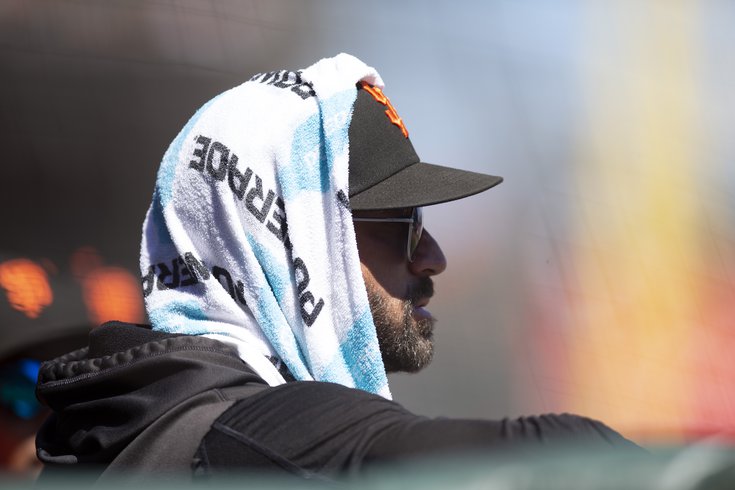 A dreaded West Coast trip: where the Phillies' playoff hopes go to die. The Phils have dropped back-to-back series, as pitching failed the team out in Arizona and then the Fightins were promptly swept in San Francisco. The Phillies have lost seven of their last eight games and have fallen to the third and final Wild Card spot in the National League, just 2.5 games up on the Brewers.

The hope of Phillies fans that it could be a smooth September with a playoff spot locked up before the end of the month has been thrown to the wind in the San Francisco Bay.

David once beat Goliath, but I'm thinking that Goliath wins that matchup 99 times out of 100. The Giants, man. There's a defeatist feeling when the Phils take on San Francisco. It stems from October 2010. 2010 was the last time the Phillies won a playoff series before falling in six games to the Giants. Cody bleeping Ross. Juan Uribe hitting the shortest home run in human history. Brian Wilson striking out Ryan Howard looking.

It's been burned into my brain since then that the Giants are some unsurmountable obstacle for the Phillies. They won the World Series three times in five years immediately after the Fightins were the class of the National League.

Making matters worse is Gabe Kapler, jettisoned from Philly before immediately catching on with the Giants, winning 107 games, Manager of the Year and making the postseason in 2021. Kapler has been to the playoffs more in the last two years than the Phillies have been in the last decade. Rough.

After series with the Diamondbacks where the Phillies gave up at least 12 runs in two of those three matchups, the Phils' pitching fell flat once more in the Bay. In the first game of the San Francisco trip, the Giants clobbered the Phillies 13-1. Kyle Gibson surrendered seven runs in fewer than two innings of work.

Fans can get as hyped as they want about a 1-2 playoff rotation of Zack Wheeler and Aaron Nola, but they're going to need some semblance of consistent from the rest of the rotation if they even want to get to the postseason to begin with.

Joc Pederson in five games against the Phillies in 2022:

In nine games since returning from injury, Bryce Harper is hitting .323 with an OPS of .835. The extra-base hits are lacking right now as Harper gets back in the swing of things. Of his 10 hits, just two are doubles and zero have been home runs. For a team that needs some energy and positive vibes to get the taste of this West Coast slip-up out of their mouths, a Harper homer in this upcoming slate of home games would do wonders.

The Phillies' next 15 games coming against divisional opponents. That starts on Tuesday night at Citizens Bank Park with a three-game set against the Marlins. Here are the probably pitchers for the series: