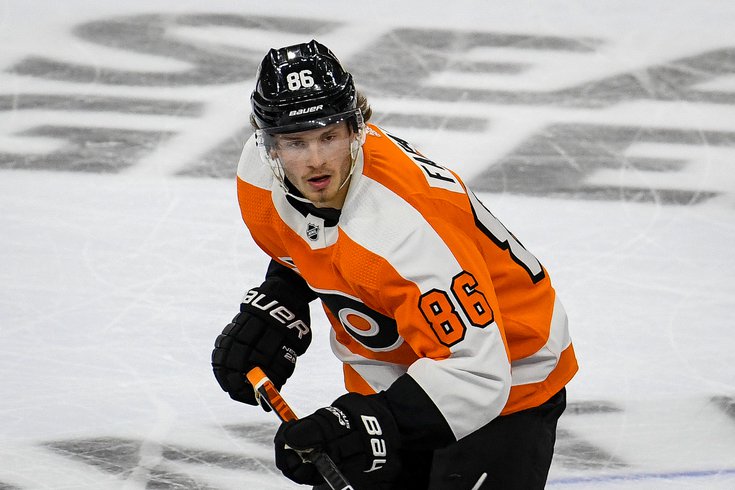 With Claude Giroux gone and off to Ottawa and Sean Couturier returning from back surgery but pushing 30, the Flyers need young star power for the future.

On Tuesday, The Athletic's NHL prospect analyst Corey Pronman published a list of the league's 170 best players under 23, and while not every name on there is going to be a guaranteed star, the Flyers do have three players who fell within the top 80, and that should be promising.

Hey, when things seem as dire as they've been, you gotta find hope somewhere, right?

Anyway, left winger Joel Farabee ranked out at No. 37, fifth-overall pick Cutter Gauthier at No. 54, and defenseman Cam York at No. 78.

Farabee potted 17 goals and 34 points last season and was praised heavily by Giroux and the team as the Flyers' next star before the captain was traded to Florida.

Of course, he did deal with injuries last year and had sudden disc replacement surgery this summer, which may keep him out for the start of this season.

Farabee played big minutes for the Flyers this season and was a regular on both special teams. He’s a highly intelligent and competitive forward. Farabee makes a lot of plays and has very good individual skill to go with his playmaking. He can beat you with skill or with his work ethic, regularly winning a lot of battles. He isn’t that physically imposing or fast though, but everything else about his game is good enough that he can be a legit top-line winger for a long time, even though I don’t ever think his scoring totals will be massive. [The Athletic, $]

Gauthier was dubbed an "upside play" by general manager Chuck Fletcher after the Flyers took him fifth overall at the draft earlier this summer, and has been considered one of the most NHL-ready players in the 2022 class.

He won't be there in October, he'll play a freshman season in Boston College first, but the Flyers will be banking on that booming shot to make a difference sooner rather than later.

Gauthier has the tools that can make you easily envision him in the NHL. He has a thick 6-foot-2 frame and can skate like an NHL player. With his size and speed he can overpower opponents to force turnovers or in how he attacks the net and it makes him an asset on the PK. Gauthier can create with his skating and skill, but his main offensive weapon is his shot. He can pick corners from distance with a powerful wrist shot. I didn’t love his playmaking early on but that part of his game grew on me as the season went on, especially how he made passes on the move. I see a potential very good top-six forward whether at center or the wing with a chance to pop and become a true top-of-the-lineup type. [The Athletic, $]

York, the Flyers' first-round pick from 2019, made his way up halfway through the season and steadily took on more and more minutes and responsibility as things wore on, and with Ryan Ellis' health keeping the Flyers' defensive depth an uncertainty, he can really help make up for that with a big year 2.

York was a top player for his AHL team as a 20-year-old, and ended up getting a lot of games with the Flyers. York’s value comes from his offense and puck-moving game. He has great skill but doesn’t often lean on it, opting to be more of a clever puck-mover who makes the right play all the time with flashes of higher-level creativity. Defensively he’s fine due to his brain and good-enough mobility. He competes hard enough but isn’t overly physical. He projects as a second-pair defenseman who can help a power play. [The Athletic, $]

The Flyers signed right winger Hayden Hodgson to a two-year deal on Monday, getting their final restricted free agent under contract before the turn of the month.

The deal carries an average annual value of $800,000 at the NHL level, and will be two-way in year 1, then one-way in Year 2, per CapFriendly.

Flyers have now signed all of their Restricted Free agents. https://t.co/rysFNC8Ek1

Hodgson, 26, skated six games for the Flyers late last season, putting up a goal and two assists for three points, which included his first career goal in his NHL debut at St. Louis on March 24.

Hodgson, who spent most of the few years prior down in the ECHL, signed a one-year deal with the Flyers ahead of last season but spent the bulk of it with the AHL's Lehigh Valley Phantoms, where he recorded 19 goals, 31 points, and 70 penalty minutes through 46 games.

He'll most likely go back to Lehigh Valley this season too, but depending on the Flyers' health, which was disastrous last season, can be counted on to fill in a bottom-six role on a call-up.

The Flyers extended qualifying offers to nine RFAs – forwards Wade Allison, Jackson Cates, Morgan Frost, Hodgson, Tanner Laczynski, Zack MacEwen, Isaac Ratcliffe, Owen Tippett and defenseman Linus Högberg – in July, and as the weeks went by, slowly but surely reached agreements with all of them on low-term, low-cost contracts, which is all the team could really do because of salary cap constraints (as of Monday, they're just shy of $2.4 million over).

Their group heading into training camp next month is pretty much locked in now.