The only RFA left is winger Hayden Hodgson 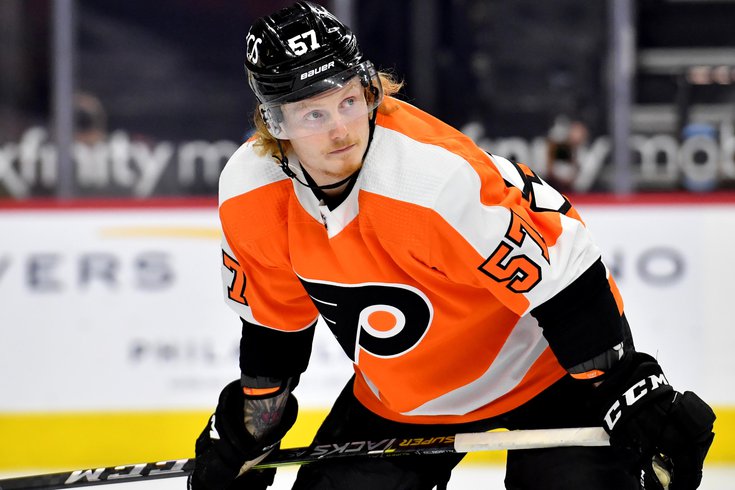 Flyers winger Wade Allison back in 2021.

The Flyers got Wade Allison and Linus Högberg under contract on Friday, which nearly puts a wrap on the front office's to-do list heading into training camp.

Allison, 24, signed a two-year two-way/one-way deal at $785,000 per. The 2016 second-round draft pick is a versatile winger and has been on the bubble of cracking the Flyers' roster full-time, but injuries have gotten in the way at nearly every turn.

He flashed promise at the end of the COVID-shortened 2021 season, when he was called up and netted fur goals and three assists through 14 games, but appeared in just one game for the Flyers this season back in January and skated just 28 for the Phantoms down in the AHL.

This could be a make-or-break camp for Allison, who starred for four years at Western Michigan in college, and his health will be paramount to that.

Högberg, a 23-year old Swedish defenseman taken in the fifth round of 2016, inked a one-year, two-way contract. He made his NHL debut last season, skating in five games for the Flyers and notched two assists.

Högberg will likely spend the bulk of his time down with Phantoms this year and serve as an emergency call-up when and if the defensive corps takes a hit.

The only RFA left is winger Hayden Hodgson.

A hire toward better health

The injury bug hit the Flyers hard last year and they still aren't over it. Joel Farabee and Bobby Brink both got hurt in the offseason and Ryan Ellis' health status is still a mystery, but leaning toward doubtful for the start of this season.

The Flyers are hoping things will get better with Ian McKeown around, who was hired Wednesday to a newly created role as the Vice President for Athlete Performance and Wellness.

"In order to compete at the highest level in today's game, our players need and deserve a modern, comprehensive performance and wellness program, and by hiring Ian for this new role, we're investing in a world-class program that we believe will significantly impact our players and our team," Fletcher said via a press release. "We are very excited to bring Ian into our group, and his experience in enabling peak athletic performance is unmatched. He will have a direct impact in reshaping and enhancing our players' abilities to perform at the highest level each day, including in practices and games, and recover on days away from the rink."

McKeown is coming stateside after nine seasons spent down under with Port Adelaide FC in the Australian Rules Football League.

It wasn't the sole reason the Flyers were so bad last season, but massive and nagging injuries to Farabee, Ellis, Sean Couturier, and Kevin Hayes certainly didn't help matters while the team was completely falling apart.

And coming into the season behind the eight-ball healthwise already isn't a source for much optimism.

The hope for the Flyers is that McKeown will begin shifting things back in the right direction on that front, though it's not clear what this means for longtime trainers Jim McCrossin and Sal Raffa, as pointed out by NBC Sports Philadelphia's Jordan Hall.