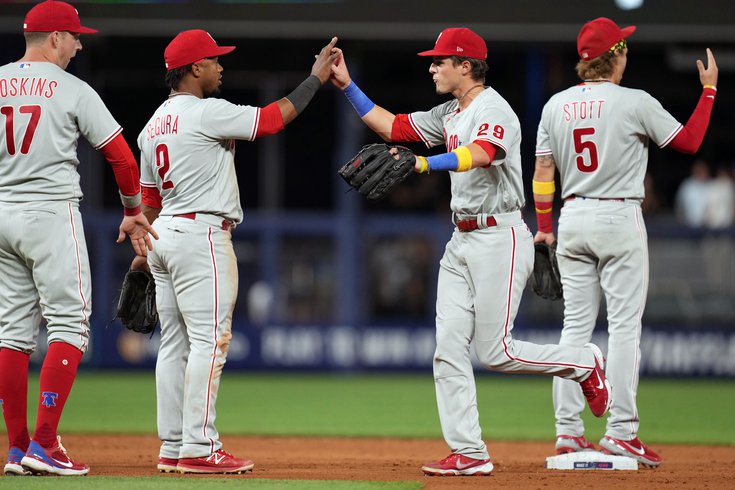 The Phillies are in good position heading into a serious three-game set against the Braves.

The Phillies took care of business against another sub-.500 team this week, winning two of three in Miami thanks in large part to surprisingly solid pitching from the back of the rotation. Philly has not faced a playoff-bound baseball team since they lost three of four to the Mets back on August 21. In the 22 games since (all against bad teams) the Phils are 14-8.

As we do after every series, here's a look at some big takeaways as we turn to the page to the Braves in Atlanta:

• As we mentioned, the back of the rotation shined in the Phils' two wins against the Fish, with Bailey Falter pitching six innings of one-run baseball during his turn on the mound, followed by the same from Kyle Gibson. Neither is likely to get a start in a potential three-game Wild Card series, but it's nice to take a little of the pressure off the shoulders of Aaron Nola, Zack Wheeler and Noah Syndergaard (who broke the five-game win streak in the series finale Thursday allowing four runs).

• Exactly who might be healthy and playing against the Braves and Jays is an open question, and it looks like Zach Eflin could find a role in the back of the Phillies bullpen after working his way back from an injury that cost him most of the 2022 season. The former starter tossed a perfect frame late in Wednesday's win, and having him to boost the bullpen is certainly a bonus.

Seranthony Domínguez also appears to be back in the fold. He pitched a scoreless stanza back on Tuesday. Having these two to get in the mix at the end of games with Brad Hand, Jose Alvarado and David Robinson already pitching meaningful innings makes the bullpen a potential strength here down the stretch.

• The biggest name bat still hurt is Nick Castellanos, who was eligible to return from the IL Tuesday but is not ready to play full speed yet. He is hitting the ball off a tee and it looks like his oblique strain won't keep him out of a potential playoff series, but it might be a series or two more of working his way back for the corner outfielder.

• Speaking of the outfield, with Castellanos sidelined and Bryce Harper still unable to throw the ball safely enough to play in right field, Matt Verling and Nick Maton have filled in with mixed results, though Maton had two RBI in the series-opening win against the Marlins. Maton has been a boost as a utility man who can start basically everywhere and he is hitting .294 this season.

• Zack Wheeler threw a 35-pitch bullpen session recently and is planning to throw live batting practice Friday. If all goes well, the Phillies' true ace could start against the Blue Jays on Tuesday with a chance for a few starts before the playoffs begin.

• One final injury-related note, after getting hit by a pitch in the hand, first baseman Rhys Hoskins had negative X-rays and is waiting for a bruise to settle down before taking the field again — most likely at some time against the Braves. It's a dodged bullet for the Phillies, who would have been in a world of trouble had Hoskins broken something.

• The Phillies have a pretty solid cushion with 19 games left to play, leading by 2.5 games for the No. 5 seed, and the Brewers by four games for the final playoff spot in the NL. They'll need to handle this stretch of games against contenders to really solidify their playoff hopefulness, otherwise they could have some work to do the last two weeks of the regular season.

• In Atlanta, Ranger Suárez will pitch the opener against Braves ace Max Fried (in a 7:20 p.m. start), Aaron Nola will take the hill for the middle game (also at 7:20 p.m.) against Jack Odorizzi, and Bailey Falter will pitch the afternoon finale against Spender Strider.