Should the Phillies prefer the Mets, Cardinals or Braves in the postseason?

If the Phillies make the playoffs, there are three scenarios that can take hold for the NL Wild Card round 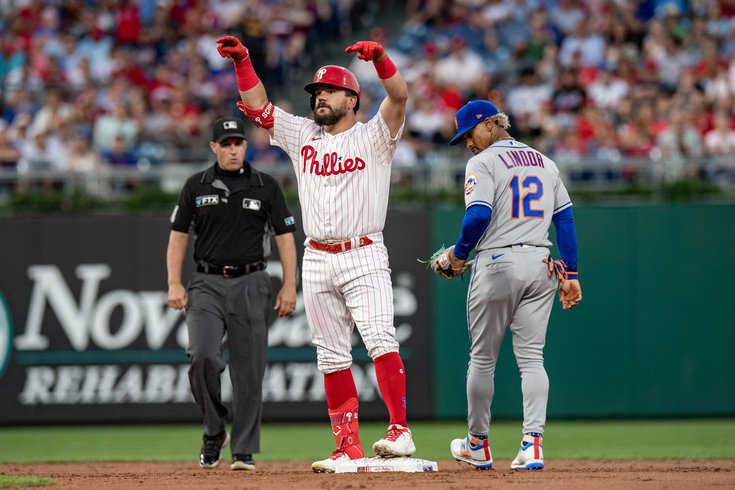 If the playoffs started today, the Mets would get a first round bye and the Phillies would be in the Wild Card round.

Ever since before the All-Star break, the Phillies have been locked into a three-way battle for two Wild Card spots in the NL, and it appears if they can hang on and close out the trailing Brewers they'll be playing some meaningful October baseball.

Their magic number as of Wednesday morning is 17 — meaning any combination of Phillies wins and Milwaukee losses adding up to 17 will clinch the first playoff berth for Philadelphia since before Ryan Howard tore his Achilles.

Interestingly, we know that if the Phillies keep their current playoff seed, they'll have to face a division opponent in the playoffs. With a nine-game gap between them and the NL East-leading Mets, there is almost no chance of the Phillies improving from the No. 2 Wild Card spot and the 5-seed. The NL East winner will more than likely have a first-round bye, as both the Braves and Mets are five games better than the NL Central-leading Cardinals. This all means that one of the following scenarios will hold if the Phils stave off the Brewers (over whom they have a four-game cushion):

• If the Mets hold on to win the NL East and the Phillies finish better than the Padres — the No. 5 Phillies face the No. 4 Braves.

• If the Braves catch the Mets and win the NL East and the Phillies finish better than the Padres — the No. 5 Phillies face the No. 4 Mets.

• If the Padres catch the Phillies — the No. 6 Phillies face the No. 3. Cardinals (regardless of who wins the NL East).

The Wild Card round is a three-game series held at the higher seed's field, meaning the Phillies cannot host a playoff game unless they win two of three on the road in the opening round. They do kind of have some kind of control over where they go, though at this point, ending the 10-year postseason drought is no doubt the priority for the team.

There is nothing better than scoreboard watching this time of year. Who should Phillies fans be rooting for as their playoff opponent?

As you can see, the Mets have pretty much dominated the Phillies while the other two teams offer a pretty negligible difference with one exception — the Phils had great success pitching against St. Louis (with a 2.95 ERA over seven games). *The Phillies face the Braves six more times.

The case for the Mets:

This is the hardest case of the three to make for obvious reasons. The Mets were responsible for forcing several awful collapses with the Phillies blowing a handful of leads to them throughout the season. Are the Mets in the Phillies' heads?

The top of the rotation in a playoff series for New York is really intimidating, with Jacob deGrom back and healthy and Max Scherzer likely to be back and ready for a series in October as well. The third starter would probably be Chris Bassett, who is 13-8 with a 3.44 ERA.

The key for the Phillies against the Mets would come down to pitching. Of the three teams we are considering here, the Mets have the worst offense and that would, on paper, give the Phillies' staff and bullpen an advantage when compared to the other two teams:

The above represents three of the top five teams in the NL by measure of OPS (the Phillies are one of those five as well), and facing those offenses will be no easy task. But perhaps the Phillies being just up the New Jersey Turnpike and so close to home could serve as an advantage?

New York is also whimpering a little, after a 19-11 record in August the Mets are a measly 6-6 so far in the month of September and have given up a ton of ground to the surging Braves.

The case for the Braves:

The Braves have the most home runs in baseball and a superior offense. They are kind of a sleeper World Series contender. They have a trio of starters who are also fairly intimidating in Max Fried, Kyle Wright, and Spencer Strider.

There is a big "TBD" in this slot with the Braves and Phillies set to play six more times in the second half of September, three in Atlanta and three at Citizens Bank Park. It is encouraging at least that the Phillies averaged nearly five runs per game against the Braves' pitching staff, recording fewer than three runs only twice.

Both the Braves and Mets enter the fall relatively healthy all around while the Phillies are trying to regain key impact arms, like ace Zack Wheeler and relievers Zach Eflin and Seranthony Domínguez, who were both recently reinstated.

Also, for what it's worth, the Braves have out-scored the Mets head to head 76-67 this season but have lost nine of 16 games to them.

The case for the Cardinals:

The Cardinals are likely the best chance for the Phillies to advance to the division series (which would pit them against — what do you know — the NL East winner or the Dodgers). With an elite offense in St. Louis, the Phillies, somehow, were able to post a 2.95 ERA against them and shut them out three times.

Confidence from prior successes would certainly give the Phillies a perceived edge. They won the season series against the soon-to-be NL Central champs, but would the retiring Albert Pujols, playing in what could be his final games ever, give the Cardinals a boost the Phillies can't overcome?

From a pure numbers standpoint, the Cardinals are the desired playoff foe — but in order to face them the Phillies would need to relinquish their two-game lead for the second Wild Card spot to the Padres, and in doing so they'd likely become more catchable for the Brewers, which could make things stressful and dicey down the stretch. So from that standpoint, don't hope for the Cardinals.