They hit the road next to play Miami again and then a Braves squad now battling for the NL East with the Mets. 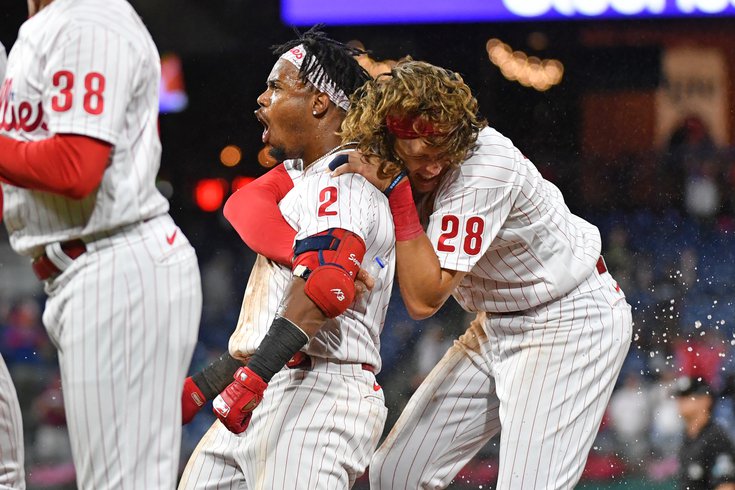 The Phillies' Jean Segura and Alec Bohm celebrate a walk-off win over the Marlins.

The Phillies took five of six in a pivotal homestand last week, bouncing back from a brutal West coast road trip while trying to solidify their position in the NL Wild Card race.

As of Monday, they're 78-62, 1.5 games up on the Padres for the second wild card spot and 3.5 games ahead of Milwaukee on the playoff bubble as the season enters its final stretch.

After winning two of three against Miami and sweeping the Nationals, there remains a clear path toward October for the Phils, but with the Marlins on deck again and the Braves two more times after, it isn't going to be the smoothest one.

But for now, where the Phillies stand...

Aaron Nola's history of late-season struggles looked to be rearing its ugly head again when Arizona tagged him for eight earned runs and knocked him out after four innings back on August 30.

There was A LOT that went wrong in that series with the Diamondbacks, but starting pitching ultimately sets the tone. It's never a good sign when the ace doesn't have it.

But boy, did Nola rebound to kick off the Marlins series.

He went 6.2 innings on Tuesday night, giving up just four hits and an earned run while striking out 10. He was back on the mound Sunday for the finale against the Nationals but was done after only two innings due to a lengthy three-and-a-half-hour rain delay.

With Zack Wheeler still trying to work his way back from forearm tendinitis, it's going to fall all on Nola to shut teams down at the top of the rotation. It's vital that his September struggles get left in the past.

Speaking of Tuesday night, the Marlins committed a grave sin.

With the game tied 2-2 in the bottom of the ninth with one out, Bryce Harper doubled off Miami reliever Tommy Nance to put the winning run in scoring position.

The Marlins chose to intentionally walk J.T. Realmuto and put him at first for the double-play opportunity, banking that Jean Segura would hit into it.

Segura took exception to that.

He lined one into right then launched his bat into orbit alongside Brett Myers' glove from '07 and Matt Stairs' NLCS home run from '08. Harper sprinted around third and slid home ahead of the throw to end it.

The Phillies won, 3-2, and Segura was still fully amped up in the walk-off celebration. The 32-year old has never experienced playoff baseball and it's evident he wants to change that, especially in what could be his last year in Philadelphia.

Before breaking his finger at the end of May, Segura was the Phillies' most reliable hitter not named Bryce Harper and was quietly performing as one of baseball's best second basemen.

Alec Bohm homered on Sunday and had an .882 OPS during the six-game homestand with two doubles, a triple, and five runs driven in.

Bryson Stott slashed .286/.375/.357, Nick Maton homered twice in spot starts off the bench, Matt Vierling hit .333, and Brandon Marsh finally looks to be getting settled in at the plate with a .286 average with a homer, a double, and an .857 OPS against Miami and Washington.

Bailey Falter also continues to look good toward the bottom of the rotation, holding the Marlins to two runs over 5.1 innings in Wednesday's 4-3 win.

With the exception of Bohm, who just turned 26, all the aforementioned players are 25 or younger, and if the club is finally going to break through to October, the "Phillies Daycare" is going to be big in helping them do it.

The road trip may not be necessarily make-or-break, but it's hard to imagine that another bad one leaves the Phillies with much breathing room coming out of it.

The Phils have been pretty successful against the Marlins this season with a 10-6 record. Against the Braves though, they're 6-6, having last split a two-game series against them back at the beginning of August.

Since then, Atlanta has caught up to the Mets in the race for the NL East, so they'll definitely be going full tilt by the time the Phillies get to them. How the Phils hold up will say a lot.