Phillies pour on the runs, but drop series in Arizona 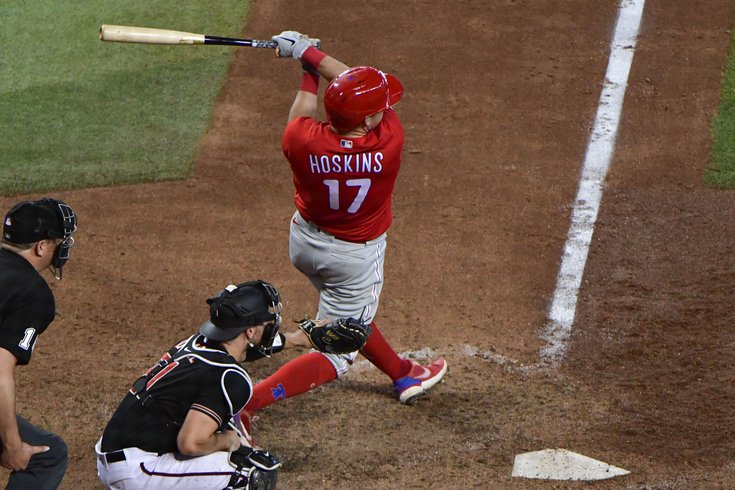 A whole lotta offense! The Phillies dropped two of three games to a Diamondbacks team seven games below .500 this week, but their bats were as alive as ever. The series loss should sting against an inferior opponent though. The Phils are just a half-game up on the Padres for the second Wild Card spot in the National League with the Brewers nipping at both of their heels.

Phillies fans' worries about the team's pitching, both starters and relievers, were validated this series. In their two losses against Arizona, the Fightins surrendered a combined 25 runs. Oof. The hitting is there, but the Phils' pitching will determine how far the squad goes in the postseason (if they make it at all!).

Some notes on the Phillies ahead of their Labor Day Weekend set in San Francisco...

One day after blowing a seven-run lead and losing 13-7, Aaron Nola stepped onto the mound for the Phils. It was a setup that should've inspired confidence for a quick rebound. It was the furthest thing from that. In just four innings of work on Tuesday, Nola allowed 10 hits and eight runs, putting the Phillies on a path to lose 12-3. Performances like that against substandard competition aren't going to cut it for a team hoping to snap the NL's longest playoff drought.

Nola still leads the majors in walks per nine innings and strikeout-to-walk ratio, but it will take the righty finding a gear he's never had to grasp before to anchor this rotation into October. In a Phillies rotation confidence meter story earlier in the week, our own Evan Macy said his confidence in Nola was an "8/10." I might skew lower on that one.

Meltdown in the Desert 🌵

Having won six of their last seven games, the Phillies came into their series with Arizona like a bat out of hell. The lineup built up a 7-0 lead on Monday after just four innings. As I said above, they lost 13-7. That can't happen if the Fightins truly believe themselves to be playoff contenders. Cristopher Sanchez allowing five runs in less than a full inning of work is... something. Nine of those 13 runs were earned for the Phils' pitchers. No excuses.

IT'S THE WHOLE TEAM 🗣️

Credit to the Phillies' bats once again. After two faulty pitching performances, this lineup ensured that they scored enough runs that even this bullpen couldn't screw things up. The Phils ripped the D-Backs for 18 runs on Wednesday night, as Phils hitters reached base a total of 30 times. Credit goes to... well, everyone. What a great all-around performance:

It's encouraging to see the Phils rack up runs like that without having to rely on the long ball, as zero players homered despite how much power this lineup has. Scoring runs any way you can get them is obviously integral to any October success this team wants to have.

The Once and Future MVP 🏆

Bryce Harper's stat line since returning from a two-month absence last Friday: batting average of .381, on-base percentage of .500, slugging percentage of .476. That guy seems pretty good! Harper was on another MVP pace before going down with injuries earlier in 2022. I have a gut feeling 2021 won't be the last MVP award Harper grabs while wearing red pinstripes...

Headin' Out to San Francisco for the Labor Day Weekend Show 🎶

At 73-58, the Phillies will continue their West Coast trek on Friday night with a three-game series against the Giants. San Francisco and old friend Gabe Kapler are 61-68 and out of the playoff picture.

Here are the probable pitchers for the series: