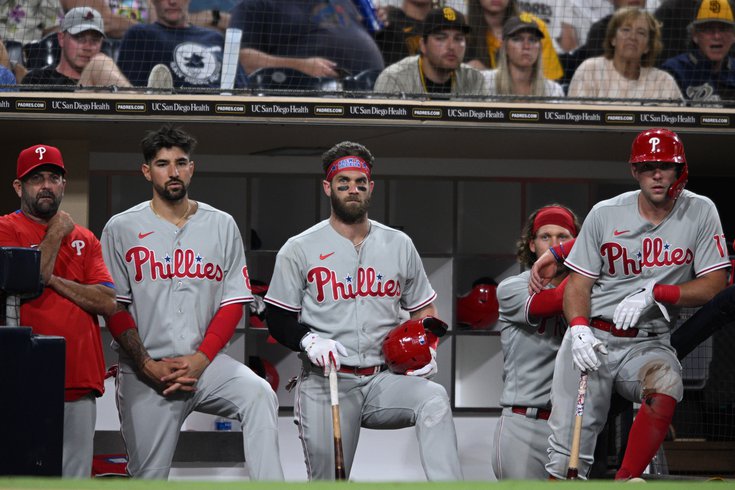 Bryce Harper is finally back in the Phillies' lineup.

The lineup's been posted. Bryce Harper's return has been made official.

Harper will be batting cleanup as the designated hitter when the Phillies open up their series against the visiting Pittsburgh Pirates at 7:05 on Friday.

Infielder Yairo Munoz has been optioned to Triple-A Lehigh Valley to make room for Harper on the active roster. Outfielder Simon Muzziotti was recalled and then moved to the 60-day injured list with partial tear in his right patellar tendon (knee), per the club.

It'll be Harper's first game since June 25 when he suffered a broken left thumb after an errant pitch from San Diego's Blake Snell caught him high and inside.

At the time, it spelled doom for the Phillies' postseason hopes as they would have to go the long haul without their top hitter in the lineup – and this was with Jean Segura already sidelined with a broken finger as well.

But the Phillies managed, going 32-20 since to stay well within the postseason hunt at 70-55 overall. After completing a four-game sweep of the Reds on Thursday, they have a 2.5-game lead over San Diego for the second NL Wild Card spot.

All the while, Harper was recovering and trying to work his way back. He began his rehab assignment with Triple-A Lehigh Valley earlier this week, but after two excellent games (he homered twice for the IrongPigs on Tuesday then doubled twice on Wednesday), he and the Phillies opted to speed things up and get him back in the fold ahead of the original September 1 return date.

"Bring him up," Segura said after the Phillies caught wind of Harper's performance down in the minors on Tuesday night. "He doesn't need any more at-bats, he's ready."

The rest of the club agreed as interim manager Rob Thomson announced ahead of Thursday night's game that Harper would be returning to Philadelphia and be activated by the Phillies on Friday.

Now the reigning NL MVP is officially back to help the team make its final push toward the postseason, with the end of a decade-long playoff drought on the line.

No doubt will Citizens Bank Park be buzzing on Friday night.