Phillies will activate Bryce Harper on Friday for Pirates series

Harper is on his way back to Philadelphia after two spectacular rehab games up in Allentown. 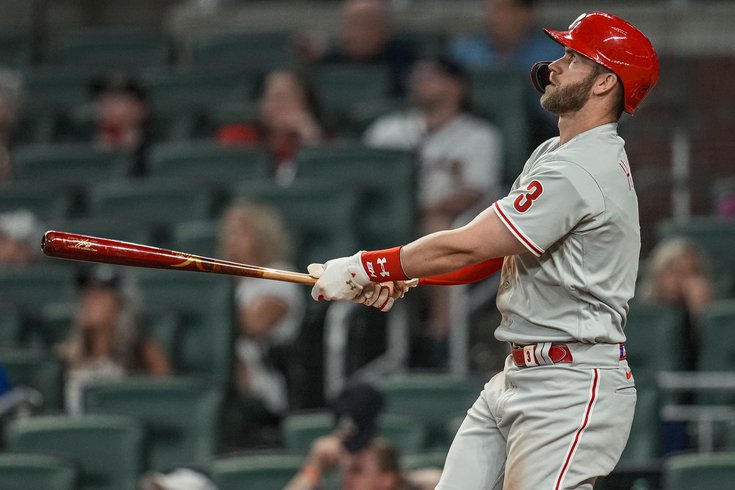 Bryce Harper will return to the Phillies ahead of schedule.

Bryce Harper will return to Philadelphia and be activated Friday for the Phillies' three-game set against the Pittsburgh Pirates this weekend, interim manager Rob Thomson announced prior to Thursday night's series finale against the Cincinnati Reds.

Harper, the club's top hitter and the reigning NL MVP, was on a rehab assignment with Triple-A Lehigh Valley to make his way back from a broken left thumb suffered on June 25.

But with the assignment going extremely well just two nights in – two homers in the first game on Tuesday then two doubles, including a walk-off, in the second on Wednesday – the possibility for Harper and the Phillies to speed up the return was out there.

“A possibility, yeah,” interim manager Rob Thomson told MLB.com's Todd Zolecki on Wednesday. “It just depends on how he feels. But that was pretty impressive [Tuesday] night.”

He's feeling great, it seems, though maybe a bit sore after not having played in nearly two months.

Still, he's seeing the ball well based on his now very short stint in the minors, and the Phillies will be getting their best bat back ahead of schedule as they continue their push toward the postseason.

Harper, who also has a small UCL tear in his right elbow that has kept him exclusively as a designated hitter since May, was slashing a monstrous .318/.385/.599 with 15 home runs, 21 doubles, and 48 RBIs before a pitch from San Diego's Blake Snell caught his hand high and inside.

At the time, the Phillies had finally turned a corner after a rough April and May to begin the season, which resulted in the firing of manager Joe Girardi. But the loss of Harper and his production at the plate was a devasting blow to the team, one that could have potentially ended its October-or-bust aspirations.

They managed though, going 31-20 since to stay well within the postseason chase, with the likes of Alec Bohm, Rhys Hoskins, Nick Castellanos, Kyle Schwarber, and of late, Bryson Stott picking up the offensive slack.

Heading into Thursday night, the Phillies are 69-55 with a two-game lead over the San Diego Padres for NL's second Wild Card spot, and they'll be looking to complete a four-game sweep of the Reds to bolster their standing.

Harper's thumb required surgery to repair, but he vowed to return this season and began taking batting practice a couple of weeks ago in the build to up to his Triple-A rehab assignment.

The original plan up in Allentown was for Harper to take at-bats Tuesday-Saturday during the IronPigs' series against the Braves-affiliated Gwinnett, rest on Sunday, then lock in a return date, which was expected to be when the Phillies leave for Arizona on August 29.

But then the first two rehab games went as well as they did and everyone took notice.

"Bring him up," second baseman Jean Segura said after the Phillies' 7-6 win over the Reds on Tuesday (via Corey Seidman at NBC Sports Philly). "He doesn't need any more at-bats, he's ready."

He was echoing the sentiments of just about every Philadelphian, especially with the Pirates up next, who might be the best team for a player to go against while they ease back into the majors – They aren't exactly MLB's fiercest competition.

MLB Network's Jon Morosi, on the air and then later on Twitter, reported Thursday morning that Harper could be added to the Phillies' active roster within the next couple of days.

A few hours later, NBC Sports Philadelphia's Jim Salisbury reported that Harper was taking Thursday night off, which wasn't surprising in isolation – Harper did say Tuesday that he would be taking his time and using an off day if he needed it while in Triple-A – but the timing only made it all the more curious.

Then Thomson finally confirmed that Harper will be back on Friday, just in time for the final stretch in September.

While Harper's coming back from Lehigh Valley, Brandon Marsh made his way up there.

Per The Philadelphia Inquirer's Alex Coffey, Marsh will DH for the IronPigs Thursday night, play the outfield on Friday, then possibly return to the Phillies on Saturday.

Brandon Marsh will DH in Lehigh Valley tonight. He'll play the outfield tomorrow and could possibly return to the Phillies on Saturday.

Marsh, who was acquired from the Angels at the trade deadline to shore up the Phillies' defense in center field, took a nasty fall trying to rob a home run during last Tuesday's 11-4 win at Cincinnati.

The ball sailed well over Marsh's glove, then his left knee buckled underneath him when he came down and collapsed to the ground. He was tended to by trainers and teammates but walked off the field under his own power.

He was placed on the 10-day injured list the next day with a bone bruise in his left knee and a sprained left ankle.

To fill the gap in the short-term, the Phillies claimed Bradley Zimmer off waivers from Toronto, but getting Marsh back will be a key defensive return for the club in the final month of the season.

Guess it couldn't be all good news, couldn't it?

Harper's coming back, Marsh is working his way back, but righthander Zack Wheeler is going on the 15-day injured list retroactive to August 22 with right forearm tendinitis.

The Phillies have placed RHP Zack Wheeler on the 15-day IL (retro 8/22) with right forearm tendinitis.

Alongside Aaron Nola, Wheeler has been vital at the top of the Phillies' starting rotation with an 11-7 record and a 3.07 ERA. But he was hit around in his last two starts, both against the Mets.

On August 14 up in Queens, Wheeler was tagged for all six of the Mets' runs in a 6-0 Phillies loss.

Then on August 20 back at Citizens Bank Park, the first game of a doubleheader, he surrendered four earned runs across 5.1 innings in an 8-2 defeat.

Friday's series opener against Pittsburgh was supposed to be Wheeler's turn in the rotation, but now spot starter Bailey Falter (1-3, 4.40 ERA) is slated to take the mound in his place.