It's only a rehab stint, but then again, it's rare for one of the biggest names in baseball to come through Allentown 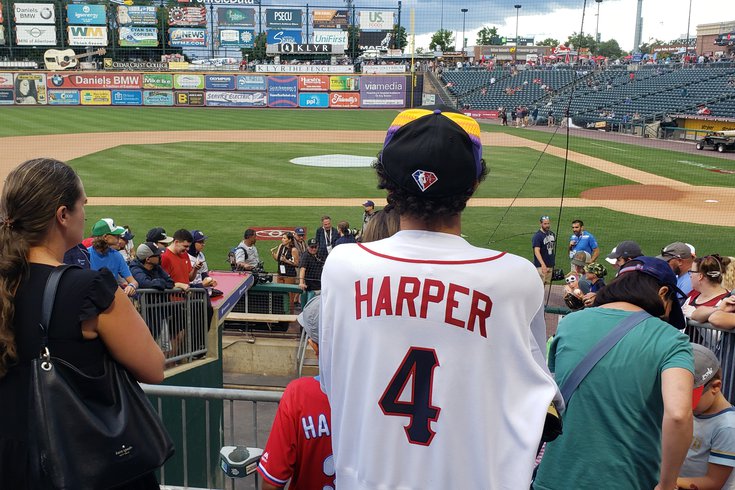 Landon Rosato of Slatington waits for Bryce Harper and the IronPigs to emerge from the tunnel prior to Tuesday night's game in Allentown.

It isn't often that one of the biggest names in baseball comes back through the minor leagues, much less the Lehigh Valley, and even though it's only for a rehab assignment, the IronPigs and their fans are embracing Bryce Harper's brief stay for everything it is.

"You hear Bryce Harper's in town, it's this close. You can't not come," said Landon Rosato, who was one of the many fans waiting for Harper to emerge from the third base tunnel pregame. "You don't have to go all the way down to Philly, it's just right here in the Lehigh Valley."

Rosato made the roughly half-hour drive in from Slatington to see the Phillies superstar – the trip to Citizens Bank Park is nearly triple that – and when he arrived, he went right to the team store to pick up a newly pressed No. 4 Harper jersey.

The shop was stocked up. They moved quick.

"It's really amazing. Not a lot of huge stars like this come to the Lehigh Valley, so when a huge star like Bryce Harper comes here, it's truly an honor and a huge opportunity for this stadium," said Brittany Soriano out of Bethlehem, who carried a sign welcoming Harper to Allentown.

Soriano usually makes it out to around 10-15 IronPigs games every season and regardless of the roster, the trip to the ballpark is always a good time, she said.

But having any of the big-name Phillies come through is always a nice bonus too.

"Coming to the IronPigs game is fantastic, it's so much fun," said Greg Calucci, who made the quick 20-minute drive in from Phillipsburg, New Jersey. "It's a bonus when you get to see these guys from the Phillies come down here and play, but the IronPigs always draw a good crowd, we always have regulars that come here, and it's so enjoyable to come here."

That said, Tuesday night was all about Harper.

Calucci's son Dante stood by the IronPigs' dugout before the first pitch hoping to get an autograph. Calucci, meanwhile, hung by the first-row fence with a wager.

A couple of weeks ago, he and Dante were in attendance for one of the games during Jean Segura's rehab assignment from a broken finger. The Phillies second baseman crushed a home run off of the "Giant" sign in deep left field.

"So when Harper comes out, I'm gonna bust his chops and tell him 'Listen, your buddy Segura hit the Giant Food sign," Calucci said. "'I need you to hit one out of the ballpark and knock one over the PenTeleData sign [in right].' We'll see what he says."

Harper didn't get it over the sign, but in his first plate appearance since suffering a broken left thumb on June 25, he launched one straight into the right-field concourse.

Calucci said he bet his son $5 that Harper wouldn't hit a home run that night. That's five bucks for Dante.

Later on the eighth, making an extra trip to the plate beyond his expected four, Harper homered again, launching a three-run shot to the opposite field in left.

It fell short of the "Giant" sign, but put the sellout crowd of 10,100 on its feet nonetheless.

"Really cool," Harper said of the crowd Tuesday night. "Last time I was here was in '12, I think. It was my second-to-last series before I went up [to the majors]. It was great being back. Of course, I don't want to be here all the time, but just excited to be down here playing, getting ready.

"And the fans were great. The ballpark's awesome and the atmosphere was great. A lot of fun."

The reigning National League MVP continues to make waves in Allentown, hitting a two-run, walk-off double for an IronPigs win on Wednesday night too:

Harper goes 3 for 5 tonight with a pair of doubles pic.twitter.com/Qb9UF8htDh

Harper is expected to take at-bats throughout the IronPigs' series against Braves-affiliated Gwinnett through Saturday. He'll rest on Sunday, then he and the Phillies will figure out the official return date as they continue their push for a postseason spot.

In the meantime, the Lehigh Valley will enjoy Harper for as long as they have him, and Rosato, an avid jersey collector who said his new IronPigs No. 4 jersey is within his top 10 right now, will appreciate having a rarity looking back.