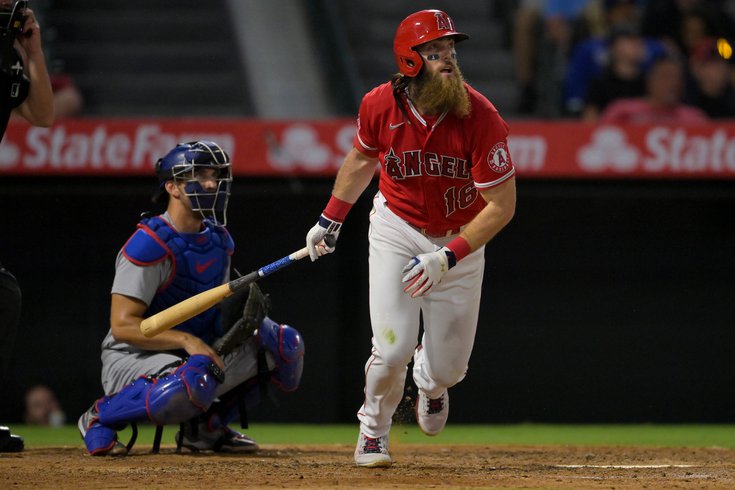 The Phillies look to be addressing their biggest needs with the trade deadline inching closer. According to reports, they're moving catching prospect Logan O'Hoppe (the No. 3 player on the farm) for 24-year-old outfielder Brandon Marsh.

Best known for his fielding prowess — a feature that no doubt appeals to the Phillies — Marsh brings with him a dubious bat with a .239 batting average over 163 games in his career with the Angels, along with 10 homers and 56 RBI. He did however, hit .288 over his four seasons in the minors, including a .300/.384/.428 stretch over 92 games in Double-A.

He also has a 0.6 defensive WAR, via Baseball Reference, the second best on the Angels roster.

A former second round pick, Marsh has played every outfield spot for Los Angeles, and over two seasons he's literally hit in every batting slot from one-to-nine. He has a .267 average in the leadoff role in 21 games and is under team control until at least 2025 having made his MLB debut in 2021.

The deal is done, by the way. It's straight up. Phillies believe they have filled their CF hole for 2022 and beyond. They had discussed O'Hoppe in other prospect-for-prospect trades -- had also attempted to use O'Hoppe as centerpiece for controllable SP. No go.

It's a savvy move, acquiring such a young player who was previously the No. 32 ranked prospect in baseball prior to the 2021 season. Phillies backstop O'Hoppe played in the MLB futures game a few weeks ago but has always been hamstrung by playing catcher, stuck behind J.T. Realmuto among others.

O'Hoppe is 22 and flashed a good bat and some power in the minors this season, but was always going to be one of their best available trade chips. Getting someone who can pan out to be a longterm contributor in a position of need one-for-one could prove to be one of Dave Dombrowski's best moves with the Phillies.