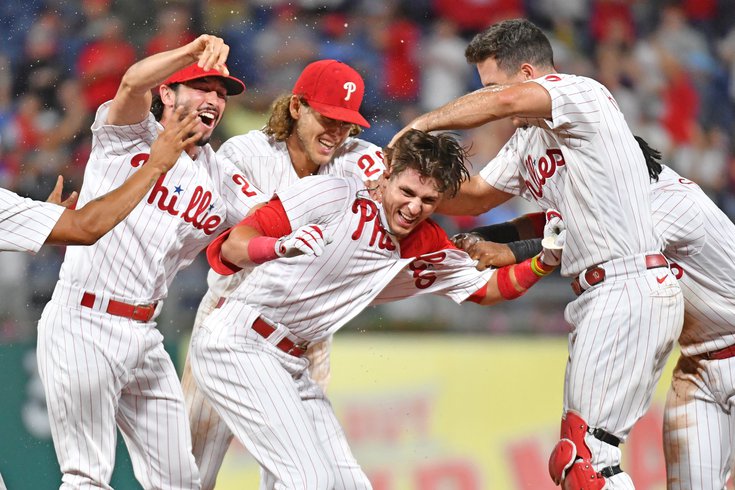 The Phillies are riding high after a sweep of the lowly Reds.

By now you know the headlines. The Phillies won four in a row against the Reds, lost Zack Wheeler to a minor injury and will be gaining Bryce Harper, who positively mashed the ball in two rehab starts in Lehigh Valley.

As we do after each series, let's single out some of the most noteworthy and interesting things we noticed as the Phils start to (perhaps) separate themselves on their mission to end the second-longest postseason drought in baseball:

• The Phils are comfortably in the driver's seat right now for a playoff berth and if the playoffs began today, they would play the Braves in Atlanta to kick off a three-game wild card set of games. With the Braves right on the heels of the Mets for the NL East crown, the Phillies could find themselves playing the Mets in Queens instead — a team they have struggled mightily against this season. That's a worry for another day though, as the hits keep coming for the Phils...

• Checking in on the offensive numbers for the Phillies — who welcome back the reigning NL MVP Friday — things are pretty encouraging.

We could add more stats but the picture is pretty clear — with six playoff spots the Phillies' offense has them in the fifth seed based on basically the fifth-best hitting in the National League.

• Against the Reds, most of the regulars got at least one day off during the four-game set but there were some standouts, including J.T. Realmuto, who went 6-for-12 in three games with four RBI. Alec Bohm was also impressive in the series, collecting five hits in 11 at-bats with two RBI himself.

The Phils had 37 hits (to the Reds' 29) which is a pretty potent clip for a baseball team over a four-game stretch.

• It's really the pitching that deserves recognition for the sweep in this one. In Thursday's finale, Aaron Nola had one of his best games ever as a pro, posting a complete game shutout while striking out 11 and allowing just five hits.

“My God, Aaron Nola is really good at pitching,” Phillies backup catcher Garrett Stubbs said (via NBCSP) Thursday night. “That guy is unbelievable. That was so much fun. Around the league, Aaron is known for his curveball, but tonight he had more than just a curveball and that’s probably a big reason he got to complete the game. When you have to think about more than one pitch – and for him, if you’re thinking about the curveball all the time, he can still throw it because it’s that good – but tonight they had to think about everything so that makes for kind of a video game back there.”

Cristopher Sanchez made a spot start the night prior, and pitched six solid innings before handing it over to a combination of four relievers who held onto the Phillies' lead. And in the series opener, Noah Syndergaard did a fantastic job through his seven innings in the 4-1 win.

The anomaly was Game 2, a battle that saw the Phillies give up the lead several times after a strong start by Ranger Suárez eventually saw him roughed up in the middle innings. The offense lifted the pitching in that one, thanks to Bryson Stott's game-tying pinch-hit RBI double and Nick Maton's pinch-hit walk-off single in the ninth.

We looked at the team's decent hitting stats, now here's a quick look at how they've been pitching:

Just like in hitting, the Phillies hurlers are right in the top of the middle in nearly every stat — though Baseball Reference does give them the best pitching WAR in all of baseball.

• The Phillies are in the midst of an exceptionally easy stretch in their schedule, as they'll welcome the Pirates to town for a trio of games this weekend. Bailey Falter, Kyle Gibson and Syndergaard will get starts at what should be a jam-packed Citizens Bank Park for Harper's return.

Following their series against the lowly Pirates, Philadelphia will have five consecutive series against teams below .500, beginning with a road trip to Arizona and then to San Francisco next week.