The 2022 postseason schedule was also released 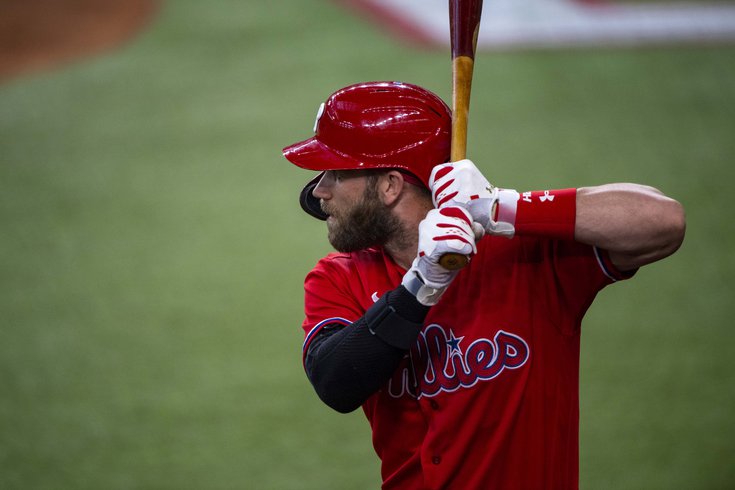 Bryce Harper at bat during the series at Texas back on June 22.

Suffice to say, the weekend series against the Mets didn't go as planned for the Phillies.

But Monday brought good news: Bryce Harper has begun taking live batting practice and may not be much further off.

Harper, who said at the start of August that he was eyeing a "September-ish" return from a broken thumb, posted a quick video of Monday's BP in an empty Citizens Bank Park to his Instagram story.

Then Phillies president Dave Dombrowski made an appearance on MLB Network's High Heat, praising Harper's progress and noting that "September-ish" very well could mean September 1 at this rate.

"Bryce has made great progress, and today is the first day he's hitting on the field, so we feel really good about that," Dombrowski said. "He's done very well with the recovery. Now it's really up to him. He's been cleared as far as participation is concerned, so he's out there just working his way back up.

"So when you say September 1, I think that's a realistic goal."

Harper has been out since June 25 after a pitch from San Diego's Blake Snell rode inside and caught his left thumb, resulting in an injury that required surgery to repair and weeks to recover from.

It was a devastating blow to the Phils, who would have to go the long haul without their best hitter and the reigning NL MVP, and even though they've more than managed to stay within the playoff race since, this weekend's series against NL East-leading New York proved that they still very much need him in the lineup.

Kyle Schwarber too, who has been day-to-day with a mild right calf strain.

The Phillies, at 63-51, entered Monday night with the NL's third wild card spot, trailing San Diego in second by half a game. They're set to open a three-game series on the road against a struggling Cincinnati Reds squad before returning home to Citizens Bank Park for a four-game rematch against the Mets this weekend.

There's a lot of ground the Phils can potentially capture in their postseason push over the next few days, and it'll be huge if they can carry momentum into September only to get Harper back for the final month.

When Harper does return though, it'll continue to be exclusively as a designated hitter.

Also suffering from a small UCL tear in his throwing arm, Harper did resume his throwing program earlier this month and had hope that he might be able to return to right field, but the Phillies dialed it back after he experienced stiffness in his elbow and had a setback in regaining flexibility in the broken thumb.

Speaking of a postseason push...

Major League Baseball released the 2022 postseason schedule on Monday, and while we don't want to get too ahead of ourselves, it does offer up a glimpse into when the Phillies could be playing provided they do in fact make it to October.

Assuming they finish as one of the wild cards, here's what the schedule would be for either of the best-of-three wild-card series via NBC10's John Clark:

If the Phillies hang on to one of the wildcard spots, this is when they would play in October pic.twitter.com/NzPLcqD4AB

MLB expanded the playoff field from 10 teams to 12 starting with this season, adding an extra wild card to each league.

You can see the full postseason schedule HERE and a breakdown of the new format HERE.

The Phillies are moving ahead with their two top pitching prospects and doing so quickly.

Righthanders Mick Abel, 20, and Andrew Painter, 19, have been promoted to Double-A Reading and are expected to make their first starts Saturday and Sunday, respectively, per The Philadelphia Inquirer's Scott Lauber.

This puts all three of the Phillies' top pitching prospects – Abel, Painter, and 23-year old righthander Griff McGarry – back in the same spot with one another.

Abel, the club's first-round pick in 2020, started 18 games with High-A Jersey Shore, going 7-8 with a 4.01 ERA and a 1.32 WHIP. While not an overly impressive line, at 85.1 innings pitched, he did prove that he can pitch deep into games, which was enough for the Phillies to keep the process moving.

Painter did the same, though in a smaller sample size but at a much more dominant rate. In eight starts, Painter went 3-0 with a minuscule 0.98 ERA and a 0.87 WHIP, going no less than six innings in his last three starts.

At the trade deadline, Dombrowski said that Abel, Painter and McGarry were names that he couldn't get clubs off, but all three are still here and look to be a part of the organization for the long haul.