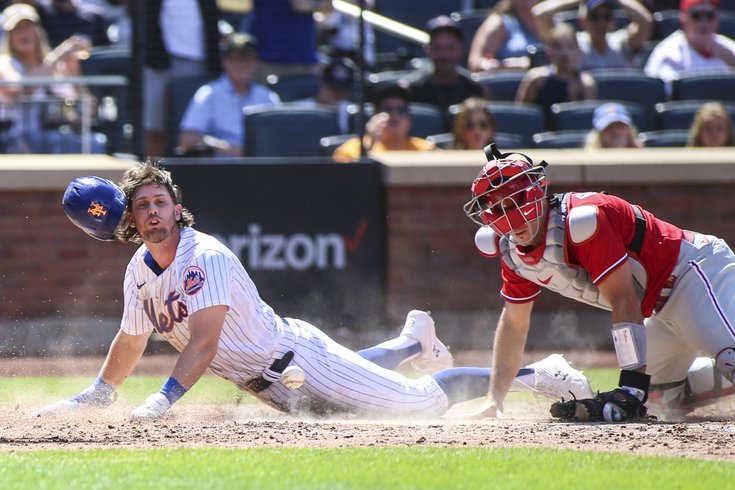 J.T. Realmuto is unable to hold onto the ball and prevent a Mets run.

Frustration mounts. It's been an unlikely rise for the Phillies this summer, making noise in the National League Wild Card race and trying to steal the limelight in the city's sports scene. The Fightins had won 12 of their previous 14 games heading into Citi Field with a weekend set against the first-place Mets. This was an opportunity for the team to properly illustrate that the Phils are officially back.

That didn't come to fruition. The Phils dropped two of three games to the boys from Queens, scoring just two run across the series.

Some notes on the Phillies after the disappointment in New York and ahead of their matchup with the Reds on Monday night...

Anytime you're in the company of Travis Lee, Rob Ducey and Tomas Perez, something has gone terribly, terribly wrong.

Not just surviving, but thriving without Bryce Harper in the lineup has been miraculous. Surviving without both Harper and Kyle Schwarber looks impossible so far. For an offense that was built to withstand slumps and missed time, the Phillies couldn't do that in the most hyped series in a decade.

Zack Wheeler, having a season that rivals his 2021 campaign where he finished as the NL Cy Young runner-up, imploded on Sunday. In six innings of work, Wheeler surrendered six runs and nine hits.

It makes sense to step back and view this through the lens of a one-game sample size. That's rational, but it's devoid of all context. The closer and closer the Phillies get to October, the notion of looking at things from a macro level goes away. It's not about being analytically logical at that point. It's about winning games and doing something this organization hasn't done since I was a senior in high school.

The Phillies did win one game in this series, an extra innings W on Friday night. This throw from Matt Vierling to gun a Mets runner out at the plate was gigantic and, in retrospect, staved off a sweep:

The Cavalry Is Coming 🐎

Good news for the Phillies:

They need Harper back ASAP to keep this run going.

The Phils will look to rebound from the setback in Queens with a three-game series this week in Cincinnati. The Reds are 45-68 this season. With the Phillies just a half-game behind the Padres for the second Wild Card spot in the NL and only 1.5 games ahead of the Brewers for the final playoff spot, a quick turnaround is a necessity.

Here are the probable pitchers for the series: