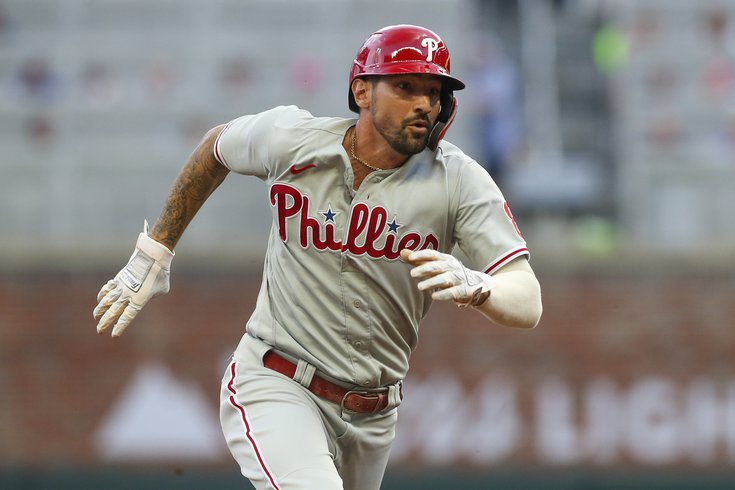 The Phillies' two-game series in Atlanta, spanning Tuesday evening to Wednesday afternoon, was a bit of an awkward place holding a pair of baseball games.

The team that arrived in Georgia Tuesday morning is not the same one that will be taking the field in Philadelphia this coming weekend. After a bevy of trade deadline acquisitions meant to help the team keep its hold on the last playoff spot in the National League, reinforcements are on the way.

As we do with every series, we'll lay out some observations we had over the series split, with a lens toward the future as the season is about to get interesting.

• We'll start with the aforementioned acquisitions. Noah Syndergaard — who was acquired in exchange for Mickey Moniak and one of the team's young pitching prospects — is expected to make his team debut against the Nationals Thursday. Brandon Marsh will be with the team and likely starting in center Thursday as well. And finally, Jean Segura, who spent the last week in Triple-A, will be available and probably starting at second base or shortstop.

David Robertson was in Atlanta and got the ball in the ninth, earning a save in a perfect frame. Bryce Harper, who started his physical rehab this week is a few weeks away.

• As for the team's performance against the Braves, it was ugly at times, as the team suffered a 13-1 loss in the opener due in large part to them not having a starting pitcher slated to go. The bullpen game didn't go particularly well, as the unit bucked a recent trend of solid pitching and was rocked, with Corey Knebel (five), Nick Nelson (two) and Francisco Morales (four) each giving up multiple runs in relief. The pen gave up eight RBI with two outs, which is certainly something the team hopes is just an anomaly.

• A name not talked about much is Darick Hall, the minor league journeyman who was called up to lend his power bat to the Phillies DH slot. He went 3-for-6 in the two-game set against the Braves, once again reminding us that he does not want to be sent back down when Harper makes his return. He's played just 11 innings in the field in the majors, all at first base, but he may see more time there in the future if he winds up keeping his 26-man roster spot.

• Zack Wheeler was the star in Game 2, as the ace tossed seven stellar innings in a pitcher's duel against Charlie Morton that didn't see a run scored until the Phils ace relented a solo shot to Orlando Arcia in the fifth. Wheeler would strike out seven in his efficient outing and earn the win thanks to some heroics from Nick Castellanos...

• This is why they paid him the big bucks:

For the lead!! #RingTheBell pic.twitter.com/JlrqgkwOOr

He's been slumping, he's had a power outage, and he's rifted with media members, but on Wednesday he blasted the go-ahead homer (following a game-tying groundout) to put the Phils ahead. It was his first homer since June 30. The bullpen got a chance to redeem itself after Tuesday, with Seranthony Dominguez and Jose Alvarado earning the 8th inning hold and Robertson a successful first save.

• As we hinted at earlier, the Phillies will be back at the Bank for a four-game set against the last-place Nationals — who lost their two best hitters at the trade deadline and should be all but a pushover. Syndergaard will open things with Kyle Gibson, Ranger Suarez and Aaron Nola to follow.

After a second consecutive Monday off, the Phils will host the fourth-place Marlins for a trio of games. Their next two series should help them pad their playoff positioning.