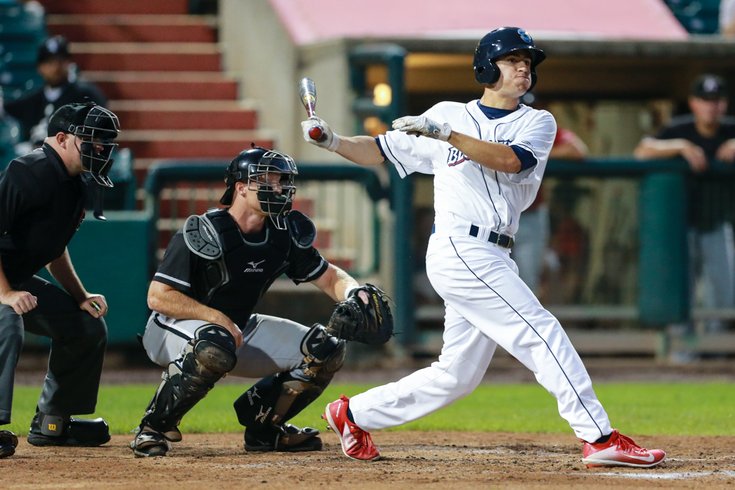 The Phillies have come back to earth after one of baseball's best starts, as the team has struggled mightily against top NL teams like the Dodgers, Cubs and Brewers of late.

As Phils' fans have done for the last six seasons, looking for a bright spot in the farm system is about par for the course this time of year.

Here's a brief look at each of the Phillies current top 10 prospects — as identified by MLB.com — and how they have fared recently as the minor league All-Star break approaches:

The 23rd best prospect in baseball is Sanchez, and the 19-year-old continues to impress even at low-level minor league ball. He is 4-3 with a 2.51 ERA in eight appearances thus far this season, but has been put on the seven-day disabled list due to elbow inflammation as a precautionary measure. He should be back sometime this month.

Another youngster playing in Florida, Medina has gotten the run support to boast a 6-2 record despite a 4.82 ERA. Even so, his strikeout to walk ratio is high — 40-to-17 — and he has been hot lately, allowing just three runs in his last three starts (17 innings).

The hotbed for Phils prospects in Clearwater should excite fans even further as last year's eighth overall pick has found his swing of late. He is hitting .364 over his last 10 games to lift his season batting average 18 points to .298. If his hitting continues like this, the 22-year-old could find himself in Reading before the season concludes.

The Threshers also are home to the first overall pick from 2016 who has struggled mightily early in his professional career. Like Haseley, however, the outfielder has caught fire batting .359 over his last ten games (he had been mired in a slump at the .224 mark on the season prior to his recent success).

At just 19-years-old, Ortiz has also been heating up with the arrival of summer in Jersey, as the Blueclaw's outfielder is hitting .364 since May 30th. Last Friday he went 4-for-4 against the Hickory Crawdads.

The Fightin's 21-year-old starter hasn't adjusted well to Double-A, as he has a 5.05 ERA through 12 starts this season. He's allowed at least three runs in three of his last four starts in Reading.

Kilome pitched reasonably well in Double-A last season but has hit a wall this season. He is 1-2 with a 4.77 ERA through 11 starts so far and has struggled against opposing hitters — hitting .274 against him this campaign.

Back to Clearwater we go, where the 20-year-old infielder is hitting nearly as impressively as his name is cool. Gamboa has hit at a .361 clip over the last 10 games and has a .273 average this season.

Suarez has a similar level of talent and skill to his teammate in Reading Romero, but has pitched better with a 3.27 ERA so far this season.

Much has been written about recent call up Domingez, who appears destined to eventually become the Phillies closer. The 23-year-old has a 1.13 ERA over 16 innings and has allowed just three hits during ins MLB tenure.