Phillies stay or go: Should Gabe Kapler, Rhys Hoskins, anyone from pitching staff return in 2020? 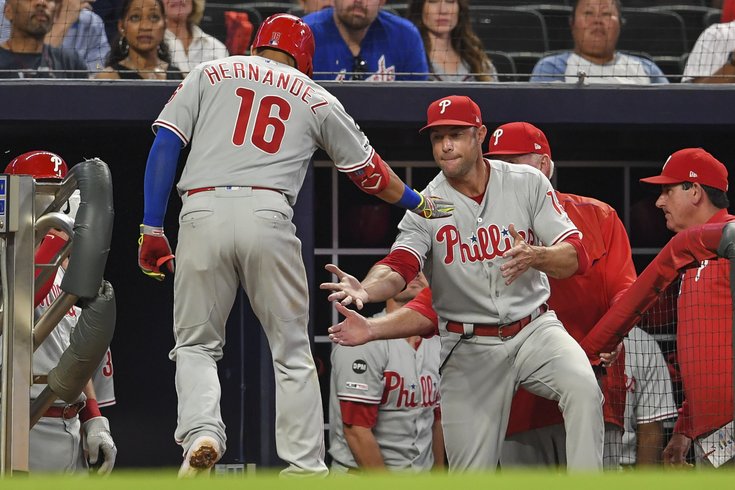 Gabe Kapler's future is in flux.

The Phillies 2019 season wasn't technically a collapse — they haven't been in first place since June 11 — but their failure to make the postseason after spending half a billion dollars this offseason is a disappointment to say the least.

On paper, a healthy Phillies roster looks like one that can contend for titles, but it would be a big under-reaction for John Middleton to decide simply to "run it back" for 2020. Some changes must be in order.

We will assume that it goes without saying that minor presences like Jose Pirela and Blake Parker are not worth pontificating over and we'll instead take a look at the players who were impactful this season, and whether the team should — in our estimation — bring them back.

GO: Pretty much every pitcher on the roster

The Phillies saw 11 pitchers start a game in 2019. Here is the ERA and WHIP for each of those pitchers:

Some context to consider. The MLB average of all starting pitchers this season was a 4.55 ERA and 1.32 WHIP (walks plus hits per innings pitched). The Phillies had just one pitcher, Nola, exceed the averages in both categories. Think about that for a minute. Other than Nola, who pitched dreadfully down the stretch himself, the Phillies did not have a single other starting pitcher better than a replacement level arm.

From a practicality perspective, Arrieta has a $20 million option he will surely pick up next season while Vargas has a team option for $8 million that they will surely decline. Eflin, Pivetta, Velqsquez and Eickhoff are all under team control.

This is all a complicated way to say, the Phillies need to build a new pitching staff next season, except for...

In his last six starts, Nola is 0-3 with a 5.56 ERA. He still is the best pitcher on the Phillies by a wide margin. Nola is 26 and is not going anywhere, after nearly winning the 2018 Cy Young award. He is also under contract through 2023.

That was a mouthful.

When they piece together a 'pen for next season, going young is a smart move. Neris, Suarez and Dominguez are all good bets to be back in the pen in 2020 (assuming Dominguez doesn't wind up getting Tommy John surgery). Aside from that trio, there is a mess to weed through as 34 different pitchers (including Roman Quinn, Rodriguez and Aaron Altherr) took the mound this past season.

Not much needs to be said about Realmuto. He's lived up to the billing as one of the best catchers in baseball. He's been an innings eater behind the plate while hitting for average and power. He's also been absolutely incredible defensively, catching 43 base runners (with the next best catcher at just 27). A free agent this winter, he may become the highest paid catcher in history over the offseason and he'll deserve it.

Hoskins has been... a disappointment. He's fallen off a cliff in the second half of the season:

The rumor mill is already churning that he may be trade bait for a pitcher this coming offseason. However, needing stability at first base, I believe he will be back for one more go of it.

He is still just 26 and with the chops he showed early in the year and in 2018, his trade value may be high under team control through 2021. It's a toss up really.

There is nothing particularly bad about Hernandez — he is just nothing special. And with some infield talent in the farm system, the Phillies need to open some roster slots. They also need to get Scott Kingery playing every day (more on that later). Hernandez is under contract next year, technically, with an arbitration eligible season. If Philly can find a way to move him this offseason they might get a nice return.

Franco, like Hernandez, is a young infielder under arbitration control (for two years) but his time in Philly is numbered. A demotion this summer didn't do much to improve things and he seems like he could do with a change of scenery. At the same time, in addition to Scott Kingery having a stellar season and needing a regular home, the Phillies are also soon going to need a spot for top prospect Alec Bohm. With the outfield (hopefully) set next season, moving Franco and Hernandez to create an everyday spots for Kingery and Bohm is a no brainer.

Segura is locked up until at least 2022, so the Phillies are likely to stick with the player who is probably their best pure hitter. But he's played worse than expected in 2019:

We haven't talked much about Jean Segura's huge drop-off this year, but it's been a killer.

It would be really hard to argue that Harper wasn't worth the $25 million the Phillies paid him this year. He led the team in homers and RBI (his 109 RBI so far are a career high), plays a very solid right field leading the majors with 13 outfield assists (tying a career high) and always hustles. He may strike out a bit more than is desired but Year 1 of Harper in Philly — you know, aside from the team stinking — was a success.

Cutch led the majors in walks and was putting together a stellar offensive campaign before he blew out his knee in June and was forced to miss over 100 games because of it. His absence, paired with Odubel Herrera's sexual assault issues set in motion a confluence of events that wound up sending the Phillies into the depths of misery in the outfield. It also gave the Phillies pretty much no reliable leadoff hitter for the rest of the season. The Phillies will be very glad to have Cutch back in the fold in 2020.

First Kingery, who is pretty much everything you want in a young versatile baseball player. He can hit from anywhere in the lineup. He has a little bit of pop (19 homers). He can play almost every position on defense. The Phillies struck gold last year when they broke convention extending Kingery before he played a major league game. He needs to be in the lineup every day in 2020.

As for Haseley, I think he's pretty much proven he is the every day centerfielder. He has made a few rookie mistakes and had a couple injury hang ups, but it's nice to see that (at least for now) the Phillies made a good first-round choice for once.

Quinn just can't stay healthy or get on base enough to put his elite speed to use. There's a chance (he is under team control for the foreseeable future) that the 26-year-old returns as the team's fourth outfielder next season, but if he can be used as a trade chip for a pitcher, the Phils should throw him into a deal.

Miller, another bench player who made over 100 plate appearances, is a free agent at the end of the year. His bamboo didn't work long enough to stay either.

Bruce has another year left and is a nice big bat off the bench who can start a few games in a corner outfield spot (when healthy). He was a great, cheap acquisition this summer.

This trio of players will be finding new jobs for a variety of reasons. First Herrera, whose legal issues and suspension was one of the Phils' first chinks in the armor this year, should be sent packing. But it might not be that simple, according to our Paul Hagen:

Under terms of the 2015 Domestic Violence Policy, the Phillies can trade him. What they can’t do is release him because of that incident. They can, however, cut ties if they can make a compelling case that they’re doing so strictly for baseball reasons.

Rodriguez really didn't endear himself to fans this season and his roster spot will surely be used for a younger player.

And then Knapp, who despite having a few arbitration seasons ahead may have worn out his welcome in Philly after barely hitting above the Mendoza line this season.

And now, most definitely the reason you are reading this article: to vehemently disagree with whatever side I take on the Klentak/Kapler conundrum.

The situation is as follows. Klentak went out and put together a team that looked like a surefire competitor on paper, signing Harper, McCutchen, David Robertson and a few others — while also trading for Segura and Realmuto. The only problem is, he forgot the pitching staff. The Phils went into 2019 with a staff comprised of ace Nola, aging Jake Arrieta and a quartet of unproven starters with a makeshift bullpen behind them.

As we all know, the starters completely fell apart, the bullpen took out its own hospital wing and several key bats also had stints on the injured list this year.

Enter Kapler. Who did the best he could with the mostly unspectacular pitching staff while tinkering perhaps a bit too much with the lineup as a way to try and overcome the pitching's shortcomings.

Here's a bit from Hall of Fame Phillies writer Hagen on the matter:

1. It doesn’t matter what I think. In fact, the only factor that should be considered is whether whoever makes the final call – managing partner John Middleton, president Andy Mac Phail or Klentak – has gotten everything he could out of the players he was given. Everything else is eyewash. Without being around the team every day, without having access to what goes on behind closed doors, without the ability to solicit honest answers from players, it’s impossible for an outsider to get a grip on whether Kapler did or did not achieve that bottom line duty.

2. If the conclusion is that he didn’t, the fact that he has a year left on his contract shouldn’t keep the Phillies from making a change. And if the judgement is that he did, he should be extended. Because going into a season as a lame duck can only undermine a manager’s authority and that’s not fair to anybody.

There's a big difference between what WILL happen and what SHOULD happen. The squandered opportunity is probably enough to send either Kapler or Klentak packing (and this includes team president Andy MacPhail as well), but due to the nature of the failure, each will probably get one more season to show they can put a winning product on the field.

There, see — I answered the question without really answering it.