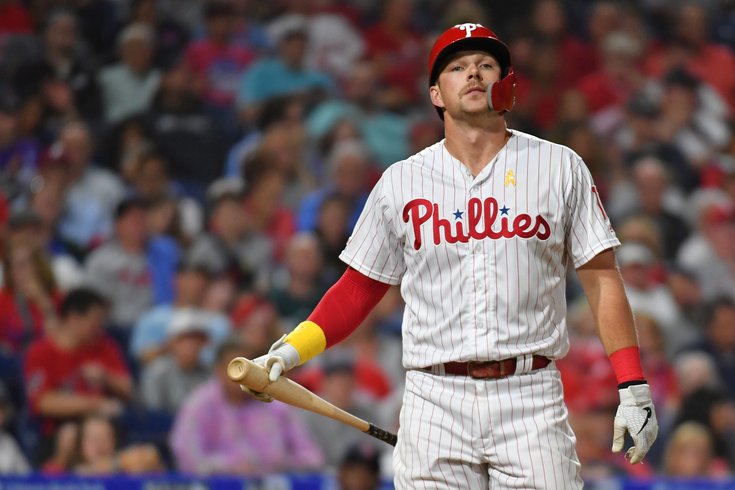 Rhys Hoskins, once considered a clear cornerstone player for the Phillies, could be playing to preserve his job at first base in 2021.

The Phillies were eliminated from playoff contention this afternoon, but that was a foregone conclusion after a miserable September.

The bigger news, it seems, came Tuesday afternoon from NBC Sports Philadelphia's Jim Salisbury, the most plugged-in Phillies beat writer in the city, who has some eye-catching rumblings on first baseman Rhys Hoskins' future in Philadelphia.

Here's what Salisbury had to say:

Yowza! That's a bit of a sharp left turn. Salisbury isn't out-and-out reporting this as "sources say the Phillies are going to shop Hoskins," so we shouldn't go crazy speculating that Hoskins will get dealt immediately. But Salisbury also doesn't go tossing out hypotheticals for no reason, meaning there are probably some legs to the idea.

But since the start of July, a frustrated Hoskins has been swinging at pitches with his eyes closed. He has just 28 RBI in his last 72 games, with an OPS below .750, and has struck out in 30% of his at-bats over that span.

Whether Hoskins still has a future with the Phillies, who clearly need to make some big changes after a staggeringly disappointing season, is unclear, an idea that would've seemed unconscionable back in early April. But time waits for no man, and baseball waits for no man to find his swing.