Who won the week in Philly sports: Rhys Hoskins rakes for the Phillies 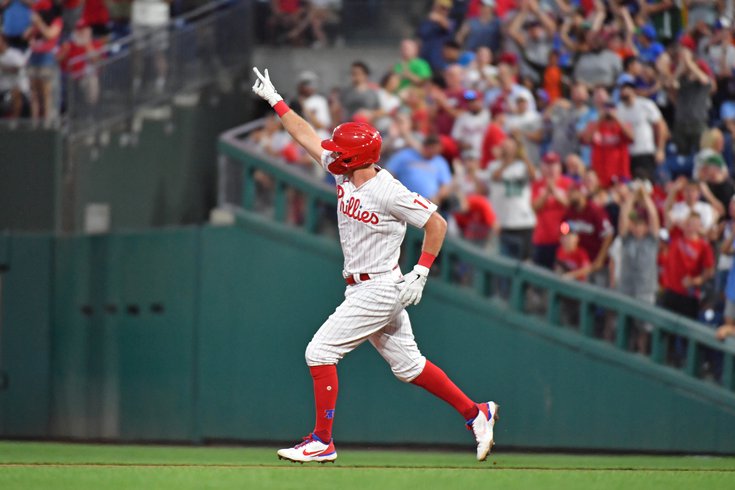 Rhys Hoskins rips one into the night.

Did I expect to be writing about the Phillies so heavily before the start of this MLB season? Yes. Did I expect to be writing about them this much as of last month? No, not under any circumstances. That's what the June Phillies have done to Philly though. Going 15-3 in their first 18 games this month, the Phils have thrilled with moonshots, clutch hits and extra inning wins.

The Phils are just 2.5 games out of the second Wild Card spot in the National League and are surging as their hitters rake. One of those dudes is someone I haven't shied away from criticizing this season: first baseman Rhys Hoskins. Hoskins and the Phils have captured the imagination of Philly fans this summer in a way I could've never imagined just four or so weeks back.

As I like to say, I call them like I see them. Props are due for Hoskins, who I'm picking as the person who "won" the week in Philly sports. The criteria for this away is super subjective that heavily weighs "vibes" and team success. These Phillies are fun right now and Hoskins' bat over the last week is a crucial reason why.

The Phils were 6-2 in those eight games as well. That'll do!

Rhys Lightning had the first walk-off hit of his career last Monday. With things tied 2-2 in the bottom of the ninth in South Philly against the Marlins, Hoskins came to the plate. With Matt Vierling at second, Hoskins ripped a double to left-center field for the win:

What was important about this play and this game as a whole is that it came after a 13-1 blowout loss against the lowly Diamondbacks at home. The Phils had swept their previous two series and were looking to sweep Arizona as well that Sunday. They were crushed. It had a "same ol' Phillies" energy. Getting over that, coming up big in a huge spot against an organization that has frequently been a thorn in this team's side overcame some of that loser stench that has infected this clubhouse for a decade. It was the type of win the modern Phils simply don't pull off.

This past Tuesday, Hoskins turned in a four-hit, six-RBI game against the Fish:

It was a historic performance for a Phillies first baseman:

Rhys Hoskins has 4 hits and 6 RBI—just the fifth time since 1901 a Phillies’ first baseman has put those numbers up in a game. pic.twitter.com/Hk4nebh3QT

What company. Who can forget the immortal Rico Brogna? "Kitty Bransfield" is one hell of a pre-World War I baseball name.

Even when the Phillies lost on Sunday, "only" taking four of five from the Nats in D.C., Hoskins made me chuckle after faking giving a ball to a fan and throwing back across the infield:

Would I talk some smack if an opposing player did this to fans in Philadelphia? Absolutely. It's hilarious when you remove yourself from the situation. Forgive me from going full "body language doctor," but Hoskins acting kind of like a [redacted] makes me think his game's gotten a greater edge over the last week as this Phils squad overall is upping their play. I dig it.

As long as the Phillies keep winning series, the loser will continue to be Joe Girardi in this column.
Last week's winner: Rob Thomson.