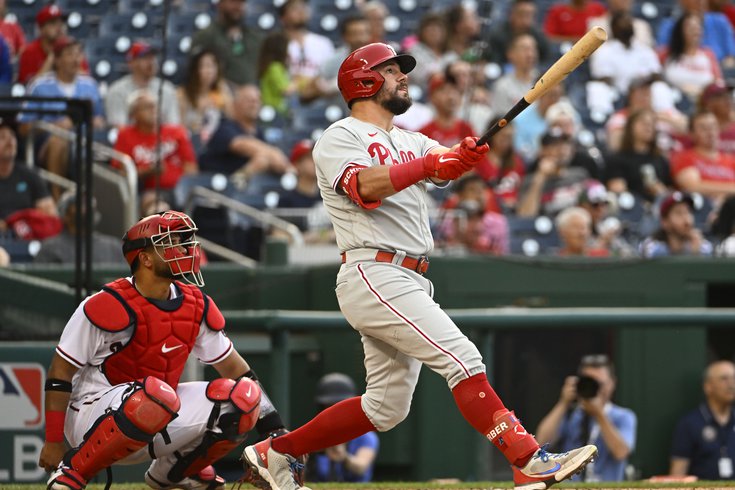 The Phillies laid a dud on Father's Day against the Nationals, losing 9-3, but it's hard to fault a team for not pulling off an uber-rare five-game sweep. The Phils took four out of five in D.C. and are a wild 15-3 in the month of June, bringing their overall record to 36-32. Just a month ago, Philly fans assumed they were going to be relegated to a summer of joyless baseball. Now, the team is carrying an otherwise barren Philly sports landscape.

A few points on the Phillies as of late...

Who's the comparison for June Kyle Schwarber? Game 6 Klay Thompson? Michael Jordan at Madison Square Garden? Playoff Madison Bumgarner? Going into Sunday's game against the Nats, Schwarber was hitting .286 with an on-base percentage of .430, a slugging percentage of .698 and seven homers in 17 June games. He followed that up with a 1-for-4 effort with a run scored in Sunday's loss.

How is Seranthony Dominguez not the Phils' official closer at this point? Managing sports editor Evan Macy texts me this about three times per week. Corey Knebel and Brad Hand are enraging Phillies fans while Dominguez has a 1.73 ERA in 26 innings in 2022. Firing Joe Girardi didn't solve the Phillies' bullpen woes and it's on Rob Thomson to realize the faults of the players on hand.

Dave Dombrowski needs to add some arms to the pen in the next several weeks too.

"I Got Blisters on My Fingers" 🩹

Bryce Harper wasn't in the lineup on Saturday and Sunday. The reigning National League MVP is dealing with a blister on his left index finger that had become infected. He contributed early in the five-game series against his former squad though. Harper had two runs scored on Thursday, went 3-for-4 with a walk in the first half of Friday's doubleheader and came up clutch with a game-tying pinch hit double in the second half.

Phillies fans should feel lucky that this isn't a setback with the UCL injury that has kept Harper out of the field and on DH duty for most of this season. I'd imagine Harper is back to his normal (normal meaning he can barely throw a baseball but still launch them into orbit) self in a couple of days.

Sunday's game was exclusive to premium subscription service Peacock, an NBCUniversal enterprise. The network has been doing Sunday MLB special broadcasts this season. If you have Xfinity has a cable provider, you automatically get Peacock, which is nice, but leaves other Phillies fans who are paying to have NBC Sports Philadelphia as part of their TV packages elsewhere out to dry. Paying even more money than usual to watch this team? It's upsetting people.

They did this on Father's Day of all days! Imagine an angry dad who just wants to sit on the couch and relax for a couple of hours freaking out trying to get the TV to show the Phils game.