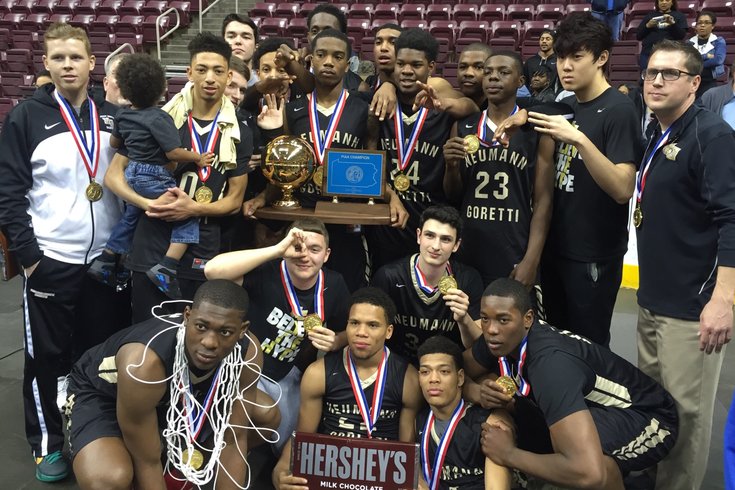 HERSHEY —A debate can be made about what half of Pennsylvania produces the better football talent. But in basketball, there is no question the Philadelphia area dominates the state. Proof comes each March in the PIAA state basketball championships at Hershey's Giant Center.

This year was no different. Six schools represented District 12 (Neumann-Goretti in both boys and girls), which is comprised of the Philadelphia Catholic and Public Leagues, in the eight classifications, which covered boys Class AAAA (Roman Catholic), AAA (Neumann-Goretti), AA (Mastery Charter), A (Math, Civics and Science), and on the girls’ side, Class AAAA (Cardinal O’Hara, Class AAA (Archbishop Wood) and Class AA (Neumann-Goretti).

District 12 had more teams (7) in the state championships than any other. The nearest to Philly was District 7, which is the Western Pennsylvania Interscholastic Athletic League (WPIAL) out in Pittsburgh, which had three.

But it was Neumann-Goretti that made more state history.

With the Saints’ boys program taking the Class AAA state title for the sixth time in the last seven years, and the Saints’ girls winning a consecutive Class AA championship, Neumann-Goretti became the first repeat winner for both girls and boys programs in the 43-year history since the PIAA, the state’s high school governing body, has been holding both girls and boys state championships in basketball (beginning in 1973).

Neumann-Goretti accomplished something over the last two years that had only been done three times before.

In 2009, the first year the Philadelphia Catholic League competed in the PIAA, the state’s high school governing body, Archbishop Carroll’s boys’ and girls’ teams won PIAA state championships, joining an exclusive group as boys’ and girls’ state basketball titlists in the same year, with the Aliquippa boys and girls in 1989 and York Catholic boys and girls in 1979 to accomplish the feat.

Here is a breakdown of the state title games:

This marked the second-straight state title for the Cahillites. This time, behind the Penn State-bound trio of Lamar Stevens, Nazeer Bostick and team catalyst Tony Carr, who combined for 55 of Roman’s 73 points. But this didn’t come without some initial worries.

Allderdice bolted out to a 10-0 lead before Roman scored.

“We found out the game didn’t start at 8:30, it started at 8 and we were down 10-0, but these guys are battle-tested, they weren’t rattled, and once we got a bucket, we settled in,” Roman coach Chris McNesby said. “When you have Tony Carr as your point guard, you can win a lot of things, and I’m sad to see him go. The last month of the season this was all about the seniors and sharing this moment as a team.”

Stevens, an imposing 6-7 presence around the basket who transferred in from Haverford School, finished with a game-high 27 points and grabbed seven rebounds.

“Sometimes we get out to slow starts and we stayed poised,” Carr said. “We got the ball inside down low and got some easy baskets and that got on track. (Stevens) was like a man among boys.”

The Saints have been the most dominant team in the state over the last decade. What was unique about this year’s version is that the only thing the Saints did win was the state title. Roman beat Neumann-Goretti in the Catholic League championship and Del-Val Charter beat the Saints in the District 12 championship.

The Saints, who are actually a Class AA school that plays up to Class AAA, won its third-straight state championship (and sixth in the last seven years) through unusual means.

“I’m proud of the way we were able to get the guys together, and we played great on offense all year and shot the ball well.” Neumann-Goretti coach Carl Arrigale said. “We didn’t shoot well at the Palestra that night against Roman, and right after that, we had the district game. The Catholic League championship was such an emotional game and that took a little something from us.

“We had to get this team focused again after the districts and we started to make our shots in the state playoffs. Don’t let the final score fool you. That Mars team is good. We just got it going in the second quarter. We do want to win it all, the Catholic League, the district and state titles. We won the state title, but winning the Catholic League means a lot to us. The district title is a waste of time to us. But you want to win your last game, and that’s the most important. I’m proud of our guys and how well we shared the ball.”

The Saints 99 points was a state record for points in a state final, eclipsing the 39-year-old mark previously held by Elk Lake in its 94-60 state title win over Shanksville in 1977.

Neumann-Goretti’s Zane Martin, a 6-2 senior guard headed to Towson, led all scorers with 33 points and grabbed five rebounds. Junior guard Quade Green, who will be the most heavily recruited player in the area next year, finished with 26 for the Saints.

Mastery Charter North just couldn’t stop Aliquippa guards Sheldon Jeter and Jassir Jordan, who each scored 22 points in aiding the Quips to their first state championship since 1997 and fifth overall.

The Pumas had their troubles shooting from three-point range, going 3 for 17, and 0-for-7 in the second half. Junior forward Daeqwon Plowden kept Mastery Charter North in it with a game-high 24 points and 11 rebounds.

The Mighty Elephants of Math, Civics & Science had no answer for Kennedy Catholic’s mammoth 6-8, 250-pound senior center Sagaba Konate, who scored 17 points and grabbed 22 rebounds. The West Virginia-bound recruit was unstoppable inside.

Senior Alisha Kebbe was bothered by something after the Saints lost to Archbishop Wood, 40-36, in the Catholic League championship—and snapping the Saints’ 54-game winning streak. The Syracuse-bound guard, who’s arguably the best girls’ player in the state pulled over her coach, Andrea Peterson, the next practice the Saints had apologized to her.

“I had a problem because I felt like I let people down, I didn’t play my best and it was bothering so much that I had to say something,” Kebbe said. “It may be funny to say but the Wood loss did help us. We had grown so used to winning that we took it for granted, and we took Wood for granted. We had more of our season left. We weren’t going to lose again and I wanted to make sure that I did something about it.”

She led the Saints to a rather easy victory over North Star, scoring a game-high 20 points and helping the Saints force 20 turnovers, 15 in the first half.

“I think the Wood loss helped us, and that feeling these girls had in the locker room was the same feeling they had two years ago in the state championship and they didn’t want to feel that way again,” Peterson said. “They didn’t know what it felt like to lose. There was no way that they were going to feel like that again this year. The pressure was off of them after that loss, and we decided to go and have some fun.”

There was no way Bailey Greenberg wasn’t going out with a state title her senior year. The Drexel-bound 5-11 senior forward scored 14 points and grabbed 13 rebounds in helping the Vikings complete the trifecta as Catholic League, District 12 and PIAA state champions.

But it was defense that got the Vikings their first state title since 2012. Wood forced 15 turnovers and smothered Villa Maria into 8-for-40 shooting from the floor (20%).

“There was no way we were going to lose this game,” Greenberg said. “This was my third time here, and the third time is the charm for everything. We were all saying that losing here was not going to be an option for us. Not after the last two years. There was no other option. That was our mindset. It was a great run. Once we started playing together as a team, we had the mentality that nobody was going to beat us.”

Philly hoops fans can get to see the girls who caused so many nightmares the last three years for area teams when Kelly Jekot plays for Villanova next season. The two-time Pennsylvania player of the year couldn’t be stopped by the young Lions, scoring a game-high 28 points on 11-of-15 shooting. Behind Jekot, Cumberland Valley threepeated as state championships, beating Central Bucks West last year and Spring-Ford in 2014.

“Everyone is returning for us, and it definitely still hurt to lose, and Jekot was very hard to guard,” Gardler said. “We know we’ll have a target on our backs next year. I don’t want that feeling of losing again in the state finals.”