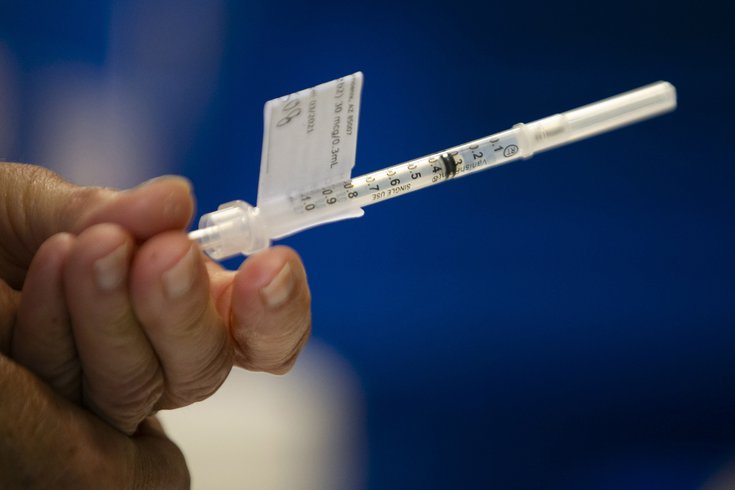 Philadelphia Health Commissioner Dr. Thomas Farley says the current lack of COVID-19 vaccine doses is a "reality check" that the city faces a long road ahead for immunization in 2021. Above, a syringe containing the Pfizer vaccine.

The early stages of Philadelphia's COVID-19 vaccine rollout are reaching the city's health care workers and nursing home residents. But at the rate the health department is receiving new supplies, it would take at least the rest of 2021 to cover the general population.

Right now, the city has been told it will receive 9,500 Moderna vaccines and 9,750 Pfizer vaccines each week through the end of January.

"To be clear, in a city of 1.6 million people, this is not enough," Farley said. "At this rate, it'll take more than 12 months to vaccinate the entire population of the city of Philadelphia. We certainly hope that the delivery of vaccines to us increases."

Across the United States, the rollout of COVID-19 vaccines has been slower than planned. As of last weekend, the country had distributed 13 million vaccine doses, but administered only 4.2 million shots. Two shots delivered three to four weeks apart are necessary to be fully vaccinated.

White House officials had hoped to vaccinate 20 million Americans by the end of December.

Philadelphia has administered 28,476 shots, or about 39% of the doses allocated to the city so far, Farley said. Those rates are higher than in Pennsylvania as a whole and in New Jersey, though the timeline of the city's larger rollout is complicated by future supply uncertainties and efforts to provide the public with realistic expectations.

"We are getting, essentially, the same amount per capita as every other place in the country," Farley said. "So I think there are just not enough doses to go around the country, and probably it's because the producers just can't produce it fast enough. This is a new product, and producing vaccines at this scale is something they haven't done before at this pace. There's just not enough vaccine out there."

The city does not have a shortage of workers available to administer shots, Farley said, but there remains a need for help collecting information from patients and monitoring them during the immediate period after they are vaccinated.

Farley said his remarks about vaccine supply are simply a "reality check" for Philadelphia residents.

"I hope the vaccine manufacturers can speed up production so we have more vaccines," Farley said. "There also are two other vaccines that are in Phase 3 trials that may be licensed, and if they do, that opens up additional entire categories of vaccines that are available to us. I hope that happens in the next few months so that we don't have to go into the fall with this. But it is going to be a long process."

President-elect Joe Biden has signaled that he plans to invoke the Defense Production Act to accelerate growth in vaccine supply during his first 100 days in office.

After Philadelphia vaccinates the first priority groups in health care and nursing home settings, the next group to receive vaccines will be front line essential workers. The precise definition for that group still remains under review by the health department.

"I can tell you that's a large group," Farley said, suggesting it could take several months to get through this population.

So far, the health department has found that Black health care workers and other people of color have been less likely to receive the vaccine than their white counterparts. Farley said he believes this reflects that these groups have less trust in the health care system.

The health department is working with the chief medical officers of Philadelphia hospitals to increase vaccine administration among populations that haven't been as likely to take advantage of the limited availability at this time.

Philadelphia reported 805 new COVID-19 cases Tuesday, bringing the citywide total to 94,127 since the start of the pandemic. Another 111 new probable cases were diagnosed using rapid antigen tests, which the city will now begin combining with its reported number of new cases from PCR tests.

During the week of Dec. 27 through Jan. 2, the city averaged 487 cases per day (a number that will likely rise with more complete data) and a test positivity rate of 9.1%. Fewer tests were administered as a result of the holidays, Farley said.

"We had a decrease in the number of cases, but an increase in the percent positive," Farley said. "Overall, I'd say the epidemic was about the same last week as it was the week before."

Cases had been decreasing in Philadelphia before Christmas and New Year's, prompting Farley to call the leveling off of cases "an unwelcome change."

As of Tuesday, 693 people remained hospitalized with COVID-19 in Philadelphia, a number that has been declining since mid-December.

There were 36 new COVID-19 fatalities reported, bringing the citywide death toll to 2,521.

The city eased some COVID-19 restrictions Monday, keeping with Pennsylvania's relaxation of some mitigation efforts, but the health department continues to evaluate whether it will lift restrictions on indoor dining and other high-risk settings on Jan. 15.

A decision on the city's restrictions, which took effect Nov. 20, may be made by the end of the week.

"We'll watch the case counts over the next few days to determine if we back off on these restrictions after Jan. 15," Farley said.