The eight-episode series debuts April 20 nationwide on PBS, but the local affiliate will delay it until after November's election 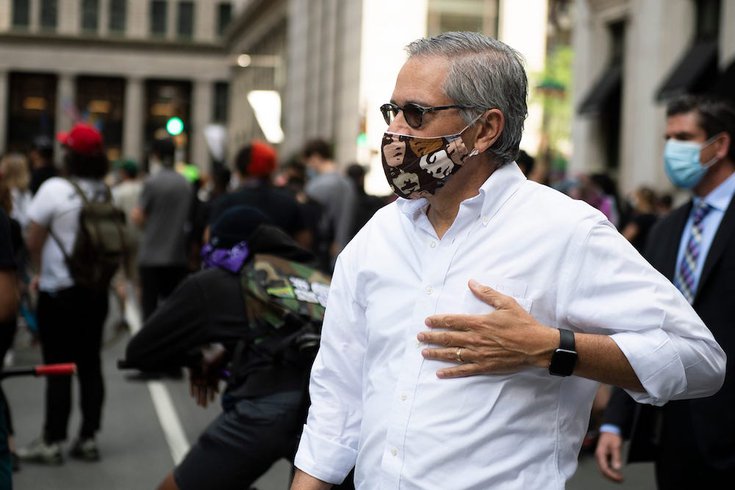 Philadelphia District Attorney Larry Krasner is the subject of "Philly D.A." a new docuseries that will premiere April 20 on PBS.

Philadelphia District Attorney Larry Krasner's progressive policies have garnered him both national recognition and consistent criticism since his election in 2017.

The polarizing official and his efforts to reform Philly's criminal justice system are the subjects of the new docuseries "Philly D.A."

The PBS series follows Krasner through the first three years of his tenure, documenting his various efforts to end mass incarceration, from reforming cash bail to reducing sentences for low-level offenses such as possession of small amounts of marijuana.

Directors Ted Passon and Yoni Brook, who had nearly daily access to Krasner and his team, sought to examine just how successful those efforts have been.

"From the eye of this political storm, filmmakers ... gained unprecedented access into Krasner’s office and behind the scenes of the criminal justice system," according to the PBS show description. "Over the course of eight episodes, 'Philly D.A.' explores the most pressing social issues of our time — police brutality, the opioid crisis, gun violence, and mass incarceration — through the lens of an idealistic team attempting fundamental overhaul from within the system."

The docuseries premiered its first two episodes at the virtual Sundance Film Festival on Feb. 2. PBS will begin airing the weekly show April 20 as part of its "Independent Lens" program.

A new trailer, which dropped Friday, can be viewed below.

The docuseries received some positive reviews after its Sundance premiere. A Variety critic wrote "'Philly D.A.' is an eye-opening exploration inside a powerful big-city government office at a time when tensions in the U.S. are at a boiling point on issues of racial injustice."

But other reviewers thought the series may have went too soft on the district attorney. One IndieWire writer remarked that the show presented "a largely reverent, uncritical view of Krasner himself."

Krasner is well known for his scrutiny of the Philadelphia Police Department, having sued them 75 times as a civil rights lawyer prior to his election as the city's top prosecutor. Since being elected, Krasner has stopped seeking cash bail for low-level crimes, believing the former practice unfairly results in the disproportionate imprisonment of low-income people.

During his first year in office, Krasner also reduced the jail population from 6,500 to 4,700 people, which some viewed as a successful delivery on his promise to target mass incarceration.

The Fraternal Order of the Police Lodge No. 5, and William McSwain, the former U.S. Attorney for the Eastern District of Pennsylvania, have been among the most frequent critics of Krasner. They have accused him of running a "radical experiment" and blamed him for the city's rising crime rates.

WHYY, the Philadelphia-area member station of PBS, will wait to air the show until after the November 2021 municipal elections since Krasner is up for re-election, according to Rolling Stone.

However, local viewers may be able to catch "Philly D.A." online using the free PBS video app. The app allows people to stream shows, depending on their locations, after they are broadcast on PBS.

"Independent Lens" is a PBS series that showcases various documentary films on the network's various nationwide member stations. It features documentaries that did not originally appear on PBS.

"The new season of 'Independent Lens' features a rich variety of documentaries, each telling timely and fascinating stories that raise critically important questions that reflect the times in which we’re living," said Lois Vossen, Executive Producer of the 2020-2021 season.