The lottery system, which gives preference to students in six city ZIP codes, will remain in place 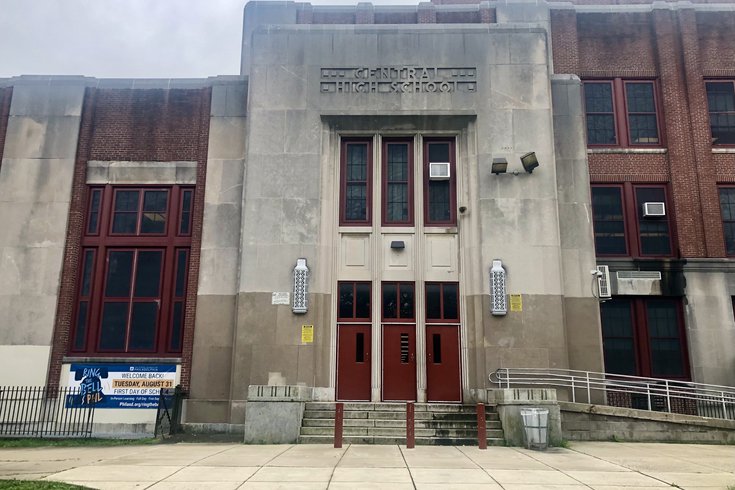 The School District of Philadelphia will again consider students' PSSA test scores for admission at its criteria-based schools, like Central High School, pictured above. The district also will continue to use a lottery to determine which students are offered spots at these schools.

The School District of Philadelphia will return to using PSSA test scores as one of the factors for admission at its magnet schools, but it is dropping the the computer-graded writing assessment, Superintendent Tony Watlington said in a letter to parents earlier this week.

The district will continue to use the computerized lottery and waitlist system to determine which students – among those who meet academic and attendance requirements – are offered spots at the city's 21 special-admissions schools, which the district started calling criteria-based schools last year, Watlington said.

The lottery was new to criteria-based school admissions last fall, and it was implemented with the intent of making the process of getting into the magnet schools more equitable. Previously, the principals at these schools largely decided which students were admitted, based on the pool of students who met the academic requirements for a particular school.

The lottery became a contentious addition to application process partly because of the timing of when the district unveiled this change – it coincided with the opening of the special-admissions school application window – and partly because the district's plan gave preference at the city's top schools to qualified students who lived in six ZIP codes that historically have been underrepresented at those schools.

Last year, Sabriya Jubilee, the school district's director of diversity, equity and inclusion, told the Inquirer, "As a district, we have made a commitment to being an antiracist organization ... (W)e recognize that there will be people who are uncomfortable, but we’re leaning into that discomfort, and we're going to do what we need to do to do right by our schools."

Chalkbeat analyzed racial makeup of the freshman classes starting this month at Masterman, Central, Carver and Palumbo and found the lottery admissions system bolstered the overall proportion of Black and Hispanic students at those schools, although there are variations among each school.

A group of parents are suing the school district in federal court, claiming the weighted lottery used for admissions at the most selective schools is a "blatantly unconstitutional race-based system."

Historically, PSSA test scores had been used as a criteria for magnet school admission prior to the pandemic. But with school districts across Pennsylvania doing remote learning when they would have been administered in 2020, the tests were canceled. In 2021, some Philadelphia schools had returned to hybrid in-person learning, but many students were still entirely remote and did not take the tests.

In lieu of those standardized test scores last year, five of the district’s most selective high schools – Central, Masterman, Palumbo, Parkway Center City and Carver – required students to complete the a computer-graded essay assessment, which became another point of controversy in the process.

Watlington said, for the 2022 applications, the minimum PSSA score requirements at the criteria schools will be adjusted to account for "learning loss and other challenges our students have experienced" due to the pandemic/

The new, minimum, standardized test scores will be announced by the end of September. Theacademic, attendance and other requirements for each magnet school can be found online.

The School District of Philadelphia is hosting three town hall sessions in the coming weeks to provide more information to families about the school selection process.