'The Philly Offensive' asks what is the line between parody and racism, hate and pornography 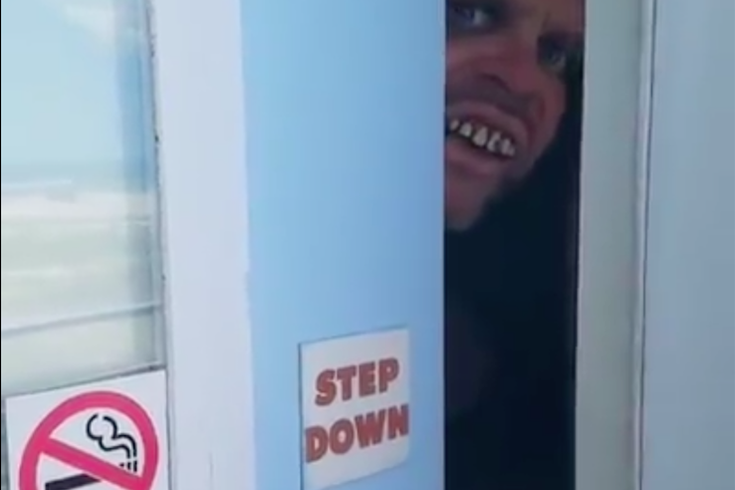 After Facebook closed 'The Philly Offensive' page, the creator set up a new page. This image is from a video that's drawn more than four million views in recent days.

Facebook helps me keep up with everybody’s birthdays. It also enables me to share stories I write more widely than otherwise possible. Thank you for that, Facebook. You’re a blessing.

But I know somebody who doesn’t love you, and I’m here to help him tell you why. So, uh, yeah, please don’t take this post the wrong way, Facebook. Pretty please. Sugar on top.

Meet (or get re-acquainted) with Jay Jay McGuire. If that name rings a bell, perhaps it’s because of the stories that I wrote about the Northeast Philadelphia man’s viral-video exploits?

He talked about his ongoing battle with Facebook’s terms of service, and those intent on repeatedly diming him out to the social-media behemoth for offending their delicate sensibilities.

This isn’t all that surprising considering he calls his operation “The Philly Offensive,” and the vast majority of Philly-based content thereon is – wait for it – offensive.

He just doesn’t think he should get removed from the platform over accusations of spreading hate, pornography or racist content – particularly because he doesn’t feel as if his content is hateful, pornographic or racist.

To him, it’s just goofy prank-like material, the likes of which would be seen if late-night talk shows weren’t restricted by the FCC’s prying eyes over network television. (“I make satire videos of situations that bother me,” reads the About section of his Facebook’s “business” presence.)

Two weeks ago, The Philly Offensive was removed by Facebook.

“Your page ‘The Philly Offensive’ has been removed for violating our Terms of Use,” read the message he shared. “A Facebook Page is a distinct presence used solely for business or promotional purposes. Among other things, Pages that are hateful, threatening, or obscene are not allowed.

“We also take down Pages that attack an individual or group. … Continued misuse of Facebook’s features could result in the permanent loss of your account.”

That message arrived on August 17, just three days after he’d received a “Your Page has been unpublished” notification.

“I always went with Facebook because I got the most views and it was exciting. Going forward, I’m going to build my YouTube and Instagram." – Jay Jay McGuire

That content? Jay Jay thinks it could’ve been a picture of himself shirtless since he was happy about having lost a few pounds. He can’t know for sure, though, and that’s his major complaint.

“When I researched ‘Facebook removed my fan page' on Google, threads came up of people saying they paid huge amounts of money and gained millions of followers, but they were removed without any reason – or at least the only reason given was that they broke Facebook rules,” he continued.

He maintained that this dynamic was akin to “running a business, taking people’s money and then shutting them down” without any mechanism in place to appeal the decision.

This is a tricky issue.

For sure, should you sift through his content intent on being offended, it wouldn’t be difficult to do.

There are skits about race, class and targeting passersby for rants and, as the master of its domain, Facebook has a right to oversee what appears on its pages.

People like Jay Jay – who toe that line with offensively comedic intentions in heart – can find themselves at the mercy of Facebook’s judicial branch.

When his page was taken down, Jay Jay immediately put a new one up. On the plus side, he could post content. On the minus side, he was again scrambling to rebuild an audience the likes of which many content providers often dream of having.

Sure, one of the skits he posted since reviving the site has some 4.4 million views in the past two weeks.

Jay Jay can’t bask in that sort of victory, though.

“There are groups of people who just don’t like me who all get together and report me for anything they can,” said Jay Jay, adding his personal Facebook page was removed for suspicious behavior. “I just had another video go viral. It did three million views yesterday and it’s gaining about 50,000 views every 10 minutes and building my page.

“I really don't care about it, though. They're probably just going to remove it again once people start reporting me.”

To hear Jay Jay tell it, this back-and-forth with Facebook has had an impact on his brand, and left him seeking alternatives to keep it moving forward despite the battles.

“It sucks because I’d probably have around one million followers, which would help me get the attention of someone important by now, like ‘Saturday Night Live’ or something like that,” he claimed.

“I always went with Facebook because I got the most views and it was exciting," he continued. “Going forward, I’m going to build my YouTube and Instagram. YouTube may stop monetization, but they rarely remove anything that is offensive.

"I think I’m just wasting my time with Facebook.”